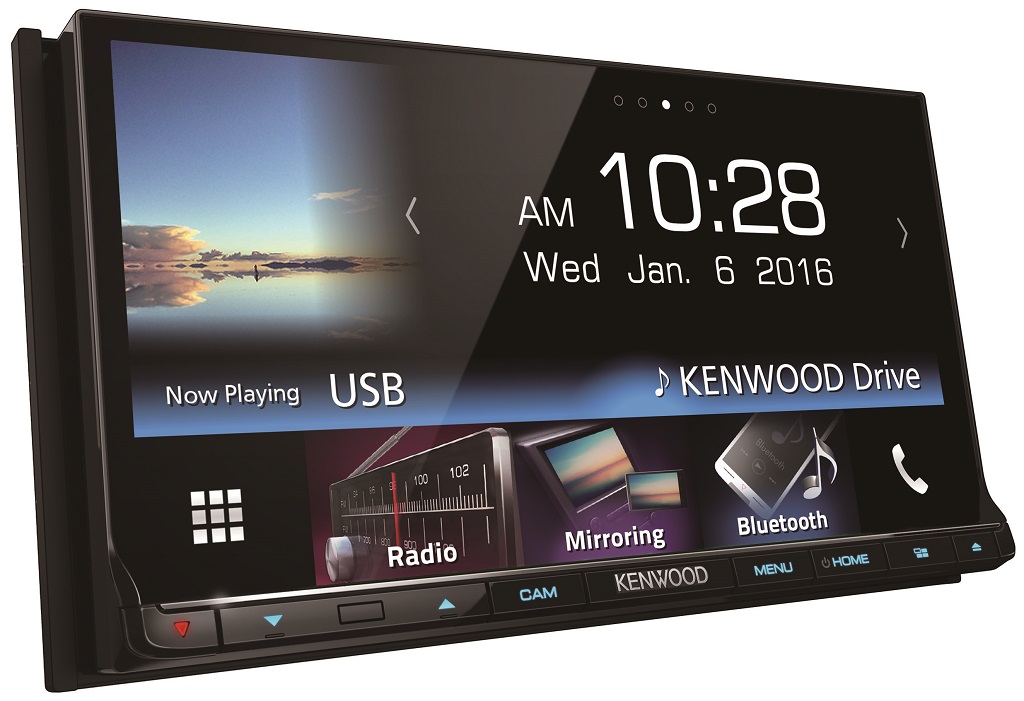 The future is ready. The much anticipated premium car infotainment system is set to make cars enthusiasts ‘live connected, drive connected’. Kenwood’s new premium luxury multimedia audio model DDX9016S is an exclusive product packed with exciting innovative features into one unit with the aim of revolutionizing the driving experience in India.

The flagship DDX9016S multimedia receiver has been specially designed to improve driving keeping safety as paramount so that users do not need to use their phone while driving. This double DIN system has an advanced 7-inch High Definition Wide Capacitive Touch Panel that enables users to see and read content with ease. The screen has a bright, high contrast and clear display that delivers large fonts and icons for instant attention.

This model is equipped with the latest state of art features such as Air Mirroring, Android Auto (for android phone users), Apple Car Play (for iPhone users), alongside a built in DVD,USB, Aux-in, FM Player . Air Mirroring, a Kenwood exclusive feature, helps streaming content from the mobile device and displaying it wirelessly on the multimedia screen. This unique feature is for those who do not like cables floating around in the car and getting tangles. Users can stream music, photos, videos, emails, games etc from the mobile phone to the car infotainment system.

The Android Auto feature enables users to access the existing android apps on the multimedia screen. Users can manage calls, listen and reply to messages and whatsapp, access google maps and listen to the smartphones music with just one tap on the screen. Android auto pairs with the car’s Bluetooth system automatically as soon as the phone is plugged in with the help of a USB cable skipping the cumbersome pairing process necessary for making calls and some other essential features.

Similarly, with Apple CarPlay, the users can sync their Apple device to the vehicle’s infotainment system and access information such as music, navigation, calls, messages, etc, while on the go. With the help of voice commands to Siri voice, users can use functions such as texting, making a call or selecting music.

To ensure safety, special emphasis is given to voice commands. Users can attend calls, send and receive messages all through voice commands with the help of the Bluetooth wired mic that comes along with the system. The Bluetooth provided with the system is version 3.0 which has the speed 8 times faster than the previous version (2.0), a feature not provided in any other infotainment systems in the market.

Additional features include Dual camera where the user can access both front and back camera simultaneously while driving. This feature is especially useful during parking as users can directly adjust rear camera guidelines from the head unit. DDX9016S also has a dual phone hands free compatibility that lets two users pair their respective phones simultaneously unlike other systems where only one phone can be used at a single time.

With a MRP of Rs 64,990 the Kenwood DDX9016S is one of its kind model that provides users with high power sound quality playable up to 192 kHz/24 bit along with ensuring perfect synchronization of sound from all connected speakers. The 13 band equalizer gives an astonishing variety of sound. With voice control and recognition, users can operate infotainment and other vehicle controls without taking their eyes off the road or their hands off the wheel.

“Over the last few years, advancement in automotive electronics and wireless technologies combined with changing lifestyle has made a profound impact in consumer preference from a basic driving experience to latest infotainment solutions. For many car enthusiasts nowadays, their car’s infotainment system is as important as their performance on the road. Kenwood DDX9016S fulfills that aspiration. The DDX9016S offers everything car enthusiasts need and much more, including the latest wireless connectivity, user friendly interface, the ability to play a variety of media files and access to the most up-to-date information and entertainment on-the-go,” said Dhiraj Chawla, AGM Sales, Nippon Audiotronix P Ltd which has the exclusive distribution rights for Kenwood Products in India.

The Union Budget should ideally be more focused to timely implementation of GST. The GST regime will create a competitive business environment and will definitely attract both foreign investment and Make in India initiative […]