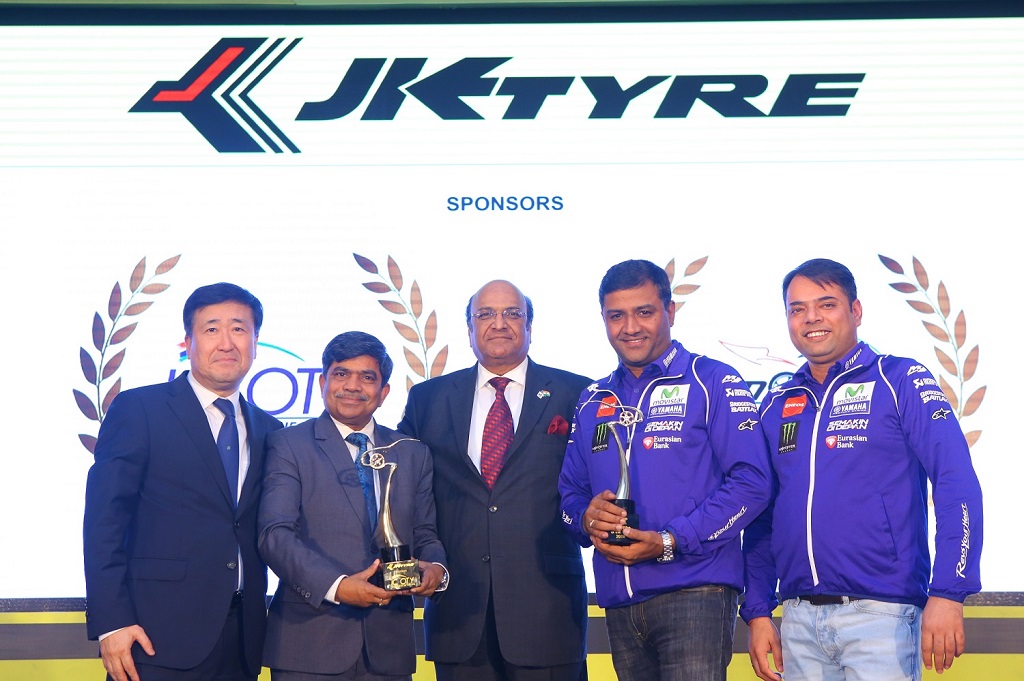 Prestigious ICOTY and IMOTY 2016 awards presented at a classy, musical evening in Delhi

Delhi, December 18, 2014: The Indian auto industry’s most definitive awards are back! ICOTY and IMOTY’s grand award ceremony was held at Hotel Ashoka, amidst a gathering of some of the most illustrious captains of the Indian Automobile industry. The movers and shakers who took away the coveted awards this year are Hyundai Creta and Yamaha R3.

Dr. Raghupati Singhania, Chairman & Managing Director, JK Tyre & Industries Limited, Bob Rupani, Chairman ICOTY 2016 and Aspi Bhathena, Chairman, IMOTY 2016, presented the Indian Car of the Year trophy to the team of Hyundai Motor India Ltd. and the Indian Motorcycle of the Year trophy to the Honda Motor Company on behalf of the esteemed jury of IMOTY 2016.

Congratulating the winners, Dr. Raghupati Singhania, Chairman & Managing Director, JK Tyre & Industries Limited said, “The automobile and auto-ancillary sector in India is growing at a fast pace. The consumer is ever-discerning and automakers seek to outperform each other. In such a competitive environment, JK Tyre and ICOTY & IMOTY Awards endeavour to recognise those who break the clutter with their innovation and deep understanding of the Indian consumer. Congratulations to Hyundai Creta and Yamaha R3 for sailing through the rigorous judging process and emerging victorious.”

This year, the final short list of contenders saw a dozen cars and motorcycles battling it out for two of the automobile industry’s highest honours. The chosen ones were then put through a further round of assessment by the jury members at Lonavla on 4th December 2015. After a strenuous session of evaluation followed by voting, the top three contenders in each category turned out to be Hyundai Creta, Maruti Suzuki Baleno, Renault Kwid and the Yamaha R3, Benelli TNT 300 and Honda CBR650 respectively. The nominated cars and motorcycles were judged on various parameters such as price, fuel economy, styling, comfort, safety, performance, practicality, and technical innovation, value for money and suitability for Indian riding conditions.

Commenting on the occasion, Mr. Y K Koo, MD & CEO, HMIL said, “We are honoured to win the most prestigious automotive award – The Indian car of the Year 2016 for our make in India, made for the world product- the Perfect SUV- Hyundai CRETA. The CRETA is a true expression of ‘New Age’ Hyundai setting new benchmarks in the industry. Winning the third successive ICOTY award symbolizes the trust and faith of customers in the Hyundai brand. We thank all our customers, partners, media and jurors who have chosen CRETA as the Indian Car of the Year and made Hyundai the most loved and trusted car manufacturer. With innovation at its core, Hyundai will make global quality products with cutting edge technologies and fortify the Hyundai brand, caring for our customers in India and global markets.”

“We launched Yamaha YZF-R3 in August 2015 and the responses that we have been receiving is indeed most positive and encouraging. We understand the needs of our customers and therefore pay great attention to details in our products in terms of styling and design. This win too, is awe-inspiring, thank you IMOTY Jury members and JK Tyre” – Roy Kurian, Vice President-Sales & Marketing, Yamaha Motor India Sales Pvt Ltd.

Congratulating the winning car, Mr. Bob Rupani Founder Jury member ICOTY, and Chairman, ICOTY 2016 said, “The ICOTY Award has now clearly become the most credible and coveted auto award in the country. It has a diverse and most experienced jury drawn from nine prominent publications and the entire auto industry now considers this award to be the ultimate recognition of their product. Our partnership with JK Tyre who have been sponsoring the award ceremony right from the inception a decade back, gets stronger with every passing year”

Mr. Aspi Bhatena, Chairman, IMOTY 2016 commented on the winning motorcycle, “IMOTY 2016 has been one of the toughest awards for the Jury in the last eight years as we had lot of very good motorcycles launched during 2015 but most of them were priced on the high side unlike 2014 where the Harley Davidson street 750 was priced at 4.5 lakhs. Last but not the least I would like to thank JK Tyres for their unconditional support for the last eight years.”

Every year, representatives from leading automobile magazines in India constitute the jury of Indian Car of the Year (ICOTY) and Indian Motorcycle of the Year (IMOTY). This year ICOTY and IMOTY are headed by veteran auto journalist Bob Rupani, Chairman ICOTY and Aspi Bhatena, Chairman IMOTY.

This specialist jury of senior Indian automotive journalists is the best from the industry and together they have over 300 years of experience. The jury has proven analytical skills and competence in evaluating and testing cars, as a part of their profession. These jury members are responsible for selecting a single decisive winner in a fair and unbiased and tamper proof manner.

The award ceremony witnessed eminent guests, including scions of the corporate world, senior officials from the auto industry and representatives of industrial bodies. ICOTY & IMOTY are the most credible and coveted automobile awards in the country. The awards have been gaining prominence with each passing year and JK Tyre has been associated with it since its inception.

ICOTY and IMOTY are the bodies formed to recognize exceptional level of competence, innovation and technology in the auto & auto ancillary industries. The awards recognize the company with the highest level of performance in terms of product development, quality, timely delivery, competitive pricing, project management and customer service.

Part of the JK Organisation, JK Tyre & Industries Ltd is a leading tyre manufacturer in India and amongst the top 25 manufacturers in the world with a wide range of products catering to diverse business segments in the automobile industry.

JK Tyre has global presence in 100 countries across six continents with six plants in India and three in Mexico. Currently, the capacity across 9 plants exceeds 20 million tyres per annum.  JK Tyre pioneered radial technology in India way back in 1977 and today is the leader in Truck Bus Radial segment. With over three decades of technological innovation, JK Tyre offers tyres for the entire range – Truck/Bus, LCV, Passenger Cars, MUV and Tractors. The company is the manufacturer of India’s largest OTR Tyre weighing 3.7 tons and 12 feet high.

JK Tyre is a preferred supplier to the automotive Original Equipment Manufacturers and is a partner to some of the biggest names including Maruti Suzuki, Tata Motors, Honda, Ashok Leyland, Mahindra & Mahindra, Volvo Eicher, General Motors, Volkswagen, Fiat, Nissan, TAFE, BEML and Caterpillar India. JK Tyre has been ranked no.1 for the third time in the J.D. Power Asia Pacific’s study on Customer Satisfaction.

In India, its nationwide network comprises of 143 selling locations, 4,000 dealers and over 120 retail outlets branded ‘JK Tyre Steel Wheels’, which are equipped with state-of-the-art wheel servicing equipment. It has also established 17 Truck Radial Tyre Care centres, which operate along all major National Highways on 365 day, 24×7 basis. JK Tyre has established over 18 truck radial total solution showrooms branded “Truck Wheels”.  It was the first to introduce unique concepts like “Dial-a-Tyre” and is the only tyre company to launch a 24×7 on-road tyre assistance initiative called “Fix-a-Tyre”.

JK Tyre actively promotes various disciplines of motorsports in India and has invested enormous resources towards building its infrastructure. The Racing and Karting programmes are the breeding ground for the country’s young motorsport talent and JK Tyre prodigies like Karun Chandhok, Armaan Ebrahim and Aditya Patel have done India proud in the global arena.

New Delhi, February 01, 2016: Hyundai Motor India Ltd, the country’s leading car manufacturer and the largest passenger car exporter registered the domestic sales of 38,016 units and exports of 6,214 units with cumulative sales of 44,230 units for the month […]