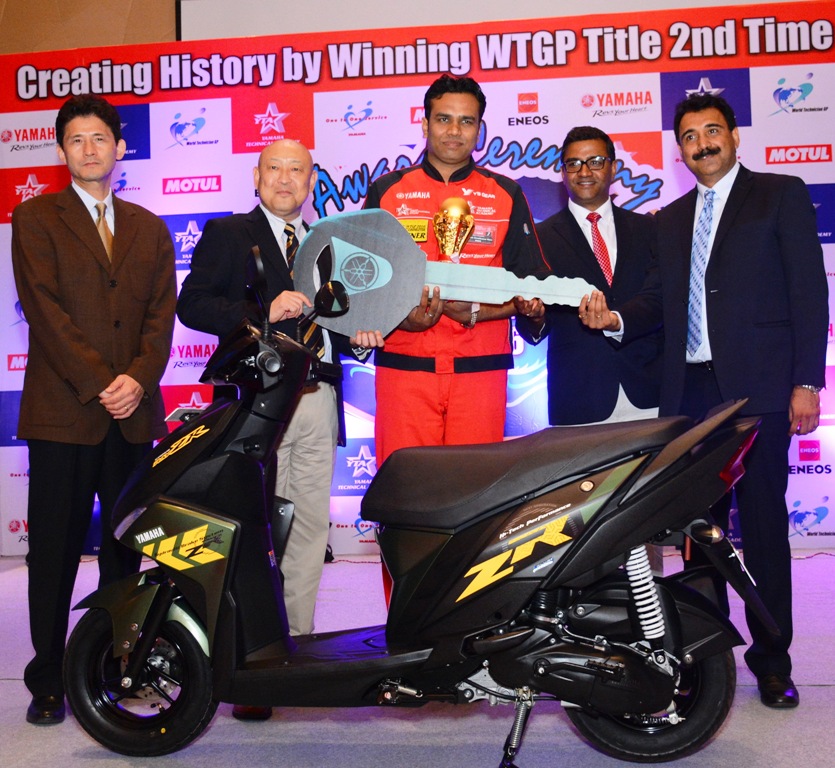 Elaborating on the achievement at Yamaha WTGP 2016, Mr Masaki Asano, Managing Director, Yamaha Motor India Sales Pvt. Ltd., said, “Yamaha Motor Company (YMC) organizes the WTGP contest in Japan once in two years to select the world’s No. 1 Yamaha service technician. Yamaha is delighted to have its champion from India for the second time in a row. It is an honour to felicitate Mr. Jignesh along with his team members and YTA team for their continuous hard effort for the development of World class Technicians. Yamaha would take this opportunity to congratulate the winner Mr. Rana along with his family and the network partner Planet Automobiles who remained continuous aide to shape today’s outstanding victory.”

The 7th Yamaha WTGP witnessed participation from world-class Yamaha YTA Technicians who provide ‘One-to-one’ services to customers on a daily basis. The contest also included the advanced trouble shooting and communication with customers using Yamaha diagnostic tools in order to create confidence among the customers.

Speaking at the event to felicitate the winner, Mr Ravinder Singh, Vice President, Strategy & Planning, Yamaha Motor India Sales Pvt. Ltd said, “It is a moment of pride as India Yamaha Motor carried off the Grand Title for the second time. Yamaha is looking forward to create more such talents and that’s where the expertise of YTA Technicians comes into play. At Yamaha, a constant endeavour to offer exciting and excellent product line up to the customers is backed by providing them with excellent value added services and best in class after sales experience. Through contests like WTGP, Yamaha doesn’t only create world-class technicians but also ensures that customers are delighted and not merely satisfied.”

The Yamaha Technical Academy (YTA) plays a key role in the group’s global education and training program for motorcycle technicians to ensure world-class service that exceeds customer expectations. The pedagogy and training programs of YTA are specially designed based on specific skill-building requirements for each country. Contests are held in each country under National Technician Grand Prix Title for these certified technicians. The winners then compete in the Yamaha World Technician Grand Prix held at YMC, Japan.

In India, IYM organised the National Technician Grand Prix in 2014 and 2015, the winners of which were sent to contest WTGP 2016. The contest had 3 stages of competition for technicians until they could achieve National champion title. The 1st stage (Regional level) has written and practical examination which is conducted by field service team at each dealership. From regional contest, 100 technicians (20 from each region) are picked for the next stage. The 2nd stage (zonal contest) is conducted by zonal training team supported by head office training team at zonal YTA in 4 locations. NTGP final is then conducted by YTA Headquarters of India.

India Yamaha Motor Pvt. Ltd. partnered with Badshah, one of India’s top rappers in the Bollywood industry, to compose and lyricize a theme song to promote its recently launched scooter Cygnus Ray-ZR. The peppy song […]

New Delhi, 7th December, 2017: India Yamaha Motor Pvt. Ltd is delighted to announce that Yamaha FZ 25 has won the top honours at the recently concluded CII Design Excellence Awards under the category of ‘Two-wheeler – commercial’. The […]