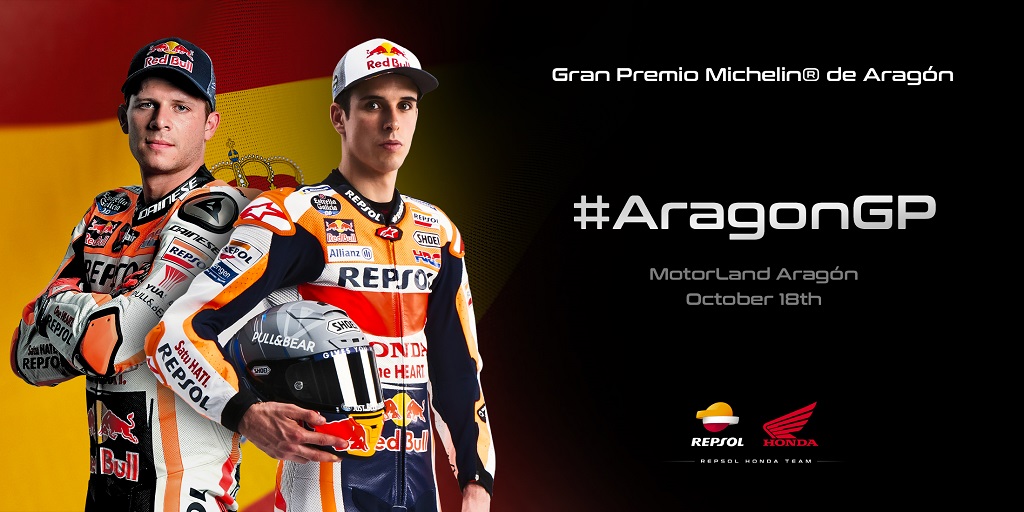 Aragon, October 14, 2020:Fresh off the best result of the year so far, the Repsol Honda Team land in Spain for the first of two races in Aragon primed for more as Marc Marquez continues his rehabilitation at home.

A pair of unforgettable rides in Le Mans saw Alex Marquez charge from 18th to second, taking a debut podium in just his ninth race and his first-time racing in the wet while Stefan Bradl shot through the field to take eighth after starting 21st. The Repsol Honda team arrives back in Spain for the Aragon Grand Prix with renewed vigour.

Claiming Honda’s 849th premier class podium, Alex Marquez proved to the world why he is a double World Champion and now a factory MotoGP rider. Whatever the conditions Aragon presents, the MotoGP rookie is entering the weekend like any other; looking to continue learning and adapting to the Honda RC213V. With two races at the same circuit, Alex is looking to replicate the growth he showed between the two races in Jerez and Misano respectively while continuing to focus on improving his performance in Qualifying.

Stefan Bradl will once again join the Repsol Honda Team for the upcoming race in Aragon as Marc Marquez continues his recovery at home. After five straight days of riding, Bradl has enjoyed a brief rest between races and is now ready to go again after tasting his first points of the season. The HRC Test Rider achieved a tenth-place finish in 2016 when he last raced at the circuit.

“It has been a nice few days enjoying the feeling after Le Mans, I want to say thank you again to everyone who has supported me or sent me a message after the race. But now it is time to reset a little bit and get back to work in Aragon. Qualifying is still the area we need to work on the most as we have shown that our race pace is usually not so bad and we’re able to fight more and more each race. Let’s see what the weather brings, Aragon in the morning can be very cold so we need to pay attention to this. Let’s have a good weekend.”

“I am happy to continue with the Repsol Honda Team in Aragon, but I hope that Marc is continuing to recover well. Coming back to the points last race with a strong ride has given me extra motivation for this weekend in Aragon. It’s a circuit with a lot of variety and some tricky points, especially if the temperatures are cooler you really need to pay attention to the right side of the tyre early in the lap. The aim is to again deliver the best result possible for HRC.”

San Marino, 11 September: Marc Marquez perfectly mastered today’s very tricky wet conditions at Misano, taking his fourth win of the season and the 59th in his career, putting him back at the top of the […]