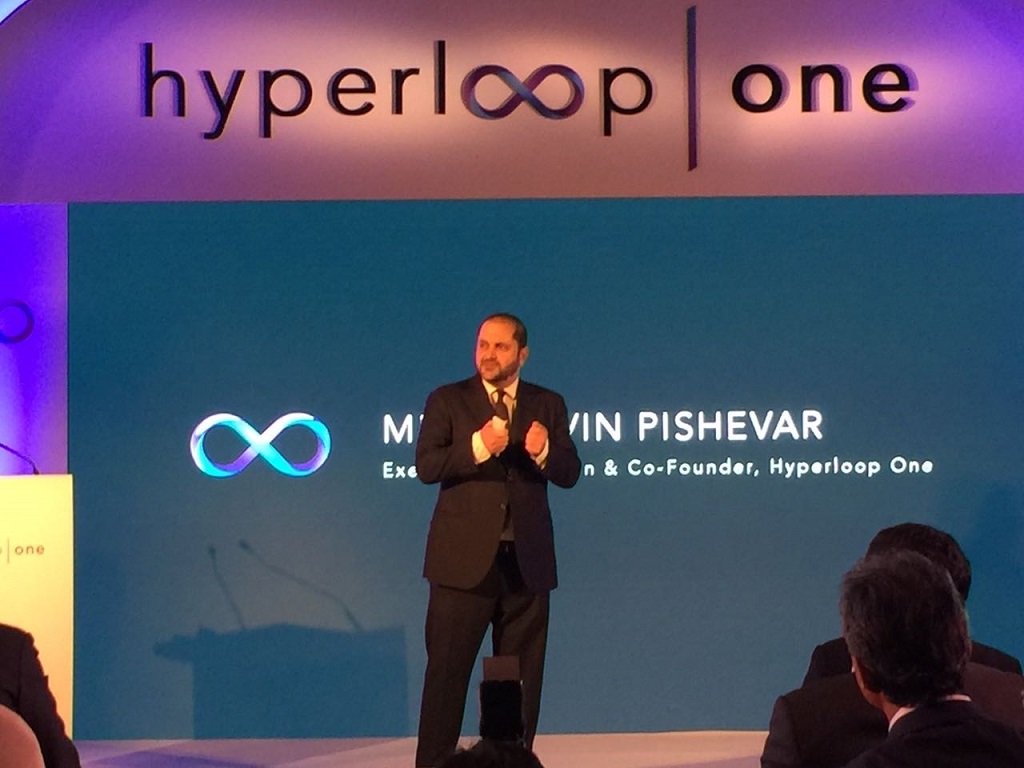 UAE (7 March, 2017) – Hyperloop One, the global leader in developing the world’s first operational Hyperloop, released never-before-seen images of its development site (‘DevLoop’) in the Nevada desert at Middle East Rail, held in Dubai.

Providing the international keynote address at the 11th annual conference, CEO of Hyperloop One, Rob Lloyd, shared a bird’s-eye view of how construction is progressing at the world’s only full-system and full-scale Hyperloop test site, proving the company is well-positioned to deliver the first working Hyperloop. The 500 meter-long DevLoop, which has a diameter of 3.3 meters is located 30 minutes from Las Vegas in the Nevada desert. The company is expected to perform a public trial in the first half of 2017. The DevLoop trial will follow Hyperloop One’s first public test of a prototype propulsion system, which took place in the same area less than twelve months ago in May 2016.

Speaking at the conference, Lloyd also shared the company’s vision for how Hyperloop One could transform the future of the Gulf Cooperation Council (GCC) with a faster, more efficient and cleaner system of mobility. A Hyperloop system is a new mode of transportation, capable of connecting to all modes of existing transportation and helping individuals be anywhere and move anything with on-demand autonomous transport. A Hyperloop One system would ease pressure on existing infrastructure and presents the potential for the Middle East to reinvent and transform transportation.

“While technology is revolutionizing many facets of our lives, we have not seen a radical change in transportation since the Wright brothers introduced air travel over 100 years ago,” said Lloyd. “Tying together the Middle East region would produce greater virtual density, without congestion and pollution, spurring innovation, productivity, job growth and more powerful sharing of knowledge, labor and investment. Building a Hyperloop would vastly impact the economy and make any major city in the GCC accessible within one hour.”

Josh Giegel, President of Engineering and Co-founder of Hyperloop One, joined Lloyd during his presentation at Middle East Rail via video from the DevLoop location in North Las Vegas, Nevada.

“I am so excited to be able to share images of DevLoop at Middle East Rail and update the world on our progress. Our team of more than 150 engineers, technicians and fabricators have been transforming what was, just over five months ago, a barren stretch of desert, into a hive of activity and now home to the world’s first full-scale Hyperloop test site,” said Giegel. “We have come so far in such a short space of time, and our team of over 240 employees are working tirelessly to eliminate the barriers of distance and time and reinvent transportation.”

Not only will a Hyperloop system benefit the GCC economically, but socially, by facilitating easier access to critical infrastructure such as hospitals and schools, expanding access to city attractions and unlocking urban development. It could create a UAE pan-urban area within a 30-minute Hyperloop reach between Abu Dhabi, Dubai and Al Ain.

“With a Hyperloop One system in place, there is ability to further unify the alliance of the GCC, socially, culturally and economically,” said Shervin Pishevar, Executive Chairman and Co-founder of Hyperloop One. “Hyperloop could further enable diversification and could make a huge impact on the region’s relatively young and growing population, reimagining how cities and countries in the region work together. Progress made on the DevLoop in just five months demonstrates how quickly we could bring Hyperloop to the GCC and to the world.”

Benefits of Hyperloop include higher standards of safety than a passenger jet, close to half the construction and lower maintenance costs than high-speed rail and energy usage that is similar to a bicycle per kilogram-kilometer. Hyperloop One estimates that around 4,000 vehicles travel every day between Abu Dhabi & Dubai, with traffic congestion in Dubai costing the economy $800 million in lost working hours. Reducing this commute to 12 minutes opens a whole new realm of options, and Hyperloop One shows an investment in a UAE Hyperloop network could unlock economic value 3.5 to 4 times over high speed rail.

Hyperloop One has announced a series of achievements in the last 12 months, demonstrating the company’s rapid progress in developing the new form of transportation. One week ago, Hyperloop One convened a landmark innovation summit – The Hyperloop One Vision for India ­– in New Delhi, discussing how the company could integrate with and augment India’s vast transportation network with reliable, clean and on-demand autonomous transport, connecting India’s major cities at faster-than-airline speeds.

Held in Dubai on March 7-8, 2017, Middle East Rail brings together more than 350 construction and engineering companies, contractors and solution providers, regional and international railway operators to offer their services and present their plans for the future systems of transportation.

World’s First Autonomous Pod Successfully Completes Inaugural Test Run  New York, August 2, 2017— As the only company in the world that has built an operational Hyperloop system, Hyperloop One continues to make history with the […]