New Delhi, India, February 28, 2017 – Hyperloop One, the global leader in developing the world’s first operational Hyperloop, convened a landmark innovation summit – The Hyperloop One Vision For India in New Delhi today. The summit, which was graced by Shri Suresh Prabhu, Hon’ble Minister of Railways and Shri Amitabh Kant, CEO, NITI Aayog, discussed how Hyperloop One can integrate with and augment India’s vast transport network with reliable, clean, and on-demand autonomous transport, connecting India’s major cities at faster-than-airline speeds. Hyperloop can reinvent and transform transportation in India, making the nation a global leader in innovation, efficiency, and regional economic growth.

The Hyperloop concept has generated excitement and interest from start-ups around the world since it was first proposed in 2013. While other start-ups have not yet moved beyond basic research, Hyperloop One is the only company that is building a functional Hyperloop system. Following the successful public demonstration of the propulsion motor in May 2016 Hyperloop One is on track to run the world’s first full-system test in 2017 in Nevada 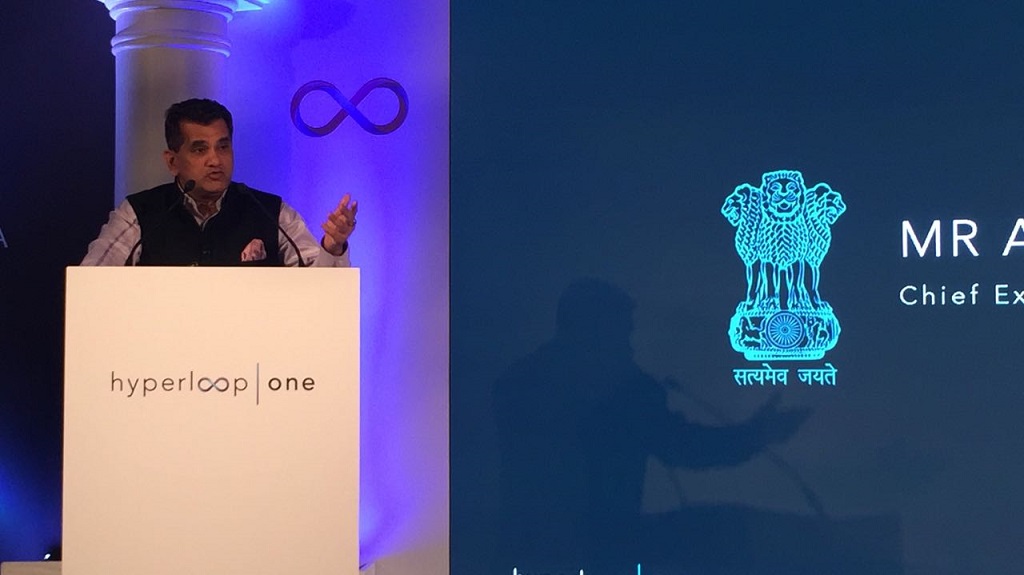 “Prime Minister Narendra Modi’s vision for transforming India and the role he sees of technology in driving this change is indeed remarkable,” said Shervin Pishevar, Executive Chairman of Hyperloop One. “India is an extremely important geography for developing Hyperloop networks and reimagining how cities and regions work. The Prime Minister’s vision of connecting the country is directly aligned with Hyperloop One’s objective of connecting the world. With initiatives such as ‘Make In India’ and ‘Digital India’, we do see ourselves working in this direction in India.”

“Hyperloop One will help accelerate India’s growth towards building substantial infrastructure that is both financially and environmentally sustainable,” said Rob Lloyd, CEO of Hyperloop One. “A transportation system like the Hyperloop will undoubtedly ease the pressure on existing infrastructure while enhancing the quality of life of the people. We are already working with the governments around the world on passenger and freight projects, and we look forward to also partnering with India to support this endeavour.”

The Hyperloop One Vision For India summit also showcased five Hyperloop One Global Challenge (HOGC) semi-finalist teams from India, each of which proposed high-speed transportation routes that could improve the lives of millions of Indian citizens. The HOGC required the teams to develop regional proposals integrating Hyperloop One’s disruptive transport technology to move passengers and freight from point-to-point, swiftly, and on-demand.

The HOGC which was kicked off in May 2016 invited teams across the world to put forward a comprehensive and commercially viable transport plan covering economical and policy aspects of their respective cities, regions and countries. The HOGC received more than 2,600 registrants from 90 countries, and narrowed the field down to 35 semi-finalists across all continents with a potential pipeline worth $26 billion. India led the way with the highest number of registrants and had the most vocal supporters of Hyperloop One on social media. The India semi-finalists include:

Hyperloop One is reinventing transportation by developing the world’s first Hyperloop, an integrated structure to move passengers and cargo between two points immediately, safely, efficiently and sustainably. Our team has the world’s leading experts in engineering, technology and transport project delivery, working in tandem with global partners and investors to make Hyperloop a reality, now. Founded in 2014 and headquartered in Los Angeles, the company is led by CEO Rob Lloyd and co-founded by Executive Chairman Shervin Pishevar and President of Engineering Josh Giegel.