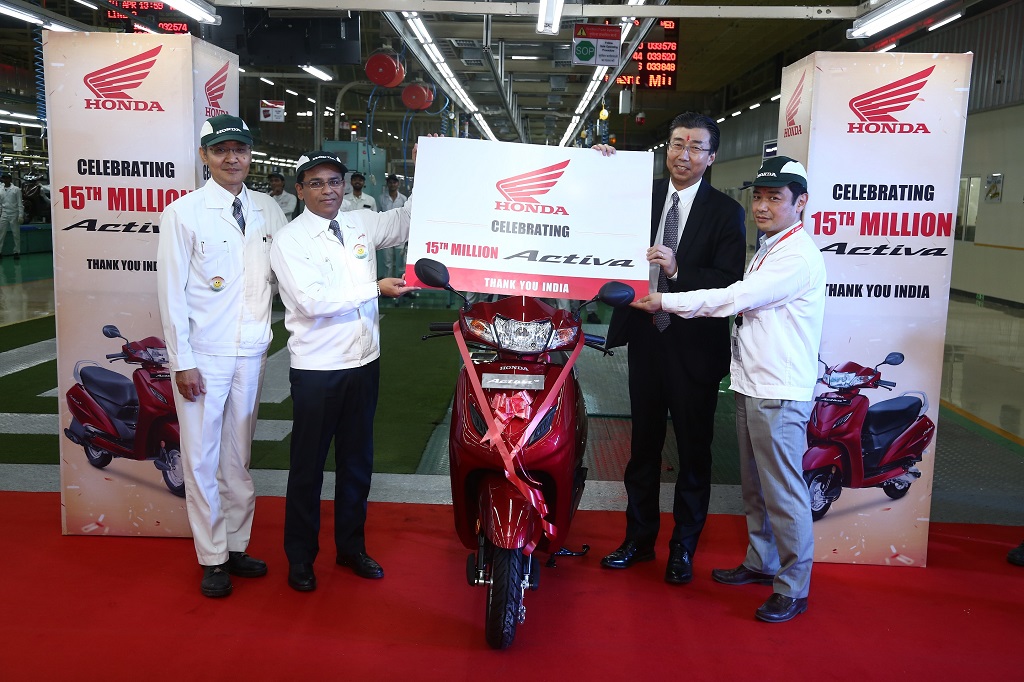 Honda’s iconic Activa has achieved a milestone of 1.5 crore unit cumulative sales, and is India’s FIRST scooter to reach this landmark.

Thanking customers and sharing how Honda’s iconic Activa has changed the way Indians ride to fulfil their dreams, Mr. Minoru Kato, President & CEO, Honda Motorcycle & Scooter India Pvt. Ltd. said, “Globally developing markets similar to India, especially Thailand and Indonesia have already shifted to scooterization. Now, India is getting scooterized like never before. In just 7 years, scooter segment contribution to total industry has doubled from 16% (in 2009-10) to 32% (in 2016-17). And leading this trend is Activa which single-handedly re-activated the declining scooter segment way back in 2001 & become the Number One selling two-wheeler both in India and the World! Honda believes that there is huge future potential for scooterization, more so in tier-II and tier-III towns. The trust of Indian families has already made Activa the first scooter in history of Indian two-wheeler industry to cross 1.5 crore customers landmark.”

Launched in 2001, Activa sold 55,000 units in its debut year. In just 3 years, Activa became the leader in automatic scooter segment.By 2012-13, Activa sales had crossed the 10 lac mark annually but were still behind India’s largest selling two-wheeler (a motorcycle at that time) by a sizable gap of 8.73 lac units.

The situation reversed in the next 4 years. Activa sales more than doubled from 12.05 lac units in FY’2012-13 to 27.59 lac units in FY’2016-17. For the first time in 17 years, Activa (an automatic scooter) has overtaken all motorcycles to become India’s Number One selling 2Wheeler in 2016-17 and leads by a comfortable margin of 2.09 lac units over its nearest competition. 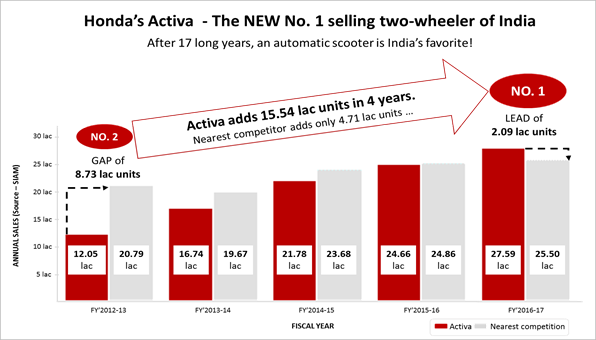 Elaborating on the reason of success of Activa, Mr. Yadvinder Singh Guleria, Senior Vice President – Sales & Marketing, Honda Motorcycle & Scooter India Pvt. Ltd. said, “Activa’s phenomenal success and market leadership is in its continuous evolution ahead of times. In 2001, Activa was launched with CLIC mechanism, tyres with patented tuff-up tube, full metal body powered by the automatic 102cc engine. In 2009, it became industry’s first scooter to come with Combi-Brake System with Equalizer (nearly a decade before CBS is set to be mandatory in two-wheelers by 2019), a bigger and more powerful 110cc engine, convenience of tubeless tyres and completely new design. By 2013, the Activa’s heart got powered by the Honda Eco Technology (HET) which took its mileage in the league of commuter motorcycles. In 2015, the third generation Activa 3G became more stylish. 2017 saw the birth of more stylish BS-IV and AHO Activa 4G with convenient mobile charging port. Backed by Increasing customer demand cutting across all ages, genders and geographies; we are confident that Activa will continue to grow as the No. 1 choice of India.”

Activating India on a growth overdrive:

This evolution has not only retained Activa’s market leadership at home but also expanded it to the world!

Activa’s speed of growth doubled in next one and half years. Activa’s cumulative sales rose to 10 lac units mark by Dec’2005 – with last 5 lac sales added in just half the time.

In July 2015, Activa shattered the glass ceiling to become the first scooter to sell over 1 crore units.

While it took 10 years to achieve the first 50th lac sales, the second 50th lac addition came in 3 years.

The third and the most recent 50th lac addition is the fastest ever, coming in only 1.5 years. 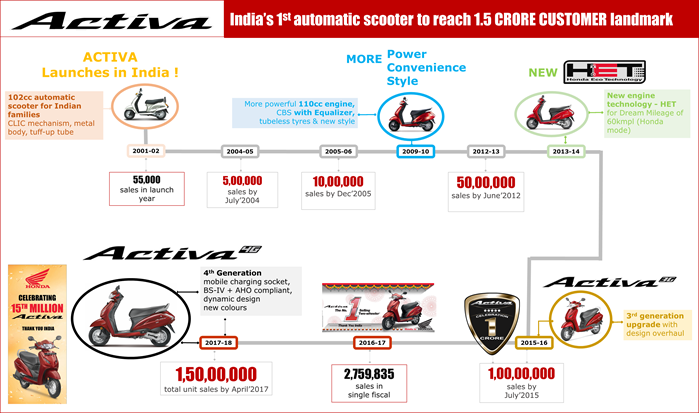 With solid 44% growth in domestic demand, festivities continue into November for Honda