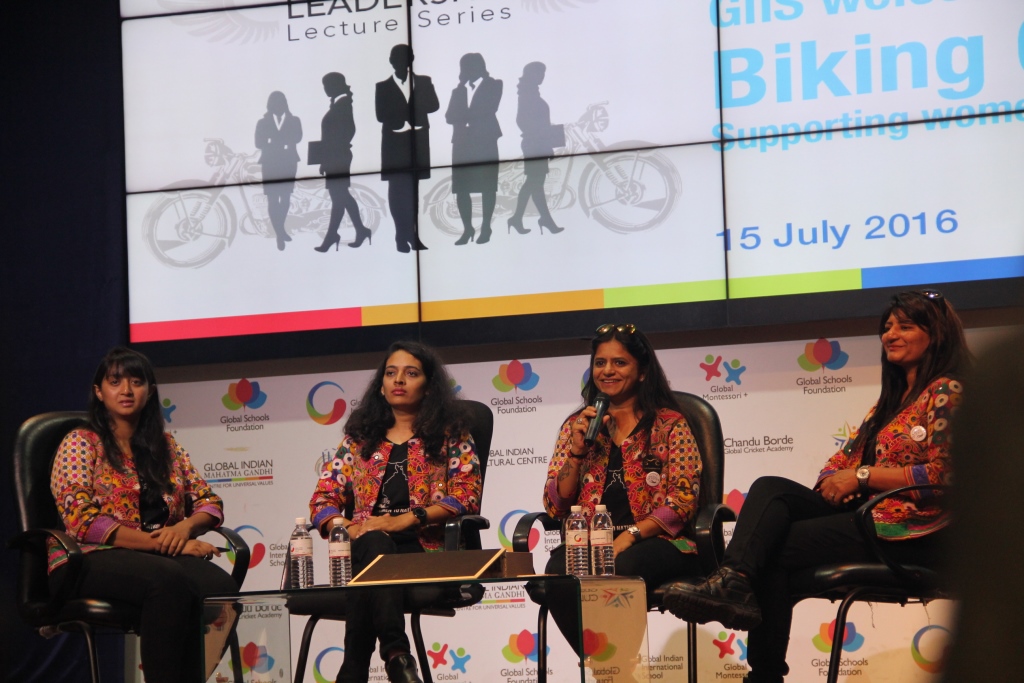 An all-woman biking group, ‘Biking Queens’, reached their final destination Singapore after having started from Surat and travelled on motor cycle through 10 countries.

The Biking Queens, were welcomed with loud cheers by hundreds of students Global Indian International School in Singapore on July 15, 2016, as part of their 10-nation tour of South East Asia to promote the message of Beti Bachao Beti Padhao Abhiyaan or “Save the Girl Child”. The Biking Queens were welcomed by Principal Mrs. Madhu Khanna and several dignitaries from the Global Schools Foundation.

Ms. Sarika was joined by three riders, Ms. Ar Yugma Desai, Ms. Khyati N Desai and Ms. Durriya M Tapia. “Everybody has some special way in which they can contribute to the society. You can only realise your calling by exploring your capabilities by interacting with people from different parts of the world,” shared Ms. Mehta during her interaction with students.

Along their journey, the ‘Biking Queens’ team has met and interacted with several dignitaries and heads of state, including Hon’ble Prime Minister of Bhutan, Mr. Tshering Tobgay in Thimphu; H.E. Prak Sokhonn, Senior Minister and Minister of Foreign Affairs and International Cooperation, at Phnom Penh, Cambodia; and H.E. Ms Vijay Singh Thakur, High Commissioner of India to Singapore.

The Beti Bachao Beti Padhao Abhiyaan, an initiative by the Government of India, was launched by Hon’ble Prime Minister of India, Mr Narendra Modi in the month of January in 2015.

On 19th July 2016, the Biking Girls would be meeting up with the Prime Minister of India in New Delhi and appraising him of their efforts to bring the awareness among thousands of people they met along with journey.
About Global Indian International School

Global Indian International School is established by the Singapore-based not for profit Global Schools Foundation, and is present across 20 campuses in Japan, Malaysia, Thailand, Vietnam, India and United Arab Emirates. Known for its skill-based and learner-centric curricula, GIIS offers holistic learning and personality development opportunities for students.

Adopting a holistic approach to learning and character development, the school’s Nine Gems™ model is a proprietary tool to achieve a balance between academics and experience, mental and physical development, fine arts and performing arts, language skills and creativity, personality development, ethics and entrepreneurship.

Biking Queens charmed by innocent smiles at ‘Nandghar’ in Nagepur