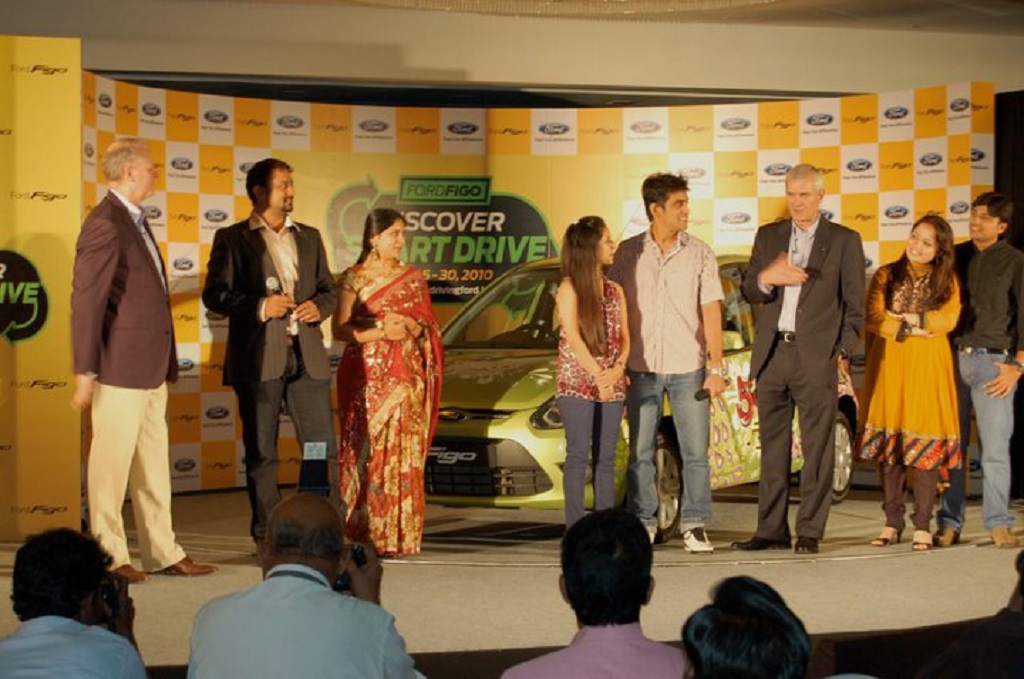 The Ford Figo Discover Smart Drive successfully culminated today in Chennai after completing 2500km in 25 days, passing through 10 cities. The fourth lucky couple – Nischal Ram and Niharika Nischal Ram drove the celebratory Figo into Chennai, completing the fourth and final leg of the scintillating drive from the North to the South of India.

Ford dealers also joined the celebrations and with the tour’s culmination, partnered to voluntarily generate Rs. 20 lakhs for the creatively designed Figo by popular television host and artist Harun Robert (a.k.a. Rob). The money generated will be utilized to improve and provide infrastructure improvements into schools in Kizhkaranai and Chitamanur villages as part of its on-going community development projects in and around the Ford plant in Maraimalai Nagar, near Chennai.

The celebrations at Ford were further amplified with Figo crossing the 50,000 mark, registering a sale of 52,644 units since its launch in India.

In October, Ford recorded its second highest domestic sales of 9,026 units, a 161% year-on-year increase compared to the same month in 2009.

”The Discover Smart Drive has helped us connect and thank consumers across India. The Figo has achieved outstanding results. Figo is the second fastest car model in India to have crossed the 50,000 sales milestone and that is a reflection of the confidence our customers have in us and we will boost the morale further as we move forward” said Michael Boneham, president and managing director, Ford India.

To engage other Figo owners, the “Figo four” shared personal road stories, photos, videos and experiences via their Facebook, Twitter and Orkut profiles and blogs. Customers and fans also followed the drive via Facebook (http://www.facebook.com/fordfigo), Orkut (http://bit.ly/orkutfigo), Twitter (http://twitter.com/fordfigo) and a Driving Ford blog (http://www.drivingford.in) and helped the couples out by posting valuable suggestions, advice and tips along the way.

Talking about Ford India’s marketing strategy to create an integrated campaign, Nigel E Wark, executive director, Marketing, Sales and Services said, “True to its concept, the Discover Smart Drive enabled the lucky couples to explore smart things about India along with smart features of the Figo. Using an integrated approach involving digital, marketing and our growing dealer network, we were able to take the Figo to consumers’ doorstep and have multiple positive conversations on new mediums.”

Seen as the success, the drive was successful in driving positive conversations around the brand and resulted in increasing Figo’s fan base on Facebook to over 15,000 people. Over 600 updates posted on the experiential drive and resulted in showcasing key Figo differentiators such as spaciousness, fuel economy and air conditioning from over 5,000 comments across social networking sites.

“The response that we have got from this campaign has taken Figo’s popularity to a different level. We thank our online supporters also in this endeavour. Figo has been the top-selling vehicle in five out of seven months, since its launch and we wish to sustain this phenomenon.” Wark concluded.

Ford Increases Recruiting, Training of Woman Engineers to Win Battle for Talent in China and Other Asian Markets

Number of women at Ford operations across Asia Pacific has risen more than 125 percent over the past five years; more women in senior leadership roles New telecommuting policy in China builds on female-friendly initiatives […]