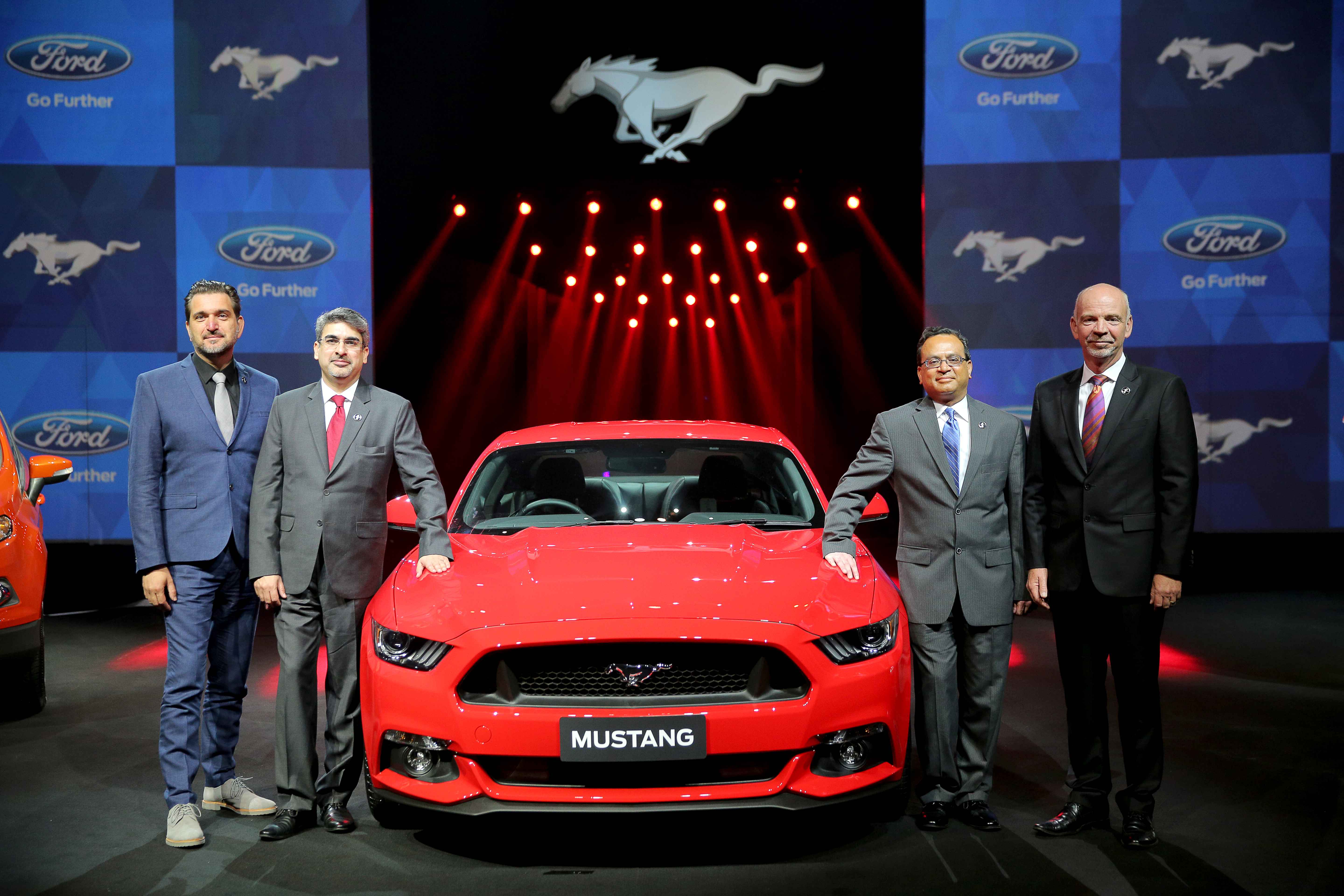 This year, Ford is giving Indian consumers their first opportunity to own the iconic Ford Mustang for themselves. Debuting ahead of the Delhi Auto Expo 2016 and set to hit Indian showrooms later this year, the new Mustang will bring the world-class performance and refinement of Ford’s iconic pony car to India’s roads.

“Throughout its long history, the Ford Mustang has been a symbol of optimism and confidence for people all over the world,” said Nigel Harris, president, Ford India. “The new Mustang is a modern interpretation of the American icon, and we are thrilled to be giving our customers in India the opportunity to experience this piece of automotive history for the first time.”

The clean-sheet design of the new Mustang evokes the essential character of the brand, retaining key design elements – including the long sculpted hood and short rear deck – with contemporary execution. A lower, wider stance with a reduction in roof height, and wider rear fenders and track are the key design features that define the new Mustang.

Inside, drivers will find information and controls all readily accessible in the aviation-inspired cockpit, which is executed with the highest degree of craftsmanship ever found in a Mustang. A large, high-definition display screen puts vehicle information right in front of the driver in the roomier cabin while improved ergonomics and tactile switches and knobs provide better control.

The increased width and a new rear suspension contribute to improved shoulder and hip room for rear-seat passengers, and a more usefully shaped trunk can accommodate two golf bags.

Ford engineers equipped the Mustang with new front and rear suspension systems. At the front, a new perimeter sub-frame helps to stiffen the structure while reducing mass, providing a better foundation for more predictable wheel control that benefits handling, steering, and ride.

At the rear is an all-new integral-link independent rear suspension. The geometry, springs, dampers and bushings all have been specifically modified and tuned for this high-performance application. New aluminum rear knuckles help reduce un-sprung mass for improved ride and handling.

The Smartest Mustang ever

The new Ford Mustang features a range of smart technologies providing drivers with enhanced information, control, and connectivity when they want it. Ford’s award-winning SYNC connectivity system allows drivers to control their in-car entertainment using voice commands, keeping their hands on the wheel and eyes on the road. Premium features like navigation, push button start, passive entry, power folding mirrors, and a rear camera are standard on the all-new Mustang to enhance the driving experience.

And MyColor gauges and ambient lighting help drivers to customize the vehicle’s interior lighting color to their preferences.

“The new Ford Mustang is a one-of-a-kind vehicle and is going to appeal to Indian drivers who value the style, performance, and heritage that the Mustang name brings,” said Harris. “With advanced new technology, an iconic design, and world-class power, it truly sets a new standard.”

Ford 1.0-litre EcoBoost petrol engine named 2017 International Engine of the Year “Best Engine Under 1.0-litre” for the sixth year in a row The fuel-efficient, compact and powerful engine, that powers Ford EcoSport in India, […]

FORD INDIA: Safety is ‘UnSkippable’ – In Ford Cars As well As Its Latest Campaign Innovation

New Delhi, India, June 27, 2017 – After urging customers to make safety a priority with its campaign The Uncomfortable Question, Ford is back with another unique campaign – The UnSkippable highlighting how safety in […]