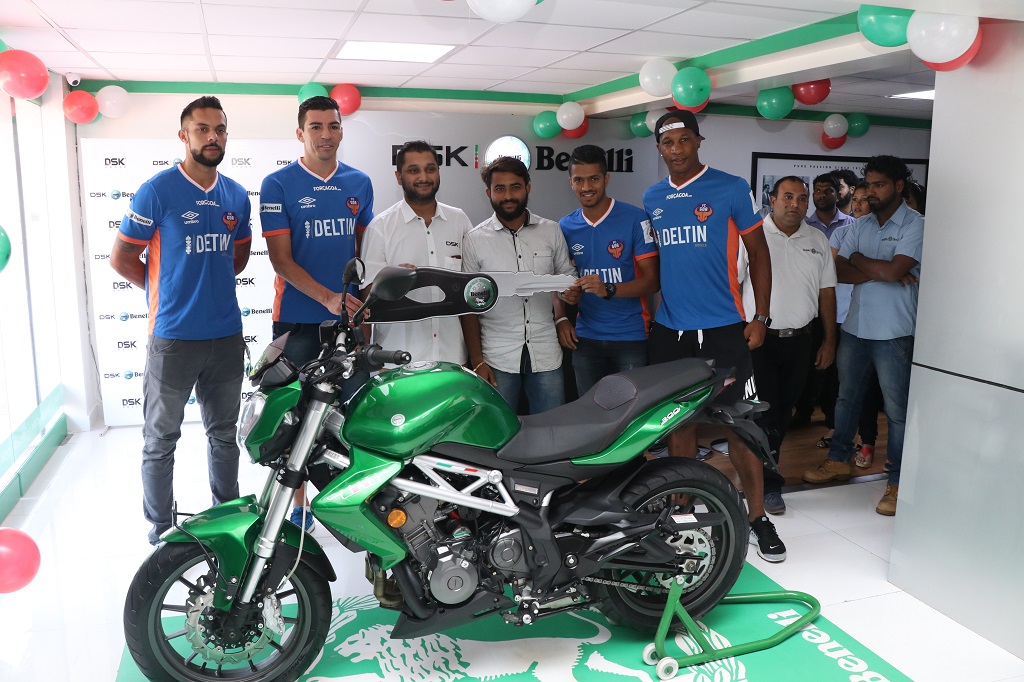 FC Goa players hand over the keys of the 151st superbike; unveil a TNT 25 in FC Goa livery

Further underlining its widespread popularity in Goa, DSK Benelli, one of India’s most well-established and strongest players in the superbike industry, has announced the sale its 151st unit in Goa. By crossing the landmark within a year of launching its operations in Goa, DSK Benelli has also set the record for the most sales done by a superbike brand in the city within one year.

To celebrate this achievement, the keys of the 151st DSK Benelli superbike were handed over to its proud owner by Mr. Shirish Kulkarni, Chairman, DSK Motowheels, along with ISL superstars from the FC Goa team. Adding to the football mania and the celebratory fervour was the unveiling of the one-of-its-kind DSK Benelli TNT 25 embellished in FC Goa livery. 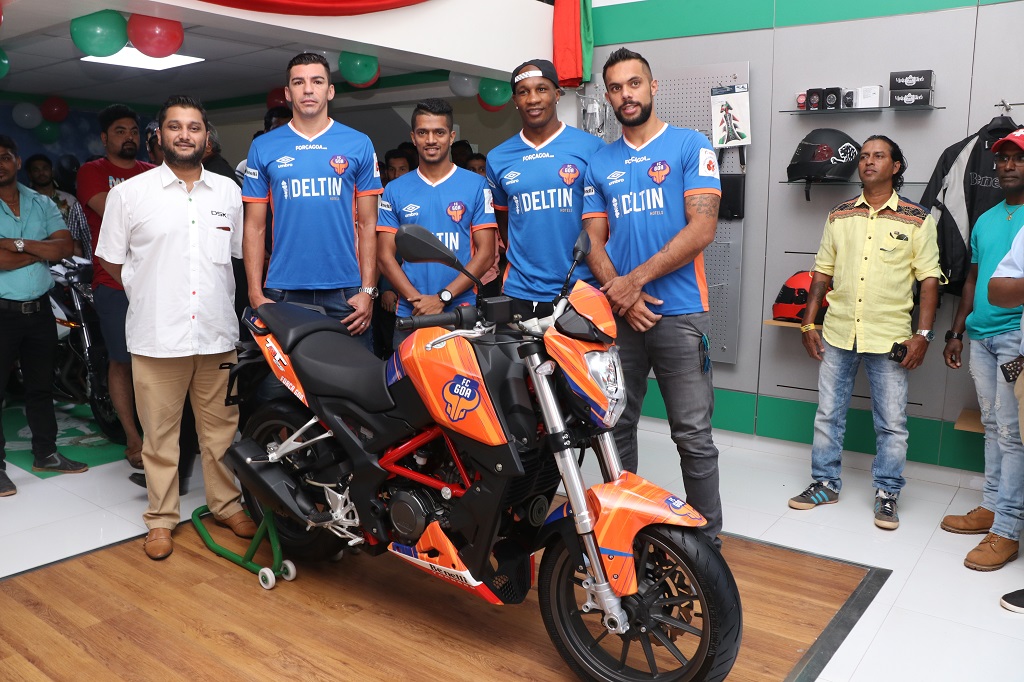 Mr. Shirish Kulkarni, Chairman, DSK Motowheels, said, “When it comes to performance; power, agility, endurance and control are factors of vital importance, so there’s a lot that is similar between a professional football player and a best-in-breed superbike. The intense passion for football and biking that the people of Goa harbour is no secret, so we decided to celebrate our milestone of the fastest sale of 151 superbikes in the city, by blending both these passions. The unveiling of the TNT 25 wrapped in the Forca Goa livery has further added to the success of today’s event, showcasing our support to the FC Goa team.”

A leading diversified business conglomerate in India with a multi-crore turnover. The group has spread its wings in diverse business verticals like Construction, Automobiles, Information Technology, Education and High-end Professional Courses, Pharmaceuticals, Hospitality, Tours & Travels, Banking &  High- End Dairy Solutions, International film production, Digital Products, Investments and Infrastructure, Video Games. The DSK Group is renowned as one of the most ethical and successful groups based in Maharashtra.

Established in 2012, DSK Motowheels, a part of the DSK Group, forayed into the growing automobile sector by entering the niche segment of powerful and aspirational bikes.

As often happens, the history of great industries is born in garages. In our case this is the Benelli Garage”, Where, in 1911, the 6 Benelli brothers Giuseppe, Giovanni, Francesco, Filippo, Domenico and Antonio, known as “Tonino”, repaired and manufactured motorcycle parts. In 1921 the ‘Velomotore’ was created: a single cylinder two stroke 75cc bike adapted to a bicycle frame and the following year it was the turn of the 98cc ‘Motoleggera’, immediately appreciated by the public of that time. The first real Benelli motorcycle, a 175cc model, ridden by Tonino, proved immediately to be a winner in the world of competition. Here began a long list of glorious moments, with more than 1000 victories in the Italian and European Championships and two World Titles won in 1950 and 1969. Many legendary riders have ridden Benelli motorcycles. Besides Tonino, the owner of the company, the Italian riders Ambrosini, Grassetti, Campanelli, Provini, Pasohni, Villa and the internationals  Saarinen, Hailwood and Carruthers.

At the end of the 60’s the last motorcycle of the family owned company was born; the Tornado 650 which developed 50 hp at 7000 rpm, and easily  surpassed 170 km/h. Later the first ownership change took place, but motorcycle production  continued in Pesaro with the ground breaking in line 6 cylinder 750 and 900cc Sei’s which were manufactured up until the early 1980’s. In 2001 the production of the first all new in-line triple powered range began, with the fully faired supersport Tornado 899cc Limited Edition. The addition of the Tornado Naked Tre or TNT for short, and subsequently the Tre-K in both 899 and 1131 cc variants meant that Benelli was truly back in the market of large capacity sports motorcycles. Today Benelli is part of the Qianjiang (QJ) Group, a corporation which produces more than 1.2 million two wheelers per annum. QJ, wishing to respect the tradition of passion which has always guided the history of the Italian brand, will continue manufacturing bikes in Pesaro, the traditional home of Benelli Motorcycles.

DSK Benelli launches 4 exclusive showrooms in Pune (Yerwada), Mumbai (Worli), Vadodara and Bhubaneswar in October 2016. Adding spark to this year’s festive season, DSK Motowheels, one of India’s most well-established and strongest players, has […]

Showroom delivers 25 bikes to customers on the launch day DSK Motowheels, one of India’s most well-established and strongest players in the superbike industry, has announced Ishna Automotive Pvt. Ltd as the new dealership for its […]

DSK Benelli makes Italian superbiking experience accessible with the launch of the TNT 25 Also introducing a complete range of biking accessories including helmets, stickers & CNC parts for personal customization Have you always dreamed […]