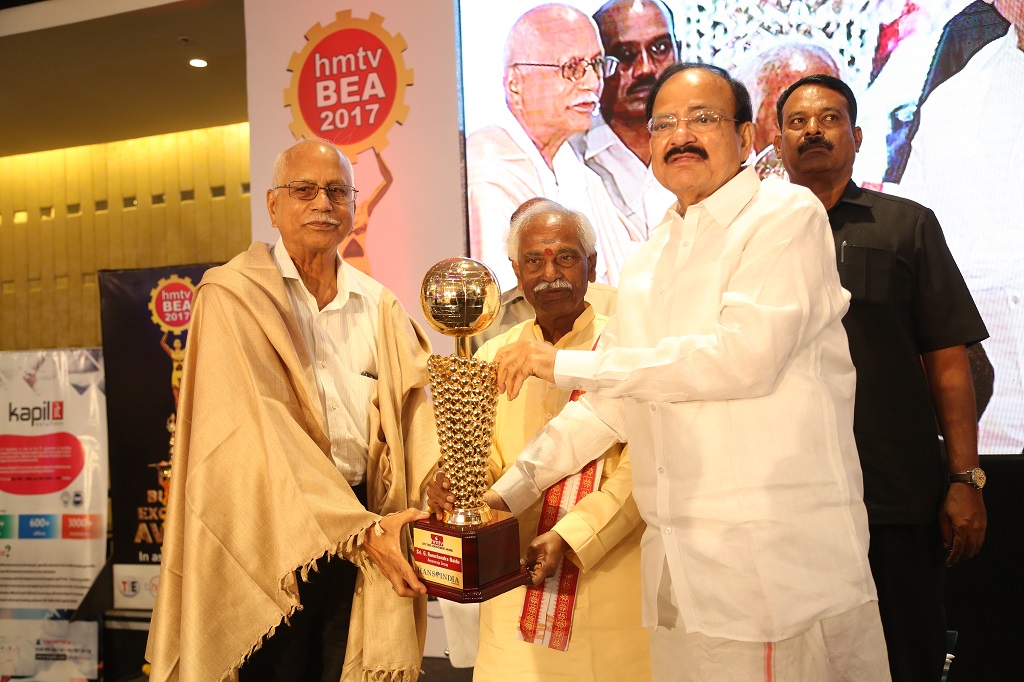 Hyderabad, 9th May, 2017: Amara Raja Group’s Founder and Chairman, Dr. Ramachandra N Galla has been felicitated with the ‘Lifetime Achievement Award’ at the Business Excellence Awards- 2017. The awards were organized by the HMTV news channel, a Hyderabad Media House Ltd. Company.

The Business Excellence Awards were selected by a seven-member jury comprising Mr. Ramesh Loganathan, Professor-IIIT and representatives from CII, FTAPCCI, HYSEA, CREDAI and IT companies. The jury went through hundreds of nominations and chose the best nominees in 14 sectors.

Hyderabad Media House, which runs HMTV, a leading Telugu news channel, and publishes The Hans India, a leading English daily newspaper decided to honour companies, business leaders and entrepreneurs from the two Telugu states. This is an attempt from our side to celebrate entrepreneurial spirit and business acumen. ‘Business Excellence Awards 2017’ were presented to the companies, business leaders and entrepreneurs who excelled. The selection for these awards was done in a professional and transparent way.

83 Rural youth Skilled and awarded Certifications and all of them have been employed 450 students skilled and got employed in past 2 years from the Centre Tirupati, 12th September, 2017: Taking forward its commitment […]

Hyderabad, 15th May, 2017: Mr. B. Jaikrishna, President- (Group HR & New Business Development) has been elected as the new Chairman of Employers’ Federation of Southern India (EFSI)–Telangana & Andhra Pradesh Branch, Hyderabad for the […]