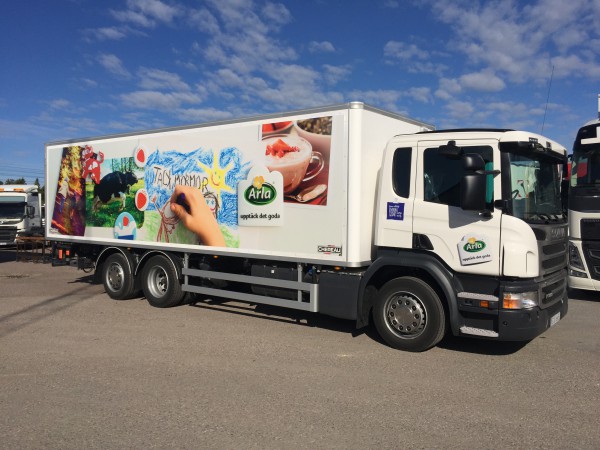 Global dairy giant Arla has an extensive logistics operation within Sweden, allowing for the direct distribution of its dairy products. The company is already meeting its 2020 target of reducing CO2 by 25%, and this year it expects to reduce its emissions level by as much as 70%.

Dairy giant Arla distributes its products within Sweden from three full-range warehouses linked to dairies in the municipalities of Sundsvall, Jönköping, and Järfälla, just north of Stockholm. The turnover rate is high and the volumes large. In total, the company transports around 800 million kilograms of products in Sweden every year to over 100,000 delivery points across the country. Arla owns a fleet of 200 delivery trucks, and privately-owned transport companies contribute another 100 or so trucks.

“Our global environmental plan requires us to reduce carbon dioxide emissions by 25 percent between 2005 and 2020,” says Berne Carlson, Senior Fleet Manager at Arla Sweden. “But at the moment it’s exceedingly easy to invest in alternative fuels. In October 2015, we replaced diesel with hydrotreated vegetable oil (HVO) produced from slaughterhouse waste and rapeseed oil. Even just a couple of years ago, such a change seemed like something from the distant future.”

Further reductions in the pipeline

A local tax exemption on HVO made the use of the fuel financially advantageous. And because it was suitable for use in existing trucks, Arla was able to make the switch from ordinary diesel overnight. The company’s goal of a 25 percent reduction in CO2 emissions was reached in Sweden in 2014, and then the use of rape methyl ester (RME) was adopted for some trucks. So the shift to HVO brought the rate much lower.

”Across the whole of 2016 we expect to reach a 67 to 70 percent reduction and attain an emissions level of under 12,000 tonnes of carbon dioxide,” says Carlson.

Adding ethanol to the mix

At the same time, Arla isn’t content to put all its eggs in one basket in terms of alternative fuels. For this reason, the company has now become the first to introduce trucks that run on locally-produced ethanol from the Agroetanol facility owned by the Lantmännen agricultural cooperative.

“HVO is going to become a scarce commodity, and we won’t accept palm oil as a raw material,” says Carlson. “And the situation also changes rapidly if there’s a change in the taxation situation, as was the case for RME. This makes ethanol interesting, especially for city vehicle distribution.”

Starting in March 2016, Scania delivered a total of 17 new trucks to Arla in Järfälla for use in distribution work in the Stockholm area and in Uppsala. The vehicles consist of 10 two-axle trucks, five three-axle trucks, and two ’shoe boxes’ with high, adjustable roofs. A filling station for the new ethanol is also opening in Järfälla.

“What we’re using here is a fuel that another farmer-owned cooperative has produced locally from cereal-industry residual products,” says Carlson. “It feels extremely stimulating.”

The economic, environmental and social advantages of permitting nighttime deliveries far outweigh the added noise disturbance. That is the conclusion of a two-year extensive study in Stockholm, which normally prohibits truck deliveries from 10 p.m. […]

Norway Post Bring has purchased 130 Scania trucks for delivery until March 2017. It currently operates 950 trucks in Norway and is in the process of modernising its fleet. “It’s important for us to have […]

New skills for cross-border drivers in Hong Kong -With driver training from Scania, the bus company GDHK has become a role model for the ever-growing cross-border market.

This year 250 million passengers will cross the border between Hong Kong and Shenzhen in southern China. With driver training from Scania and an unconventional management style, the bus company GDHK has become a role […]