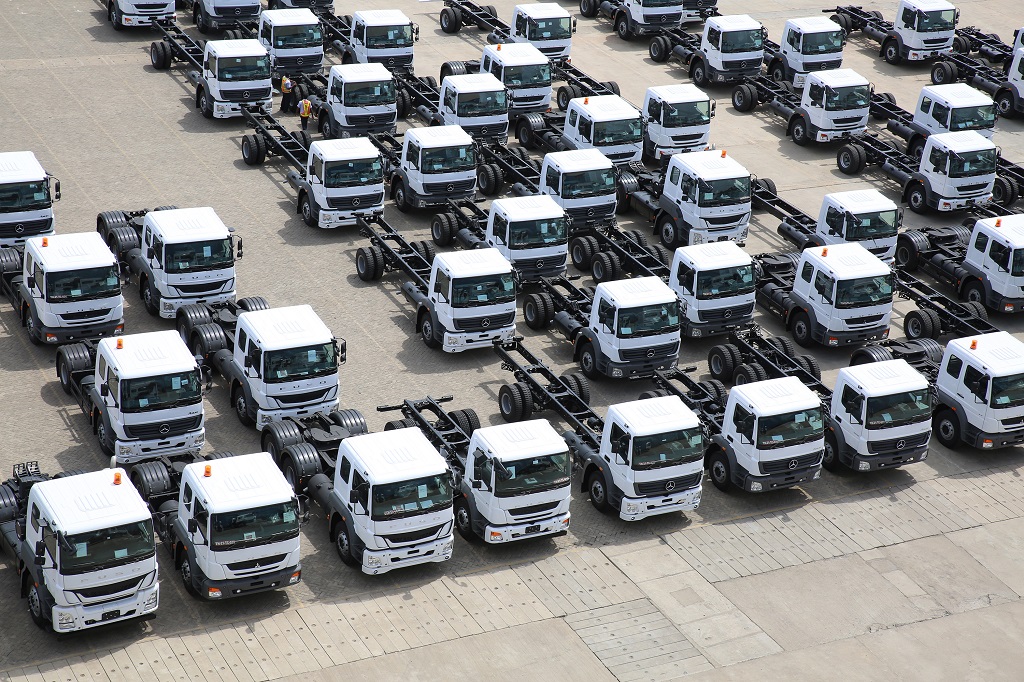 Chennai – Daimler India Commercial Vehicles (DICV) celebrates the next important milestone in its export business. Less than four years after the kick-off, the 10,000th exports vehicle rolled onto the ship at Kamarajar Port near Chennai. The milestone vehicle, a Mercedes-Benz 40-ton heavy- duty tractor for a customer in Indonesia, is part of a batch of about 250 trucks on the way to various markets in South-East Asia.

Mr. Marc Llistosella, President and CEO of MFTBC and Head of Daimler Trucks Asia: “10,000 trucks exported are only a start. We are leveraging additional potentials in growth markets with reliable, efficient high-quality trucks built at our Indian manufacturing plant. There will be continuous significant growth in this business for our FUSO and Mercedes-Benz brands.”

DICV’s export product range, manufactured on the same production lines as its domestic BharatBenz portfolio according to global Daimler standards, features medium-duty (9-16 tonnes) and heavy-duty (16-49 tonnes) trucks. Developed and rigorously tested to meet the diverse requirements of the target markets in Asia, the Middle East, Africa, and Latin America, they are opening additional growth opportunities for Daimler Trucks – the world’s leading truck manufacturer with a global reach.

Mr. Erich Nesselhauf, Managing Director and CEO, Daimler India Commercial Vehicles said: “Our exports business has been developing extremely well. Since the launch in 2013, we have doubled our figures each year, and we aim for further significant growth as we will expand to serve more than 40 markets on three continents by the end of the year.”

With regard to the ‘Make in India’ initiative, Mr. Nesselhauf added: “Make in India works really well for manufacturers like us who can offer modern products and are able to meet international norms and customer expectations.”

Beyond completely built trucks, DICV has already exported more than 1,000 bus chassis produced at its bus plant and is ramping up volumes of its Mercedes-Benz school bus which has been launched in the Middle East. The company has also been supplying FUSO truck CKD kits to Kenya for local assembly by a FUSO partner in Kenya since March 2016, and to Daimler Truck’s production plant in East London/South Africa, where local assembly just began in May 2017.

Daimler Trucks Asia at a Glance