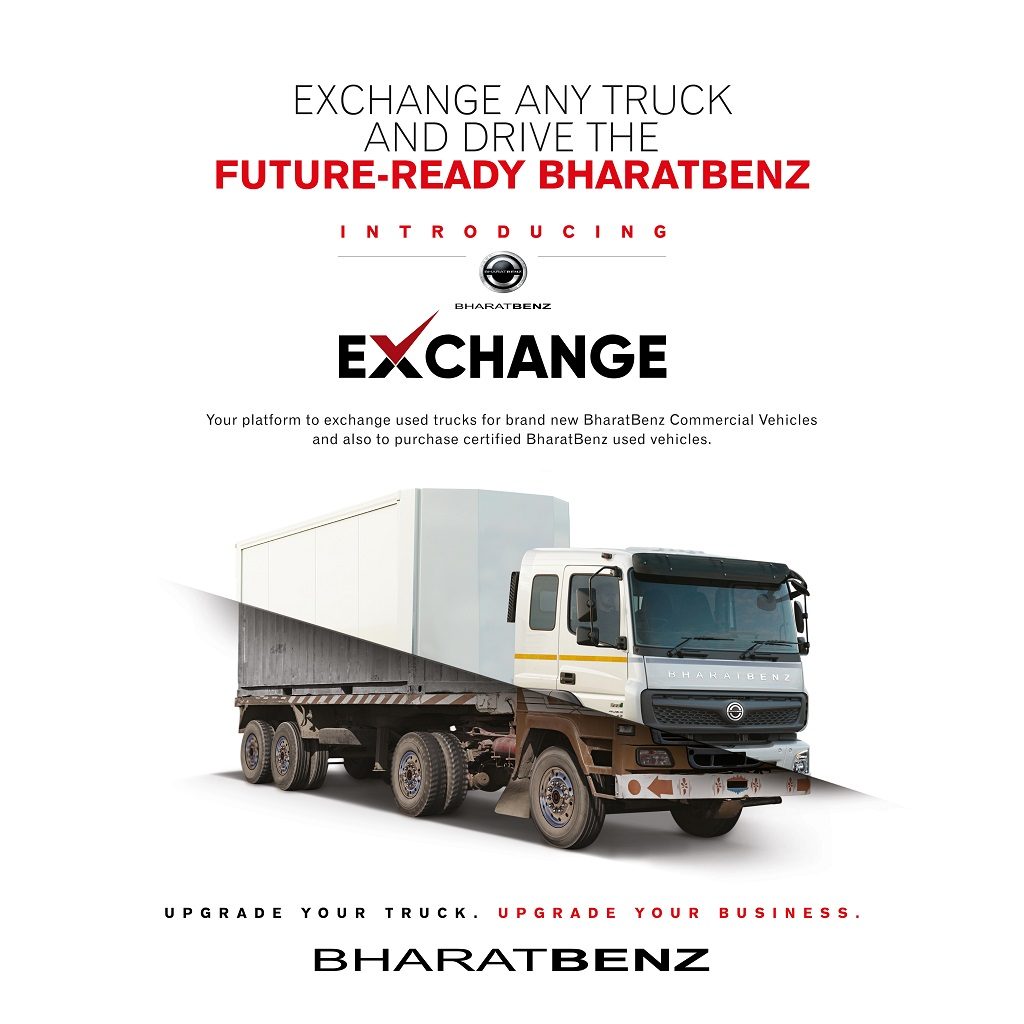 Chennai – Daimler India Commercial Vehicles (DICV) today announced the launch of ‘BharatBenz Exchange’, its new offer to the used commercial vehicle segment. By leveraging its growing customer base and nation-wide dealer network, BharatBenz Exchange will supplement its existing new vehicle sales model by offering an exchange platform where customers can exchange their used vehicles of any brand for new or used BharatBenz vehicles.

Mr. Satyakam Arya, Managing Director & CEO, Daimler India Commercial Vehicles said, “As the number of BharatBenz owners rapidly increases, we feel it is the right time to tap the massive potential presented by the used commercial vehicle segment. We look forward to delivering BharatBenz’s superior quality, service and TCO to an even larger customer base.”

BharatBenz Exchange will provide buyers with a carefully-picked pool of used trucks that have undergone thorough quality checks, made available via its nationwide dealership network.

“With BharatBenz Exchange, used vehicle sellers and buyers no longer have to haggle over the right price or worry about incomplete paperwork. Our trained experts will ensure that both parties have the best customer experience. We see enormous potential here to show even more customers the quality of BharatBenz products and services. This also ensures the complete lifecycle of the vehicle is taken care of,” added Mr. Rajaram Krishnamurthy, Vice President Marketing & Sales and Customer Service.

BharatBenz Exchange aims to provide customers with the best resale value and smooth management of the end-to-end documentation process for optimum customer satisfaction. The experts at BharatBenz will also support used vehicle buyers (both individuals and companies) with a large portfolio of vehicles suitable to their application by providing the right AMC and Extended Warranty options for their range of refurbished trucks. The team will even assist in identifying the right financing partner.

DICV is in the process of digitalizing services to better promote the used vehicle business. Interested buyers and sellers can check the BharatBenz used vehicle sections on www.bharatbenz.com and browse the catalogue. DICV is also looking into tie-ups with leading online Used Vehicle platforms and auction houses in order to reach a larger customer base.

Daimler India Commercial Vehicles (DICV), a wholly owned subsidiary of Daimler AG, Germany and operating under the umbrella of Daimler Trucks Asia, is a full-fledged commercial vehicle player in the Indian market and the only Daimler entity worldwide with a brand dedicated to its home market: BharatBenz. DICV produces and sells in India above 9 to 55 tons trucks as well as BharatBenz buses, Mercedes-Benz coaches and bus chassis. DICV’s state-of-the-art manufacturing plant at Oragadam near Chennai spreads over 400 acres (160 hectares) including a highly modern test track and is home to the company’s headquarters, R&D and training operations. With one global quality standard, it also produces for Daimler Trucks’ brands of FUSO, Mercedes-Benz and Freightliner. Products and parts are exported to more than 50 markets in the Africa, Asia, Latin America and the Middle East. DICV represents an overall investment of more than INR 5,500 crores.

The BharatBenz brand is tailored for the Indian market and its demanding customer requirements by Daimler AG, the world’s leading CV manufacturer with a global reach. First unveiled in February 2011, the brand was launched in September 2012 with the introduction of its heavy-duty haulage trucks. The portfolio was expanded with the launch of medium-duty haulage trucks (2013), construction & mining trucks and tractors (2014), and buses (2015). The pan Indian BharatBenz sales and service network of more than 235 touchpoints is being continuously expanded. Within eight years after the market launch, BharatBenz has already produced over 100,000 vehicles – an unprecedented ramp-up in the world’s toughest commercial vehicle market.

For the first time CKD assembly of the all-new robust FUSO range begins at the AVA assembly-plant in Mombasa, Kenya–adding to the existing portfolio of FUSO vehicles whose kits are imported from Japan. Previously the […]