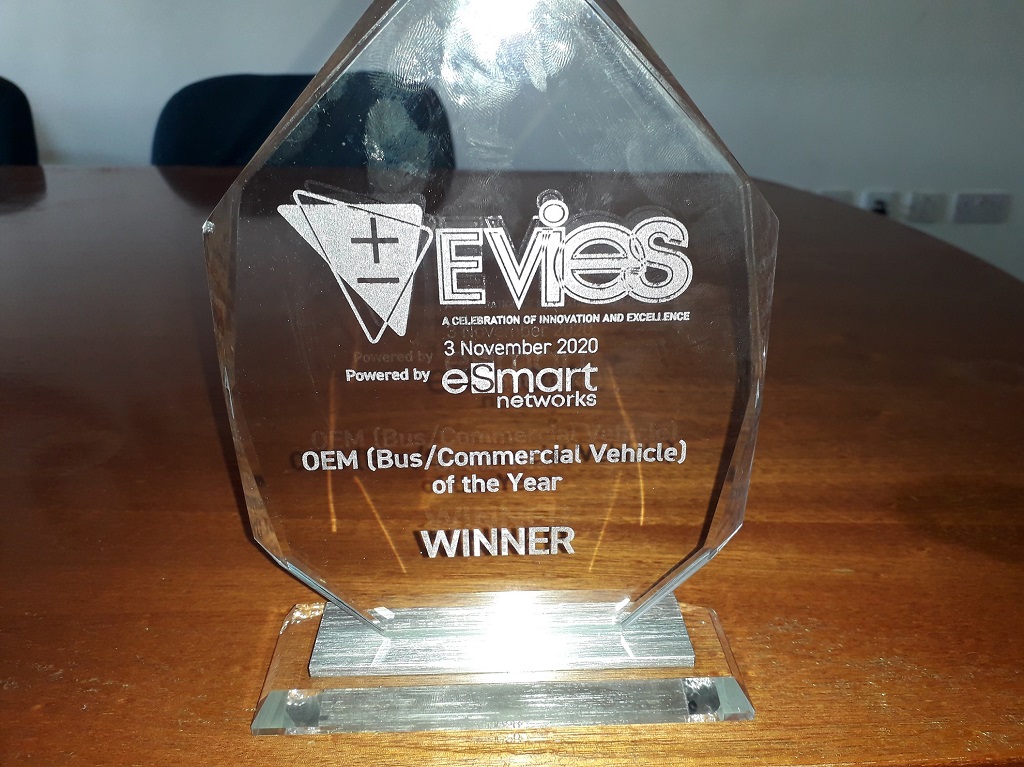 Chennai, November 05, 2020: Ashok Leyland, flagship of the Hinduja Group, today announced another significant milestone by its subsidiary Optare PLC. Optare’s MetroDecker EV has won OEM of the Year (Bus/Commercial Vehicle) at the prestigious 2020 EVIEs Awards. The Electric Vehicle Innovation & Excellence (EVIE) Awards are designed to shine a light on innovation and excellence in the emerging EV sector. EVIEs is organised by Solar Energy Events which has pioneered a series of international platforms focused on the solar and next energy sector.

Mr. Vipin Sondhi, MD & CEO, Ashok Leyland, said, “Optare continues to do some ground-breaking work and a recognition like this motivates us to do even better, taking the industry to the next level. Being acknowledged as the best in a highly competitive market, is another milestone in our journey. Optare will continue to work towards technologies and innovations for sustainable solutions for public transport for cleaner, emission-free cities. Optare continues to be strategically important for Ashok Leyland as it is emerging as a leading player in the EV space in a sophisticated market such as UK.”

The Metrodecker EVs are the first new vehicles that have entered service with First UK Bus since it announced its commitment to achieve an entirely zero-emission fleet by 2035. The first Optare battery-electric buses – Versa EVs – entered service on the York park-and-ride network in 2014. More recently, 21 MetroDecker EVs were launched with First York in July this year. This followed the successful launch of the EV Double Decker in London with Metroline, this Metrodecker is a part of the 107 Metrodecker EV order Optare has received since the product was launched 20 months ago.

Each Metrodecker EV with First York can carry 98 passengers, although that capacity is currently restricted due to social distancing measures. The model delivers a range in excess of 160 miles. The buses carry a new blue-based brand for the York park-and-ride network. They have audio-visual next stop announcements, Wi-Fi and USB charging points. These Metrodecker EVs have been developed from prototype by Optare in a partnership with First York and the York City Council which began three years ago. They are made and fully assembled at Optare’s factory in Sherburn.