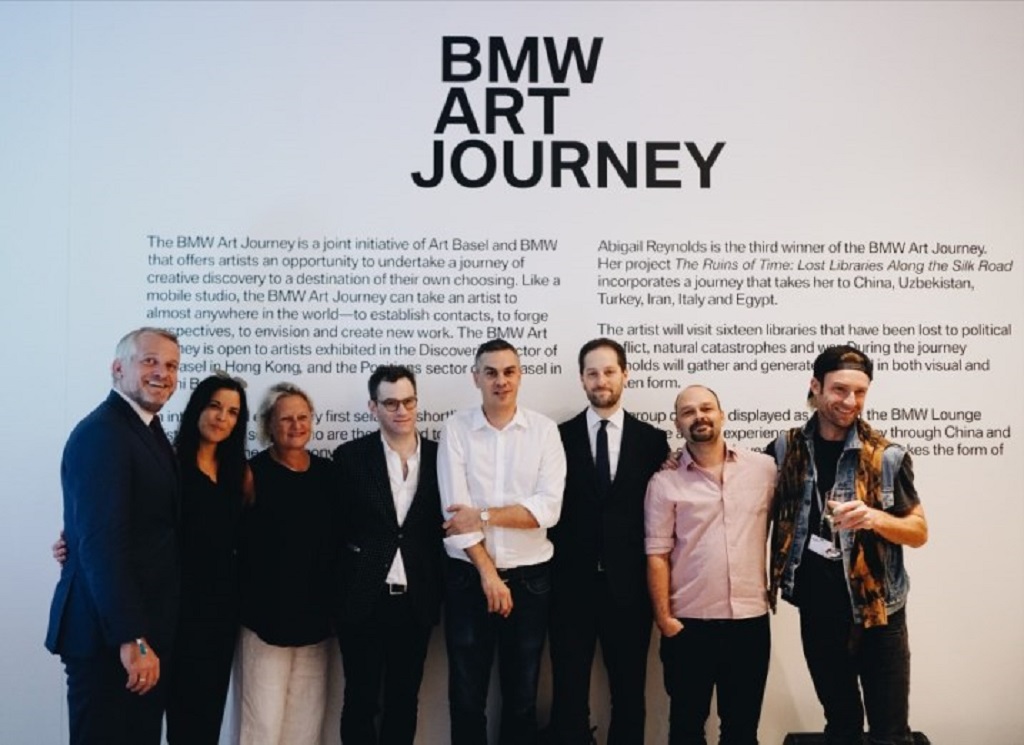 Art Basel and BMW continue their joint initiative to recognize and support emerging artists worldwide with the announcement of the shortlist for the BMW Art Journey on December 1, 2016, during this year’s Art Basel in Miami Beach. Like a mobile studio, the BMW Art Journey can take artists almost anywhere in the world to develop new ideas and envision new creative projects.

Max Hooper Schneider (b. 1982) lives and works in Los Angeles. He studied biology and architectural landscape at Harvard University and his work is the result of what can be described as ‘recalcitrant experimentation’. In his practice, he specifically pays attention to the evolving relationship between philosophy and nature. At this year’s Art Basel in Miami Beach, Schneider is presenting an installation consisting of a group of works functioning as a classification of objects. Schneider´s solo exhibitions include Kayne Griffin Corcoran, Los Angeles and Federico Vavassori, Milan. He has exhibited in recent group shows at Art Foundation, London and Galeria Nicodim, Bucharest.

Maggie Lee (b. 1987) lives and works in Brooklyn, New York. The Taiwanese American artist received her Bachelor of Fine Arts in Printmaking at the Pratt Institute in 2009. At Art Basel in Miami Beach, the multimedia artist is presenting an immersive installation of new works in various formats, conceived as a teenage girl’s bedroom, where each of the objects are individual works including a television, hanging sculptures and wall works that combine collaged elements and create a multi-layered experience. Lee’s solo exhibitions include 356 Mission, Los Angeles, Real Fine Arts, New York and Ladybug House, San Francisco. Recent group shows include the Whitney Museum, New York and SCHLOSS in Oslo.

Beto Shwafaty (b. 1977) lives and works in Brazil. In 2015 he received the FOCO Bradesco/ArtRio Award as well as the ICCo/SP-Arte Award. He develops a research-based practice on spaces, histories and visualities. Shwafaty’s exhibition at Art Basel in Miami Beach contains an installation of video, sculpture, objects and printed matter to compose a display that evokes aspects linked to the management of land, population, political imagery and aesthetics. His solo exhibitions include City Museum of São Paulo, Parc, Lima and Lampione, Frankfurt am Main.

The nominated artists are now invited to develop and hand in their journey proposals. The winner will be announced in early 2017.

“The jury was very excited about this year’s quality of presentations in the Positions sector. The diversity – both geographical and conceptual – of the participating artists and galleries ‎allowed for a singular and energizing overview of emerging art today. As always when faced with such great artists, the choice was quite difficult, but the jury unanimously agreed on these three artists,” states the jury.

In collaboration with the winning artist, the journey will be documented and shared with the public through publications, online and social media.

During this year’s show in Miami Beach, Abigail Reynolds, latest winner of the BMW Art Journey, presents first works she has created from her travels. On display in the BMW Lounge are photographs documenting the first leg of her journey exploring lost libraries along the Silk Road.

The latest edition in the BMW Art Journey book series, ‘For whom the Bell Tolls’ is also presented at the fair. The book gives insights about Samson Young’s BMW Art Journey and contains the artist’s travel diary with personal reflections and descriptions of the locations he visited in twelve countries on five continents. Included in the volume is a suite of sound sketches evoking the acoustic landscape of the bells, along with a brochure for a multimedia walk Young staged during Art Basel’s show in Hong Kong in 2016.

Launched in 2015, the BMW Art Journey is a global collaboration between Art Basel and BMW, which has been created to recognize and support emerging artists worldwide. The prize is open to artists who are showing in Discoveries and Positions in the Hong Kong and Miami Beach show respectively. Two judging expert panels, comprised of internationally renowned experts, shortlist three artists, who are then invited to submit proposals for a journey aimed to further develop their ideas and artistic work. The next judging of the BMW Art Journey will be held during Art Basel in Hong Kong, where three artists from the Discoveries sector will be shortlisted next March. The winner will be announced in spring 2017. For further information on the BMW Art Journey please visit: bmw-art-journey.com.

BMW has supported Art Basel’s shows in Basel, Miami Beach and Hong Kong as a long-term partner for many years.

Founded in 1970 by gallerists from Basel, Art Basel today stages the world’s premier art shows for Modern and contemporary art, sited in Basel, Miami Beach, and Hong Kong. Defined by its host city and region, each show is unique, as reflected in its participating galleries, the artworks presented, and the parallel programming produced in collaboration with local institutions for each edition.

In recent years, Art Basel’s art-world engagement has expanded beyond art fairs. In 2014, Art Basel launched its Crowdfunding Initiative, in collaboration with Kickstarter, which has helped catalyze much-needed support for outstanding non-commercial art projects, resulting in pledges over $1 million to creative projects from all over the world. For Art Basel Cities, launched in 2016, Art Basel will work with selected partner cities to develop vibrant and content-driven programs specific to the individual city. Connecting them to the global art world through Art Basel’s expertise and network, Art Basel Cities supports its partner cities in developing their unique cultural landscape. The first city Art Basel is partnering with for Art Basel Cities is Buenos Aires. For further information please visit artbasel.com.

For almost 50 years now, the BMW Group has initiated and engaged in over 100 cultural cooperations worldwide. The company places the main focus of its long-term commitment on contemporary and modern art, classical music and jazz as well as architecture and design. In 1972, three large-scale paintings were created by the artist Gerhard Richter specifically for the foyer of the BMW Group’s Munich headquarters. Since then, artists such as Andy Warhol, Jeff Koons, Daniel Barenboim, Jonas Kaufmann and architect Zaha Hadid have co-operated with BMW. Currently, female artist Cao Fei from China and American John Baldessari are creating the next two vehicles for the BMW Art Car Collection. Besides co-initiatives, such as BMW Tate Live, the BMW Art Journey and the “Opera for All” concerts in Berlin, Munich and London, the company also partners with leading museums and art fairs as well as orchestras and opera houses around the world. The BMW Group takes absolute creative freedom in all its cultural activities – as this initiative is as essential for producing groundbreaking artistic work as it is for major innovations in a successful business.