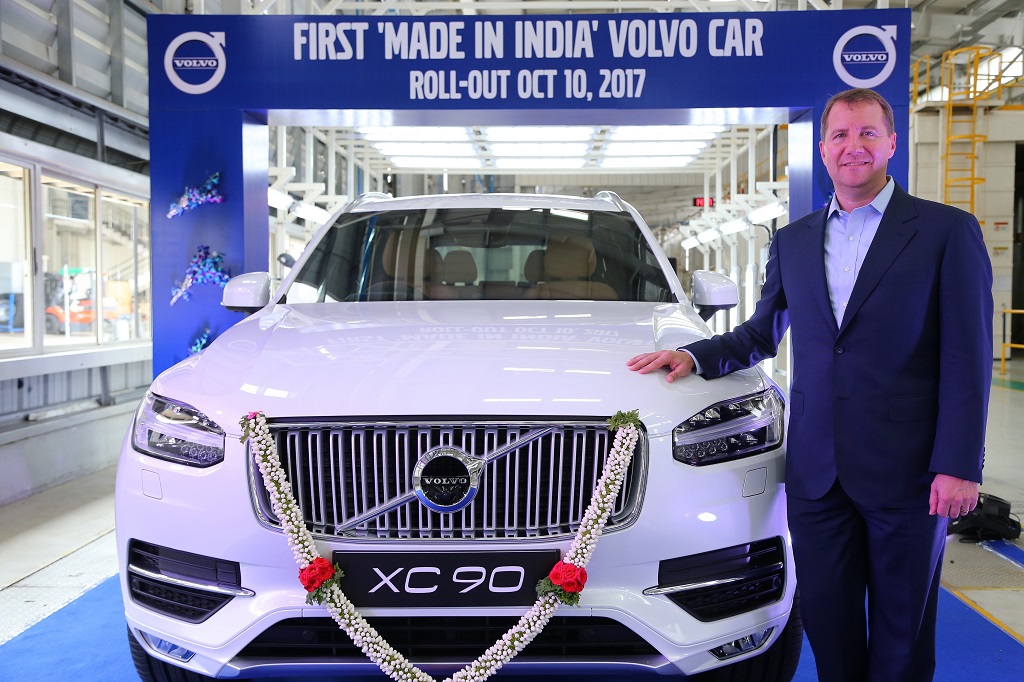 Mumbai, Tuesday, October 10, 2017- Volvo Cars, the Swedish luxury car company, keeps its promise and rolls out its first assembled car, the luxurious XC90 today from its plant in Bengaluru. Earlier this summer, Volvo announced that it would start assembly operations in India in 2017. India has shown a great long-term potential for a fast-expanding luxury segment and the decision to assemble Volvo Cars locally has provided the company a strong platform to achieve 10% segment share by the end of the decade.

The assembly operations are located near Bengaluru in southern India and focus on models based on Volvo’s SPA modular vehicle architecture. Apart from the XC90 more models on the SPA architecture are slated for local assembly and an announcement on the same will happen at a later stage.

Volvo Cars are working together with Volvo Group India – the truck, bus, construction equipment and Penta engines manufacturer – for its assembly operations and is making use of Volvo Group India’s existing infrastructure and production licenses near Bengaluru.

“It’s a moment of great pride for all of us at Volvo Cars”, said Charles Frump, the newly appointed Managing Director for Volvo Auto India. “The roll-out of first locally assembled Volvo Car speaks volumes for the company’s commitment to grow further in India. The last three years have been good for us in India and we noticed a positive and encouraging growth in terms of increased segment share, world-class product, and new dealer appointments.With global standards in quality, we are a formidable luxury car company in India and on-track to gain a bigger share of the segment.”

Volvo Cars’ decision to assemble its models locally reflects the ‘Make in India’ initiative and benefits our customers.While the Indian luxury market is still relatively small, it is forecast to grow rapidly in coming years. Volvo currently has a segment share of about 5% and aims to double this by 2020. Volvo Cars in India have had a robust 32% growth in sales volumes in the past two years and the 2017 trend is as per our plan to achieve 2000 cars, which will witness a growth of 25% year-on-year.

Volvo Cars is teaming up with footballing icon Zlatan Ibrahimović again for the European launch campaign of the V90 premium estate in advance of the European Championships football tournament. The campaign went live tonight on […]