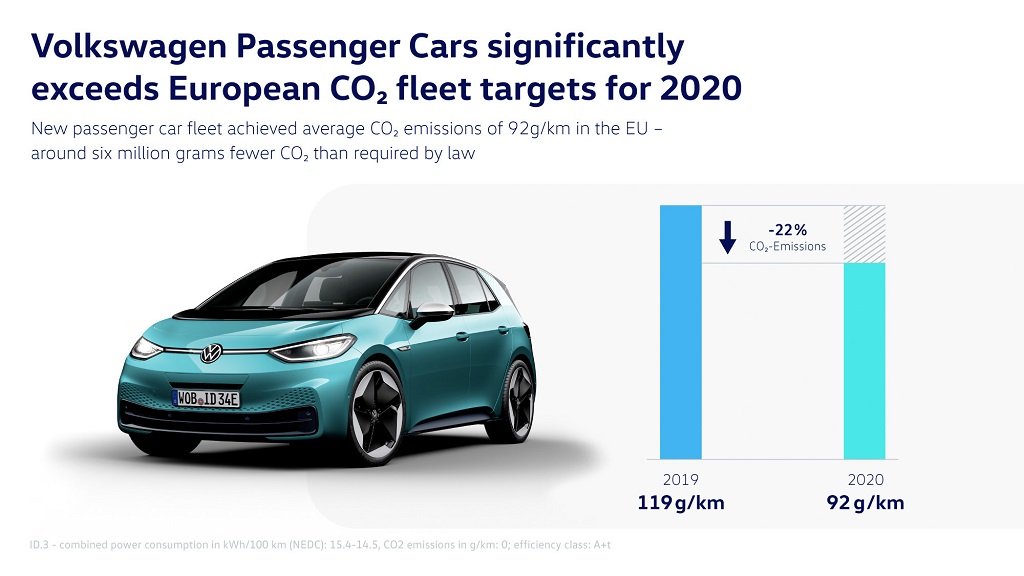 Wolfsburg – Based on preliminary figures, Volkswagen Passenger Cars has exceeded the ambitious European CO2 fleet targets for 2020 and produced around six million grams fewer CO2 than required by law. The passenger car fleet of new vehicles in the European Union achieved average CO2 emissions of 92g/km – the legal CO2 target for the brand was 97g/km. As a result, CO2 emissions fell by 22 percent compared to the previous year.

“Volkswagen continues to advance the transformation of the industry. In 2015, we kicked off the largest and most comprehensive electric offensive in the industry. By significantly exceeding our CO2 targets, we have shown that the brand is on the right track. In 2021, we will continue to accelerate the transformation towards electric mobility with new models,” said Volkswagen Passenger Cars CEO, Ralf Brandstätter.

Between 2020 and 2024, the company will invest more than eleven billion euros into electric mobility, transform further production facilities such as Emden or Chattanooga (USA) following the plants in Zwickau and Dresden and wants to bring 20 new fully electric models onto the market by 2025. “We want to develop Volkswagen into the most attractive brand for sustainable mobility. We are continuously pursuing this goal with our “Way to Zero” and will energize the brand even further in future,” Brandstätter continued. In the current fiscal year, Volkswagen will expand its offerings based on the modular electric drive matrix (MEB): This way, the fully electric models ID.41  , ID.4 GTX2  and ID.52  will gradually be launched in international markets.

With the start of the electric offensive, Volkswagen has already delivered more electric vehicles this past year than ever before – 212,000 units. At 134,000, the portion of fully electric vehicles tripled when compared to the previous year – of which 56,500 vehicles were the fully electric ID.33  model. In fact, the ID.3 was the most frequently delivered BEV in Finland, Slovenia and Norway in December – in the Netherlands this was even the case three months in a row. In Sweden, the ID.3 was actually the topselling car in December 2020 in absolute numbers – regardless of the type of drive. In the Netherlands and Germany, Volkswagen Passenger Cars also managed to leap to the number one spot in all-electric vehicles over the full-year 2020 – with a share of 23.8 percent in Germany in the BEV market and 23 percent in the Netherlands.

The final confirmation by the EU Commission on the fleet targets is to follow at a later date.

Strengthening its network in India, Volkswagen inaugurates a new dealership in Thane

→   With the inauguration of Volkswagen Thane, Volkswagen aims to increase its accessibility for customers across India →   The newly opened dealership will assist customers with Sales, Service and Spares Mumbai: Volkswagen, Europe’s leading car manufacturer is […]