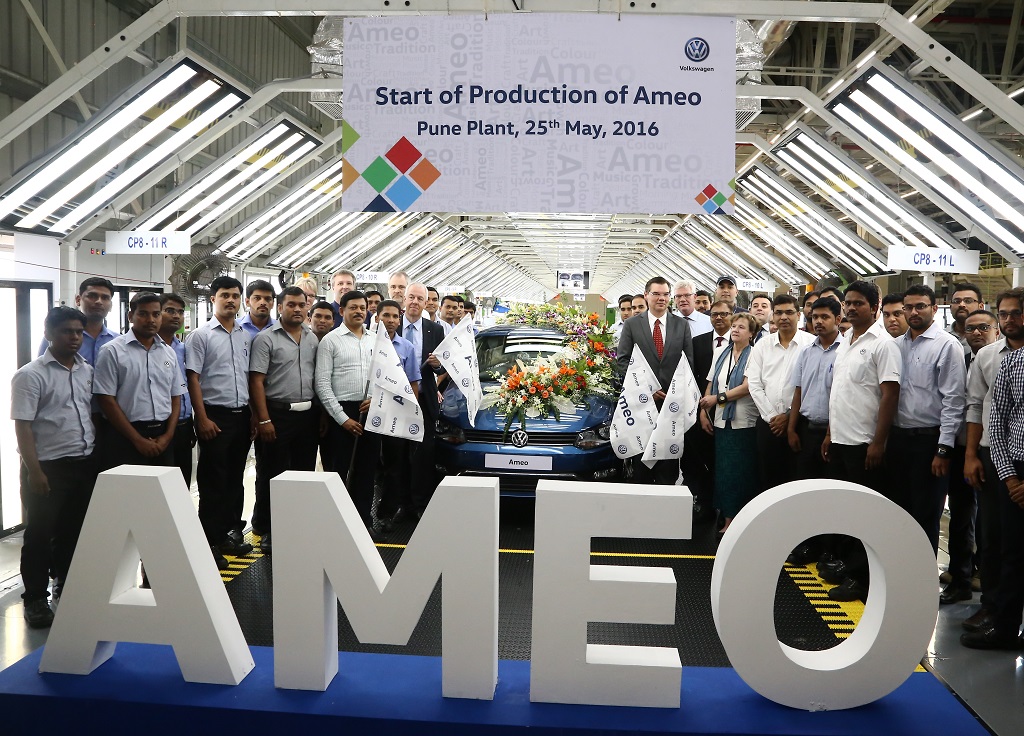 Blue Silk in colour, the first Ameo to roll-out of the plant comes with a 1.2-litre 3-cylinder MPI engine and marks yet another milestone in Volkswagen India’s growing portfolio in the country. With this addition, Volkswagen has successfully reinforced its commitment to India where it has already invested close to ₹5,720 crore (approximately €825 Million*) since its establishment in 2007.

Available in two fuel options, 1.2-litre 3-cylinder MPI and 1.5-litre 4-cylinder TDI engine, the Volkswagen Ameo is a car designed and developed specially for the Indian market. Volkswagen has focussed intensely on customer requirements while finalising the Ameo. The requirements and needs of Indian customers have been thoroughly studied and implemented in the car. With safety being one of the top priorities for Volkswagen, the Ameo comes equipped with dual front airbags and ABS as standard fitment across all variants. The Ameo also gets segment-leading features such as cruise control, rain sensing wipers and static cornering lights.

Honourable Chief Minister of Maharashtra, Shri Devendra Fadnavis, said “Volkswagen India adds yet another feather in its hat as the all new made-for-India and made-in-India Ameo is rolled out today. It is not only a matter of pride for Volkswagen but for all of Maharashtra and I would like to share my heartiest congratulations with the company. This roll-out means a lot to us as it explains to the world what ‘Make in India’ actually means.” He further added, “Be it in the area of skill development among the youth, employment generation and Jalyukt Shivar Abhiyan to make Maharashtra drought-free by 2019, Volkswagen is playing an active role in all aspects and I am thankful for this.”

Commenting on this major development, Dr. Andreas Lauermann, President and Managing Director, Volkswagen India Private Limited, said, “This day marks an important event in the journey of Volkswagen in India. The Ameo symbolizes yet another first as it has specifically been created for the Indian customers.” He continued, “Due to the expected high demand for the Ameo, we have recently added a third shift to support the extra production volumes at our plant. We are committed to ensuring that our customers get their Ameo as soon as possible.”

Volkswagen has invested approximately ₹720 crore (around € 85 Million*) in the development of the Ameo, setting up new equipment for its production as well as ramping up the manufacturing of this compact sedan at its Pune Plant in Chakan. The pre-launch bookings for the Ameo have been open at all Volkswagen showrooms in India for the last two weeks and the interest has been immense.

Volkswagen Pune Plant is currently manufacturing the Volkswagen Polo and Vento as well as the ŠKODA Rapid. The current Volkswagen models are manufactured for both domestic and export markets in right-hand drive as well as left-hand drive versions. The total investment by Volkswagen in India currently stands at approximately ₹5,720 crore (around €825 Million*).

Unparalleled global standards in comfort, performance and design propelling demand for made-in-India Volkswagen cars in the Latin American geography Totalling up to over 2,10,000 cars, Vento is the highest exported car from the Volkswagen stable […]

–       The Ameo has been awarded the Compact Sedan of the Year at NDTV Car and Bike Awards and Motor Vikatan Awards Volkswagen, Europe’s leading manufacturer, received 2 awards for its Made in India and […]