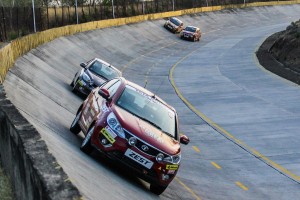 The #Geared For Great Challenge has recently set the most significant national record with Tata Motors’ new generation cars- Zest, Bolt and Tiago surpassing the 25,000 km, high-speed endurance run, an ultimate test of performance, strength, speed, efficiency and durability. Ratified by the FMSCI (Federation of Motorsports Clubs of India), a team of highly skilled and dedicated drivers, drawn from the Indian Automotive world, Indian motorsport champions and young racers are operating the petrol variants of the Zest, the Bolt along with petrol and diesel variants of the Tiago, non-stop for 24 hours. Apart from short pit stops every 2 hours for driver changes, fuel fill-ups, routine checks, and cleaning of the windshield / headlamps, the 4 cars have been racking up the kilometers at a scorching pace of 130 -140 kmph.

An individual normally covers a distance of 25,000 km in 2 to 3 years and it is almost impossible for an average Indian automotive consumer to achieve speeds beyond 130 kmph for a serious length of time. Beyond the 24 hour mark, no other car manufacturer has attempted this feat of endurance driving in India, while Tata Motors has been setting multiple time and distance records every day with its #made of great cars.