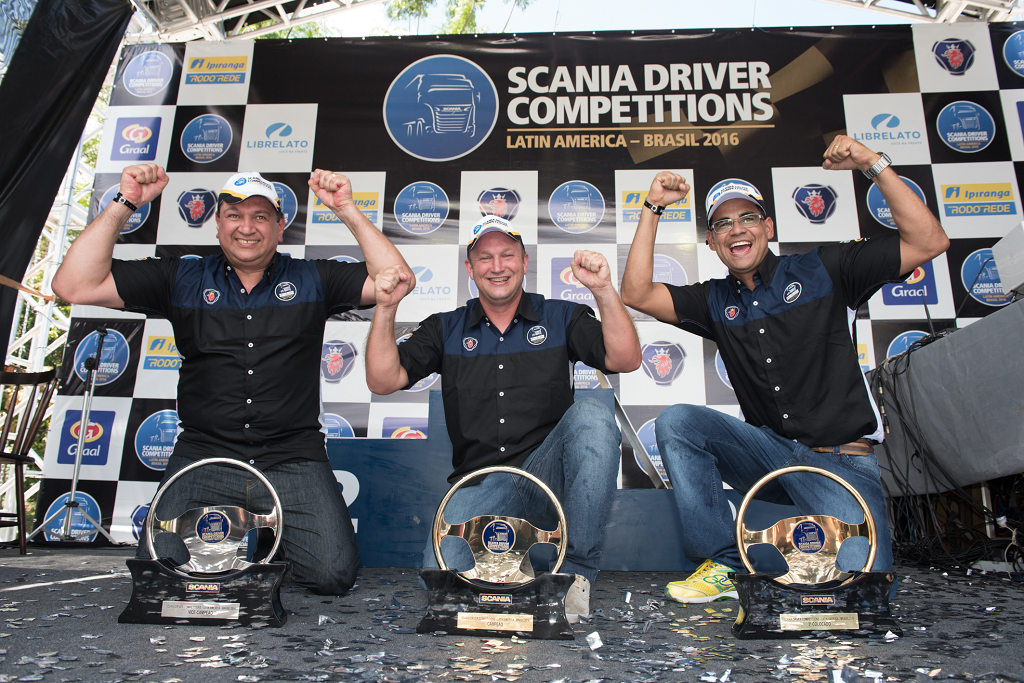 In the first Latin American Scania Driver Competitions final, the top three drivers from Argentina, Brazil, Chile and Peru will this weekend compete for the grand prize of a brand-new Scania R 440.

The top three truck drivers from each of the four countries will gather at Scania’s Latin American production centre in São Bernardo do Campo, near São Paulo, to battle against their peers for this prestigious honour and prize.

Over the past months, more than a record 56,000 drivers in total have enrolled in the competition. Following regional theoretical and practical competitions held in their respective countries, the three top drivers have qualified for the exciting final. At the final, contestants will initially be tested in theoretical knowledge as well as in practical skills such as checking the vehicle before driving, safety and rescue, and economical driving. On the second day, the overall winner will be decided after head-to-head duels on the track with the traditional Scania Driver Competition events Boardwalk, Knock the King and Super Z.

In Argentina, nearly 8,000 drivers entered the competition leading up to the final in Buenos Aires. Winner Ariel Schalbetter and his two Argentinian compatriots will meet Brazilian champion Eliardo João Lacotelli and the two runner-up drivers from the Brazilian final. The Brazilian competition this year attracted a total of 42,500 drivers. Chile’s best driver Manuel Sepulveda topped the podium in Santiago as the winner of the nationwide competition with 3,160 entrants. In Peru 2,700 drivers competed for the title with Hans Limache as the winner.

The Scania Driver Competitions have been organised since 2003 and over the years 300,000 drivers from nearly 50 countries have participated. The competition was initiated to highlight the importance of driver skills and professionalism in addition to increasing awareness of road safety and the environment. In Latin America, the Scania Driver Competitions have been held in Argentina and Brazil since 2005 with Peru a newcomer this year. More drivers have competed in Brazil than in any other country in the world with a total of 215,000 contestants since 2005.

Some of the Andean children that have received winter jackets thanks to social engagement during the Scania Driver Competitions.

The Scania Driver Competitions not only seeks to highlight the crucial role of drivers but also pursues social objectives. In the stages leading up to the final, food has been collected for delivery to food banks in Argentina, Brazil and Chile.

In Peru, Scania partnered with an organisation to provide warm jackets for poor children living in harsh winter areas. For every five enrolees in the Scania Driver Competition, a child from a needy community has received a jacket. Hans Limache, the Peruvian top driver, accompanied a Scania delegation to the Andean communities most exposed to cold temperatures to deliver the needed clothing.

One Scania truck’s epic journey to become road-ready for a special job.

Potholes can put huge strain on a vehicle’s tyres, suspension and shock absorbers, and they can sometimes cause accidents. But the holes are expensive to fix, and repairing them often involves shutting down stretches of […]