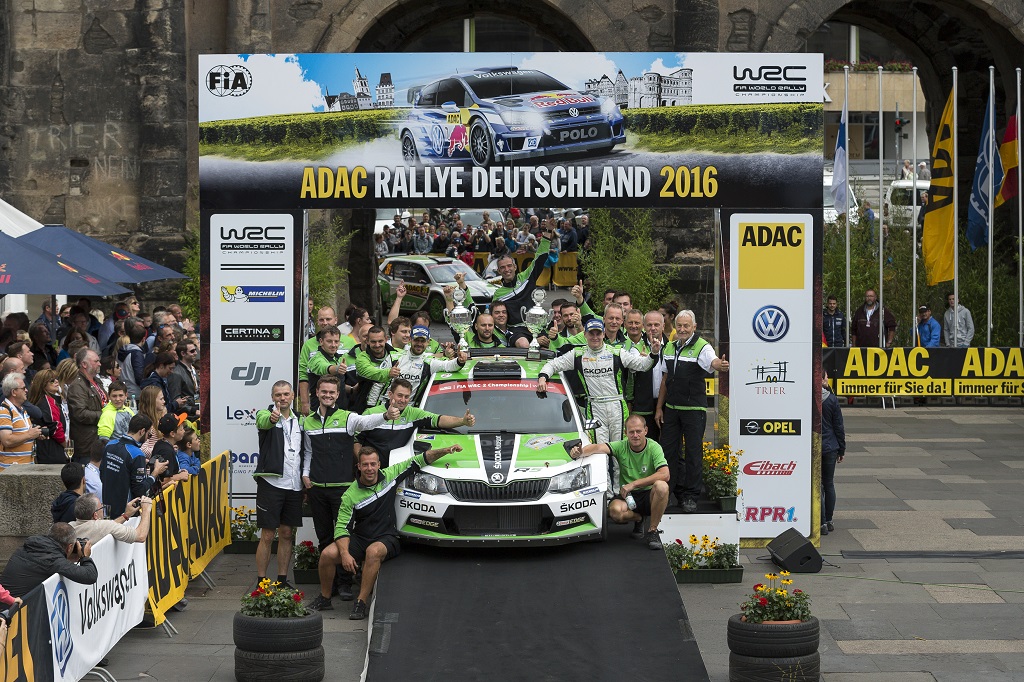 ŠKODA celebrated a commanding one-two-three-four result at the Rally Germany and thereby continued their impressive run of success in the FIA World Rally Championship (WRC 2). Just as they did three weeks ago at the Rally Finland, the ŠKODA works duo Esapekka Lappi/Janne Ferm (FIN/FIN) in the Fabia R5 brought home a commanding win in the WRC 2 category. Their team-mates at ŠKODA Motorsport, Jan Kopecký/Pavel Dresler (CZ/CZ), crossed the finish line in second place, thereby clinching the one-two result for the team from Mladá Boleslav. 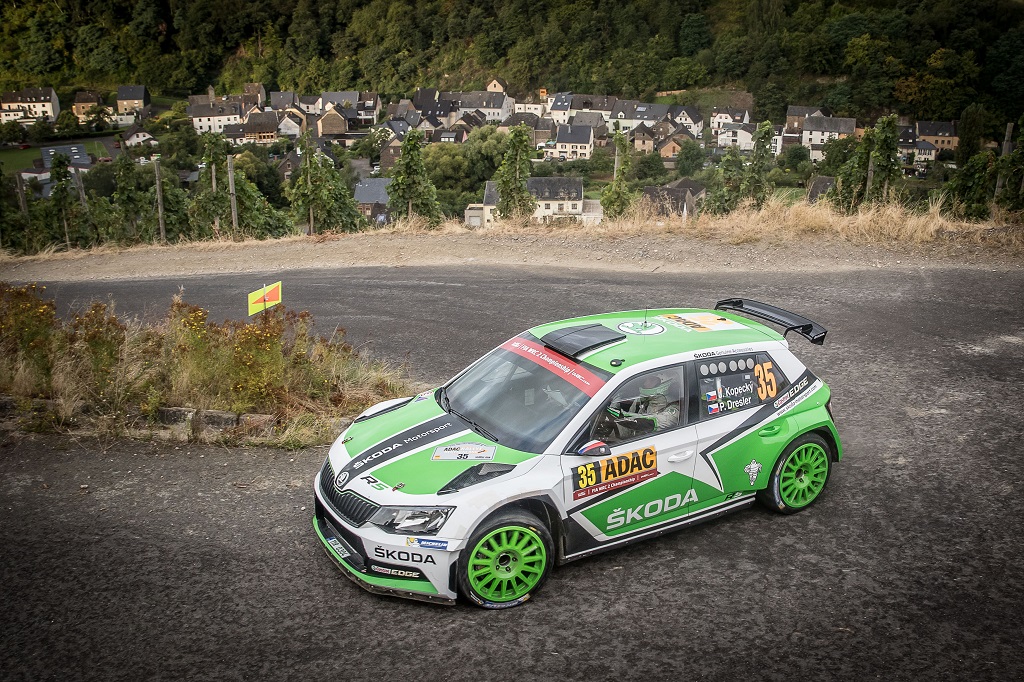 “The team really deserved this win,” said ŠKODA Motorsport Director Michal Hrabánek. “We saw a totally flawless performance from everyone: drivers, co-drivers, engineers, mechanics – every single one of them gave 100 percent once again. The conditions were not easy since the stages at the Rally Germany are some of the most challenging asphalt tracks in the entire WRC. On top of that was the changeable weather. Esapekka and Janne drove a perfect rally. No doubt Jan and Pavel would also have been up there fighting for the win if it weren’t for their unfortunate tyre damage, but made the best out of the situation finishing in second place. Four ŠKODA teams in the top four places, six overall in the top 10 clearly shows that the FABIA R5 is also the fastest rally car in its class on asphalt.” 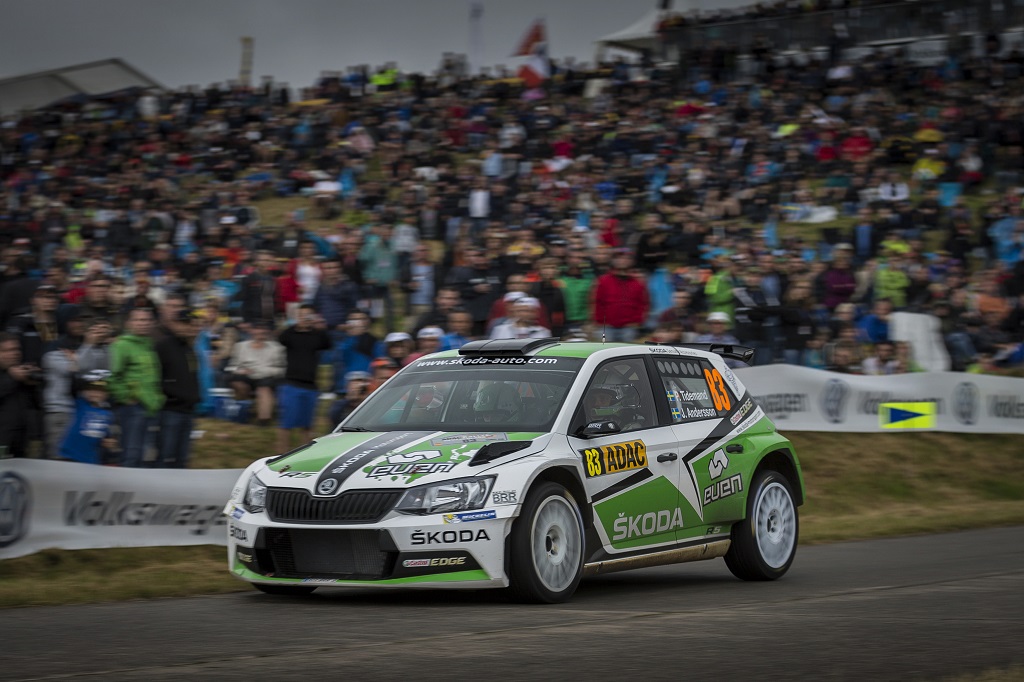 Victory in the WRC 2 class was decided on Saturday, the longest day at the Rally Germany. While the rally was characterised by twisting asphalt tracks through the Mosel vineyards around the rally centre of Trier on Friday and Sunday, Saturday was all about the legendary “Panzerplatte”. This is a section of track on the military training ground of Baumholder, which is characterised by medium-speed tracks on a mix of asphalt roads and slabs of concrete. On this stage, a clever tyre selection and a controlled offensive in changeable weather conditions saw Lappi quickly take the lead and go on to pull away from his rivals with several best times.

Team-mate Kopecký, initially slowed down by tyre damage on Friday morning, worked his way up from fifth place into second place during this phase. On the three closing special stages on Sunday, the two ŠKODA works drivers controlled the action and thereby clinched ŠKODA’s seventh successive victory in the WRC 2.

“I am over the moon,” said Lappi after his win at the Rally Germany. “To be honest, I wasn’t really expecting to be driving for the win here. But apart from a few slips on Friday morning, we made it through the stages flawlessly and quickly. Saturday in particular was perhaps the best day of my WRC 2 career on dirty asphalt to date. The FABIA R5 worked perfectly and we also made the correct tyre selection. We had a lot of grip. Thanks go to the entire team!”

Victory at the Rally Germany sees Lappi move up into third place in the WRC 2 overall standings (82 points). ŠKODA Motorsport also took the lead in the team standings (125 points). “It was the perfect team result for ŠKODA,” said second-placed Kopecký. “Of course I would have loved to repeat my victory of last year, but considering the tyre issues on Friday, we did the best we could with second place. Congratulations to Esapekka! I know how good at go karting he is, which is why I knew he could definitely win an asphalt rally.”

The ŠKODA works duo Pontus Tidemand/Jonas Andersson (S/S), who also contested the Rally Germany in the FABIA R5, but are not registered for the WRC 2 classification, were convincing in an impressive eighth place in the overall standings of the rally. “It was a great experience,” said Tidemand. “I am grateful for the opportunity that ŠKODA Motorsport gave me here. It was great practice for me to compete at a high level at this rally. I learned a great deal in terms of writing the pace notes, assessing the weather conditions and making the correct tyre selection on asphalt.”

The number for the rally: 16

The ŠKODA FABIA R5 made its mark on the 2016 Rally Germany. Between Friday and Sunday, 16 special stages were held on the demanding asphalt and concrete routes around the rally centre in Trier – and the WRC 2 class was won by a ŠKODA team on all 16 stages. Nine stage wins went to the second-placed ŠKODA works duo of Jan Kopecký/Pavel Dresler. The winners, their team-mates Esapekka Lappi/Janne Ferm, clocked the fastest time on six stages. Armin Kremer/Pirmin Winklhofer won two special stages, while the ŠKODA AUTO Deutschland duo of Fabian Kreim/Frank Christian also achieved a stage win at their home rally. Remarkably, Kopecký and Lappi shared victory on two special stages, having clocked exactly the same time, right down to a tenth of a second.

Czech champions Jan Kopecký/Pavel Dresler competing for ŠKODA Motorsport at the Rally France A total of six ŠKODA FABIA R5s at the “Rally of 10,000 Corners” on Corsica Seven consecutive ŠKODA wins in the FIA […]

ŠKODA at the Rally Germany: Confident ahead of the asphalt classic

Despite tyre damage, Jan Kopecký/Pavel Dresler go into the final 62.80 kilometres of the Rally Spain with a 14.3-second lead over team-mates Pontus Tidemand/Jonas Andersson Works driver Kopecký takes best time in seven of the […]