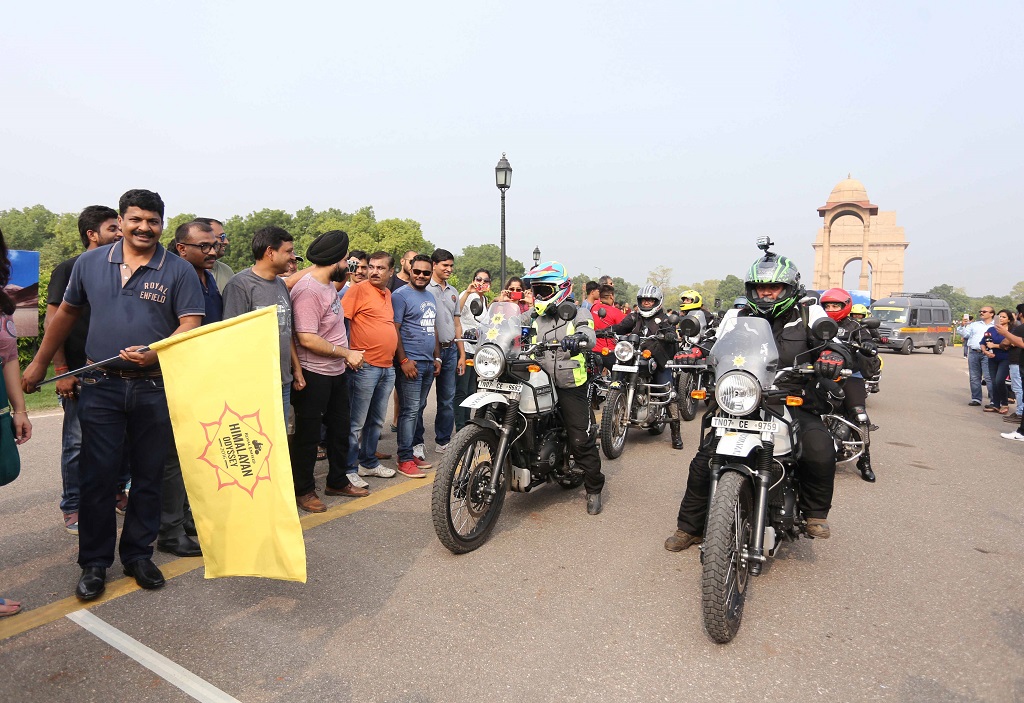 The 13th edition of Royal Enfield’s Himalayan Odyssey was flagged off today, from Delhi’s most iconic landmark- India Gate. Considered the holy grail of motorcycling, Himalayan Odyssey this year, embarks on a new journey with the debut of Himalayan Odyssey- Women (HO-W), a women’s only edition of the marquee ride. Flagged off from Delhi, the two contingents of over 100 men and women riders will ride on different routes before converging at Leh, Ladakh.

The women’s only ride, staying true to its resolve, will have an all women crew comprising of the service staff, technicians and doctors supporting and assisting the riders throughout the journey.  The participants will ride through three mountain ranges and six passes as they make their way to Khardung La, one of the highest motorable roads in the world, situated at an altitude of 18, 380 feet.

At the flag-off ceremony held at India Gate, the lamas chanted prayers and blessed the riders. The majestic procession of more than 100 thumping Royal Enfield motorcycles was flagged off by Mr. Shaji Koshy, Senior Vice President, Sales, Services and Spares, Royal Enfield.

Addressing the riders at the flag-off ceremony, Mr. Koshy said, “For over six decades, Royal Enfield has been the motorcycle of choice for all those who have wanted to ride to the mountains. The Himalayan Odyssey has championed leisure motorcycling in the way it has initiated scores of people to ride to Ladakh. With each passing year, a new set of riders are initiated into this extraordinary expedition. This year, we have introduced the Himalayan Odyssey- Women, an exclusive all women’s ride that promises to be the ultimate motorcycling adventure for all women who ride a Royal Enfield. We have received an encouraging response towards this and we hope this ride becomes an inspiration for many more women to take up motorcycling in India.”

The diverse contingent of women participants comprises of riders hailing from the major Indian metropolitan cities along with smaller towns like Tirupur, Bilaspur, Chiitinagar and Kumbakonam. The Odyssey this year, also has international participants from countries like Thailand, Indonesia, Colombia, France and UK to celebrate this ultimate motorcycling adventure.

Speaking on the adaptability of Royal Enfield Himalayan on challenging terrains as it makes its first appearance on the epic ride, Shaji commented “The Himalayan is the culmination of Royal Enfield’s 60 years of enduring history in its spiritual home—the Himalayas. Our single biggest insight in all these years of riding has been that the best motorcycle for the Himalayas is not one that tries to dominate its landscape, but one that is able to go with its flow. With its purpose-built ground-up design, the Himalayan is a simple and capable go-anywhere motorcycle that will redefine adventure touring in India.”

The 13th edition of Royal Enfield’s flagship ride will lead the riders through the most treacherous of terrains and weather conditions which will change from scorching hot to icy cold as they make their way to the picturesque regions of the Himalayas passing through Narkanda, Sarchu, Jispa and Leh, all over the course of a gruelling and challenging 15 days. Royal Enfield has been organising the Himalayan Odyssey since 2003 amongst other national and international rides with the purpose bringing together motorcycling enthusiasts and enriching their experience of riding a Royal Enfield.