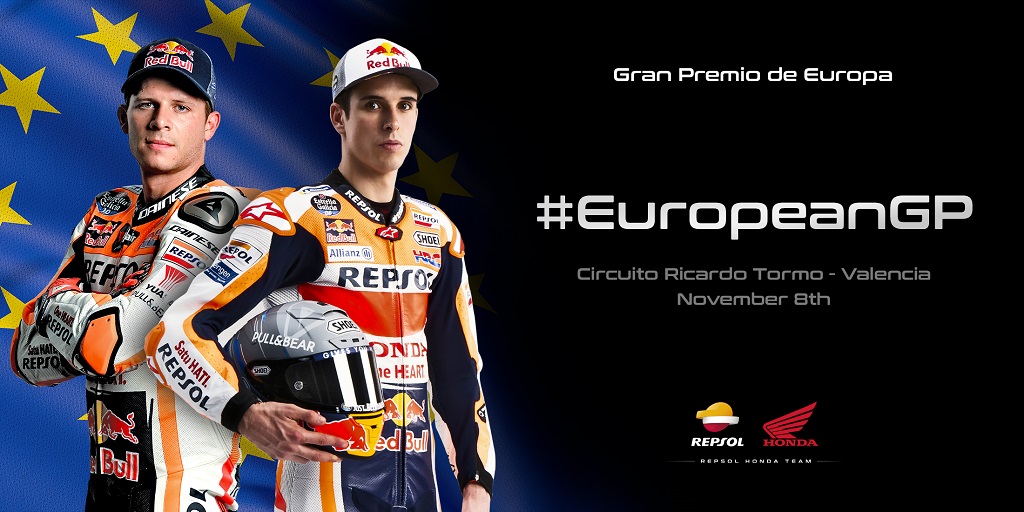 ‎Tormo, November 04, 2020: The end of the unpredictable 2020 MotoGP World Championship is within sight, just three races left before the season comes to a close.

With the final week of rest behind them, the Repsol Honda Team arrive in Valencia to begin the last triple-header of 2020. The Gran Premio de Europa at the Circuit Ricardo Tormo starts the final run of the year with a number of titles and final glories still to play for. The 4.0-kilometre track is well known to the MotoGP championship, traditionally hosting the last race of the season. In 2019, Marc Marquez won the race from the front row of the grid for his 12th victory of the season.

Having shown more incredible pace and potential in Aragon, Alex Marquez arrives in Valencia looking to do it all again. Despite suffering his first DNF of the year, Alex has not been deterred and returns to the circuit with the same ambitions as always. The MotoGP rookie has been a standout in recent rounds and enters the closing stages of the year on equal points with Brad Binder as they contest the Rookie of the Year title. Alex got his first taste of the Honda RC213V at the post-season Valencia test in 2019 with the rest of the field and is eager to see his progress since.

Stefan Bradl will again return to ride with the Repsol Honda Team at the European GP after making a step at the Teruel GP. The Valencia circuit holds fond memories for Bradl who took the 2011 Moto2 World Championship title at the Spanish venue. His last MotoGP appearance in 2018, riding the LCR Honda, saw Bradl finish a solid ninth in the race.

“It has been good to have one final week to train and prepare for what will be an intense and demanding end to the season. We approach it in the same way as all the previous races; looking to improve and show our potential. I rode there already in the test but since then I have changed a lot so I am looking forward to seeing my growth as a MotoGP rider. Let’s finish the season well and keep improving. “

“I am very pleased that the Repsol Honda Team have continued to put their faith in me and return to ride the RC213V again. We have done some testing at Valencia in the past and in Aragon we made a good step with the bike, I think we can have a good weekend here and again battle with riders further ahead as we did in Aragon and Le Mans as well. Always at around this time of the year in Valencia the temperature, especially in the morning, can be critical so we will have to pay attention to this.”

Repsol Honda Team aiming to keep the momentum in Montmeló

MotoGP 2020 Round 9, Gran Premi de Catalunya ‎Spain, September 22, 2020: With the best result of his rookie season to date, Alex Marquez is aiming to carry the momentum home as Stefan Bradl rejoins him […]