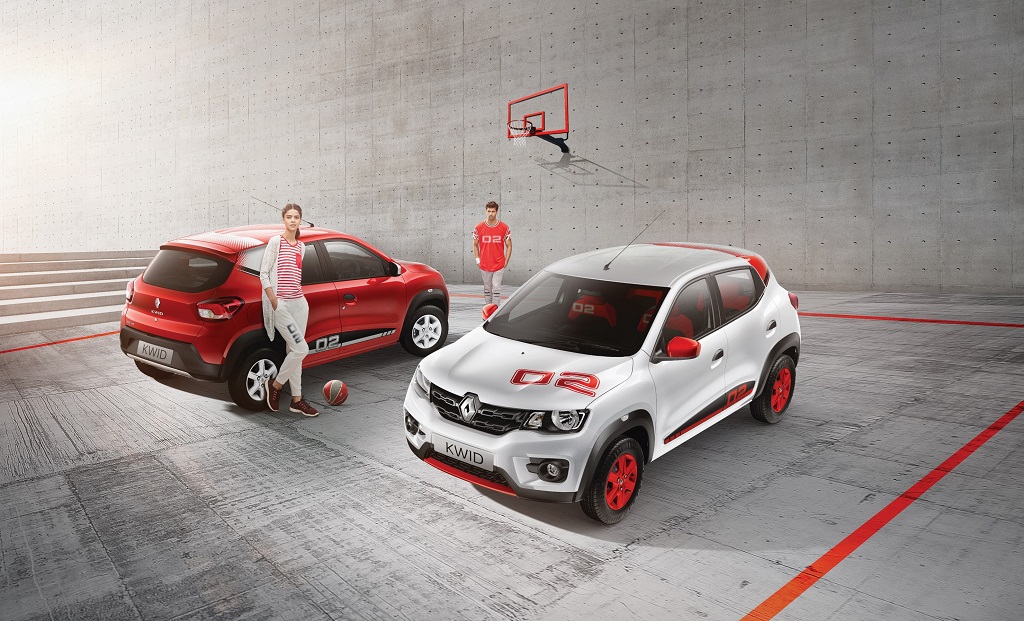 Celebrates the second anniversary of KWID’s journey in India with more than    1.75 Lakh happy customers

New Delhi, Aug 25, 2017: Renault, one of the fastest growing automotive brands in India, launched the Renault KWID 02 Anniversary Edition today, to celebrate the second successful anniversary of the Attractive, Innovative and Affordable Renault KWID. The sporty second anniversary edition portrays KWID’s unique and urbane elements, which further enhances the lifestyle quotient of the Renault KWID. It will be available in Kwid’s two largest-selling colours, red and white.

With chic new exterior design elements, adorned by red with white accents, and white with red accents the Renault KWID 02 Anniversary Edition offers a sleek profile that further expresses the vehicle’s sportier side. The new SportLine graphics with 02 Insignia and the Angular 02 Insignia on the hood, distinctively indicates the exclusivity of the 2nd Anniversary Edition. In addition, unique and stylish cosmetic upgrades like the C-Pillar and roof SportLine graphics, two-tone ORVMs, painted SportLine style wheels and front and rear skid plates, instantly boost KWID’s exclusive appearance.

Complementing the dynamic and sporty exterior, the interior of the KWID Anniversary edition is further enhanced by appealing design elements like the new seat upholstery with contrast 02, ivory contours on the centre fascia and on the AC vents and a dual tone gear knob.  Additionally, the new SportLine seat upholstery, floor mats with 02 insignia, and the sporty steering with 02 Insignia culminate to add flair to the vehicle’s interior. The vehicle’s interior has been embellished consciously with design elements in order to accentuate the vehicle’s sporty exterior.

The Renault KWID 02 Anniversary Edition will add greater diversity to the KWID range, taking forward the positioning of KWID as a car that enables customers’ to ‘Live For More’. The 1.0 litre Smart Control Efficiency engine (SCe) which powers the 1.0L SCe range is optimally designed for better performance. The 4 valves per cylinder of the Double Over Head Camshaft (DOHC) layout ensures low pressure drop and super- efficient valve lift for a higher air filling; thus allowing the engine to make usable power at low end, mid-range and high-end rev bands. This high technology engine offers excellent drivability, be it slick city streets or on the highway. The 0.8 litre SCe range is powered by a 54bhp, 799cc, three-cylinder engine, paired to a five-speed manual transmission.

To celebrate the first anniversary of KWID, Renault embarked on an iconic drive with the KWID from India to France. The vehicle traversed through 13 countries and some of the toughest terrains covering 18,996 kms before reaching Paris, proving its superiority and reliability.

KWID stands testament to Renault’s focus on getting the fundamentals right, in terms of product, design, features, technology, launch timing, value and strategy. Renault has a very strong product lifecycle plan for KWID in keeping with evolving customer preferences and will continue to raise the bar in the mini hatchback segment in India. With the KWID range comprising of the 0.8L, 1.0L MT, 1.0L AMT and CLIMBER, Renault has made its intent clear of keeping pace with global innovations and at the same time launching products to suit the local needs with a strong product lifecycle plan.

Available in two exciting body colour options – Fiery Red and Ice Cool White, bookings for the Renault KWID 02 Anniversary Edition have commenced across all Renault dealerships in India. Bookings can be made either at the dealerships or through the KWID App, which could be easily downloaded from the Google Playstore or Apple Store.

Renault India Pvt. Ltd. is a fully owned subsidiary of Renault S.A.S. France. Renault India cars are manufactured in the manufacturing facility located in Oragadam, Chennai, with a capacity of 480,000 units per annum. Currently, Renault India also has a widespread presence of more than 270 sales and 230 service facilities across the country with benchmark sales and service quality.

Renault India’s product line up and services have seen strong recognition among customers and industry experts alike, winning more than 60 titles, making Renault India one of the most awarded automotive brands in a single year in India. The Renault KWID has already bagged 31 awards, including 10 ‘Car of the Year’ Awards.

Renault India To Increase Prices By Upto 3% In January 2018

New Delhi, Dec 15, 2017: Renault, one of the fastest growing automotive brands in India, today announced that it will increase the price of its product range by upto 3% from January 1, 2018. Reasons […]

With 25 new features and a unique combination of superior performance, comfort, safety, space and unmatched fuel efficiency; Available in options of both 85PS and 110PS New Lodgy range positioned attractively, starting at INR 7.58 […]