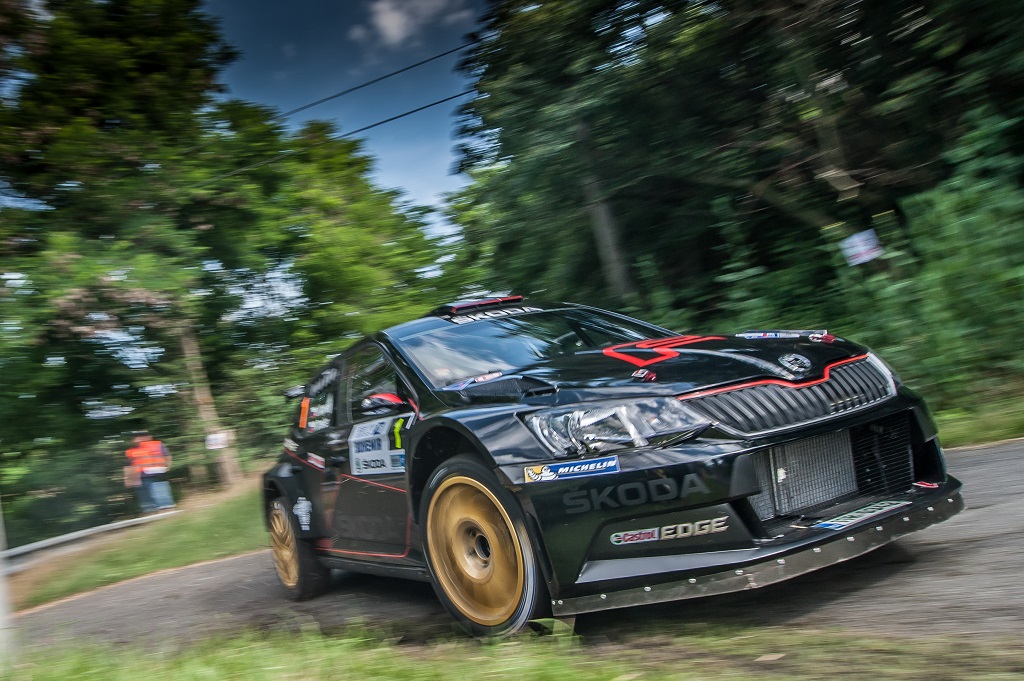 „It really has been a successful rally weekend for ŠKODA. Well done to the entire ŠKODA Motorsport team for having masterfully handled the added strain of competing in two such important rallies,“ said ŠKODA Motorsport Director Michal Hrabánek in summary. „Once again, Jan Kopecký and Pavel Dresler demonstrated that they are the epitome of reliability. The special one-off black paintwork of our ŠKODA FABIA R5 was also a great success. The thousands of fans who attended our home event were highly impressed.“

The black rally vehicle was indeed a real eye-catcher on the tracks and at the Rally Bohemia service park. The livery of the turbocharged four-wheel drive vehicle was a nod to the legendary ŠKODA 110 SUPER SPORT (Ferat), which achieved cult status in what was then Czechoslovakia thanks to the film Ferat Vampire. ŠKODA marked the 35th anniversary of the release of the horror science fiction film with the black FABIA R5, with a screening of the film, with a major exhibition at the museum and, of course, with Jan Kopecký’s spectacular rally show on the asphalt tracks lined by thousands of fans.

The experienced ŠKODA driver took the lead after the second special stage and continuously extended his lead with excellent fastest times on the asphalt tracks, which were slippery following rain. At the end of a good 150 special stage kilometres, Kopecký had a lead of 1:00.4 minutes over his arch-rival Václav Pech (CZ). It was the sixth Rally Bohemia win for Kopecký after wins in 2004, 2005, 2013, 2014 and 2015, bringing him

“A win in ŠKODA’s home event has always been especially important to us. The conditions were challenging on the slippery tracks, but we maintained control. It was great to see up close just how impressed the fans were by our black FABIA R5,” commented Kopecký. German youngster Fabian Kreim, who made his Czech Rally Championship debut with the support of ŠKODA Motorsport, likewise put in a strong performance. He was on course for a podium position on the first day, but was then set back by a flat tyre and ultimately came seventh.

The ŠKODA Park was once again a big success, in spite of the poor weather. The special activities marking the anniversary of the cult film Ferat Vampire proved to be especially popular.

The number for Rally Bohemia: 8

In its 43rd year, the winner of the traditional Rally Bohemia was decided over the minimum number of special stages, eight – a format criticised by Jan Kopecký among others. The experienced driver nonetheless won five of the eight special stages in his black ŠKODA FABIA R5. Václav Pech of Porsche only held the lead after the first special stage – after which Jan Kopecký dominated his home event.

ŠKODA’s video on the news and entertainment platform BuzzFeed was clicked on one million times in the first 24 hours, with fourteen million views to date Intelligent and entertaining clip demonstrate how children who have […]