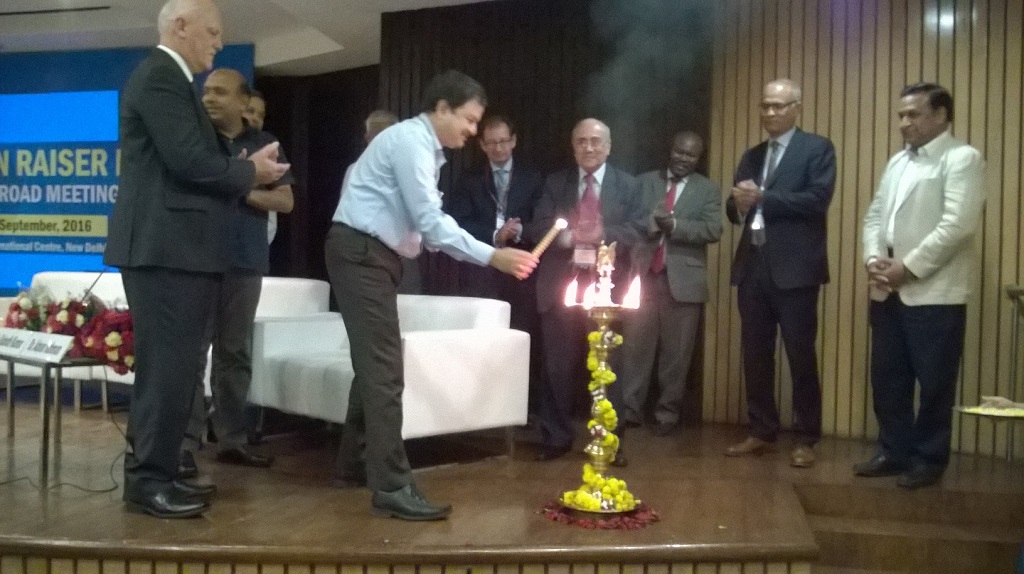 India to host World Roads Meet (Wrm) 2017 for the first time  with focus on ‘Safe Roads And Smart Mobility :The Engines Of Economic Growth’

“In view of the growing demand for road infrastructure, mobility, and the increasing importance of India as a market for road infrastructure and services, India is a befitting venue for the forthcoming  mega event. The theme of the 18th WRM is “Safe Roads and Smart Mobility : The Engines of Economic Growth.” WRM 2017 will bring together representatives of business, industry, governments, public sector organisations, mult-ilateral institutions, leaders and transport experts from the automotive, financial, road and transport infrastructure, and construction sectors;  professionals, academics, consultants, infrastructure operators, contractors and manufacturers from across the world.”  Said MR K K Kapila, Chairman , International Road Federation , the global body working for better and safer roads world wide .

“The theme chosen for WRM – 2017 addresses Safe Roads, Smart Mobility and economic growth; cherished aspirations across the world. As urbanization gathers pace, there are demands for more road capacity, there is more traffic, congestion, pollution, traffic accidents and fatalities, all of which bear negatively affect our quality of life, and place a huge burden on the economy of countries. As the world’s population continues to grow, these challenge will increase in both magnitude and complexity. The WRM – 2017 will explore safe, sustainable, and smart solutions for addressing these and future challenges.” Said Mr Kapila. 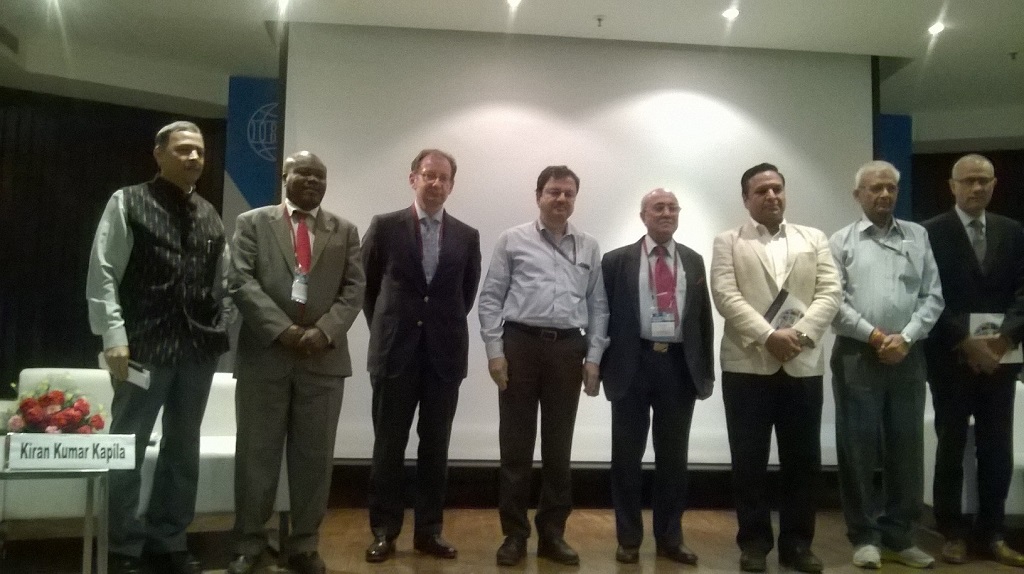 “The Ministry of Road Transport and Highways, Government of India has extended their full support to WRM – 2017.  I am confident that with the support of the Government of India the WRM will be a big success. A curtain raiser event for WRM 2017 has been organised on September 8, 2016 to discuss future plans with various stakeholders in the conference including the government to make the event a grand success . Eminent dignitaries including   Mr Amitabh Kant, CEO, NITI Aayog, Mr Raghav Chandra, Chairman, NHAI, Mr Abhay Damle, Joint Secretary, Ministry of Road Transport and Highways (MoRTH)  will be the keynote speakers on government role on Safe roads and smart Mobility. “said Mr Kapila,

Niti Aayog CEO Amitabh Kant here on Wednesday said India must aim for 9-10 per cent GDP growth for which the private sector also needs to pitch in along with government-initiated efforts.

“We must aim for 9-10 per cent GDP (gross domestic product). We need to change the country’s mindset to boost growth. Not only the government but also the private sector, led by automobile industry, needs to change its mindset,” Kant said.

He was speaking at the annual conference here of SIAM (Society of Indian Automobile Manufacturers), the apex organisation representing vehicle and vehicle engine manufacturers in the country.

Kant said the government is putting in a lot of resources to put in place the right infrastructure to boost growth.

“The total constructed roads have increased by 40 per cent while the total roads awarded have seen an increase by 52 per cent,” he added.

Modi asked the Ministry of Road Transport and Highways to boost share of private sector in road financing. Abhay Damle, Joint Secretary (Transport) Delhi, while addressing school students on road safety stated that Indian roads were the deadliest. Fatalities due to road accidents across India were the highest till date last year.

A per data received, Uttar Pradesh recorded the highest number of fatalities in road accidents. This was followed by Tamil Nadu, Maharashtra, Karnataka and Rajasthan. While larger states noted a marked increase in fatalities due to road accidents, the number declined in both Delhi and Chandigarh while Assam also saw decline in road accident related deaths compared to that experienced in 2014.

Also See – How road accidents are studied by experts?

All efforts taken by both central and state government to curb the rising incidents of road accidents have had little impact. New measures are being introduced to curb crashes and fatalities but it seems to be failing. Stronger laws, better enforcement and higher fines for breaking traffic regulations seems to be the need of the hour.

Towards A Mechanically Strong and Safe Road Infrastructure

Speaking to senior journalists during the Regional Editor’s Conference in Chennai today the Chairman, National Highway Authority of India (NHAI), Shri Raghav Chandra said that the goal of the Ministry of Road Transport and Highways is to create and maintain a countrywide network of road infrastructure that is mechanically strong, designed to ensure safety for commuters and is compatible with the requirements of efficient and sustainable development. With regard to Projects Awarded and Completed during 2014-15 and 2015-16 he gave the broad achievements mentioned below:

While informing the gathering on a major initiative like Bharatmala he said this project aims to build national highways to connect coastal and border areas including small ports, backward areas, religious places, tourist places, improve connectivity to Char Dham and connect all district headquarters to national highways.

Shri Chandra told the gathering how another major initiative , the Setu Bharatam , intends to make road travel safe by constructing Railway Over Bridges (ROB) or Railway Under Bridges (RUB) at all 208 level crossings in the country. The aim is to make national highways free of railway level crossings by 2019.  This is being done to prevent the frequent accidents and loss of lives at level crossings. They will be built at a cost of Rs. 20,800 crore .

He also informed that the Cabinet Committee on Economic Affairs approved development of 1120 kms of national highways in the States of Karnataka, Odisha, Bihar, Rajasthan and West Bengal. The work for development to two lane standards is under Phase-I of the National Highway Interconnectivity Improvement Project (NHIIP) with World Bank assistance. The estimated cost is Rs. 6461 crore.

The Chairman said the government has approved a plan for constructing 1000 km of expressways along high density corridors like the Vadodara-Mumbai corridor and Delhi-Meerut corridor. The approved expressways on high density corridors are Delhi-Meerut (66 km.), Eastern Peripheral Expressway – 135 km long Greenfield Expressway from Palwal in Haryana to Kundali via Dasna and the 135 km long Western Peripheral Expressway which is being executed by Government of Haryana.

Shri Chandra informed the gathering , the speeding up of road projects has been made possible due to several policy interventions which include the freedom to decide Mode of delivery whether PPP or EPC , Ministry is authorized to appraise projects up to Rs.1000 crores in place of earlier Rs. 500 crores ,Enhanced inter-ministerial coordination ,Exit Policy for  contractors, Revival of Languishing projects , Promoting innovative project implementation models like Hybrid Annuity Model,Amendments to the Model Concession Agreement (MCA) for BOT Projects , Segregation of Civil Cost from capital Cost for NH projects for appraisal & approval , Rationalised compensation to concessionaires for languishing NH projects in BOT mode for delays not attributable to concessionaires .

Talking about road safety the Chairman said that the government plans to reduce fatality due to road accidents by 50% by 2020. Several initiatives have been taken for this:

       The  Highway Advisory System was launched on 10th March 2016 as a pilot project on Delhi-Jaipur highway is a free-to-air information distribution system that uses radio to make the travelling experience on national highways safer.

IRF Plans Series Of High Level Roundtables On Developing Action Plan On Intellegent Transport System (Its) To Bring In ‘Smart Mobility ‘ In The Country.

The First In The Series Of Its Roundtable Being Organised On  November 10 At New Delhi  International Road Federation (IRF), a Geneva based global body working for better and safer roads world wide with an […]