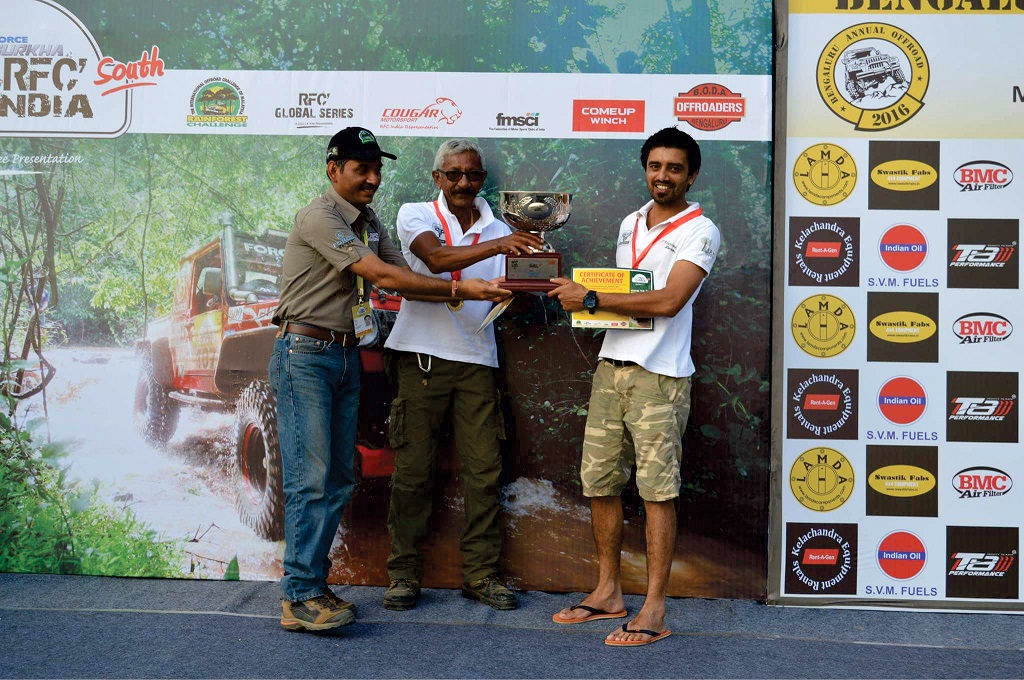 Jagat Nanjapa, a veteran rallyist and an off-roading expert who has won nine Indian National Rally Riders Championships in the past, has bagged the winner’s trophy at the inaugural Force Gurkha RFC South India. Mr. Nanjapa (co-driver Chethan), representing V5 Offroaders of Coorg, has emerged as the winner with an overall 525 points out of 600, following a rigorous competition comprising six extremely tough tasks, or Special Stages (SS), over two days. The competition had overall 11 teams competing for the trophy wherein the teams’ driving and vehicle recovery skills were tested under extreme off-road conditions.

Speaking about his experience of participating in and winning the South India Chapter of this prestigious event, Mr. Nanjapa said, “It was a superb experience. Certain obstacles that we did in a few Special Stages were completely new experiences for us. They made us push our vehicle to its limit and also made us realize that a lot of upgrade is required on our Jeep to make it ready for the Goa event. Apart from vehicle modification, I am also going to work on my physical fitness over the next few months to be completely ready for the competition ahead.”

Dr. Chaitanya Challa (Syed Taj) of Charminar Off-road Adventure Club of Hyderabad and Pradeep Kumar (Prithviraj AC) of Bangalore Offroaders Development Association (BODA) won the second and third positions with 475 and 427 points respectively. Madhusudhan Reddy of BODA was given a special award for the ‘Spirit of RFC’.

Force Gurkha RFC India was launched in 2014 by Delhi-based Cougar Motorsport Pvt. Ltd. as India’s only international off-road motorsport event and the India Chapter of the iconic Rainforest Challenge of Malaysia, which is counted among the top ten toughest motor races in the World. Following the successful completion of two editions of RFC India, the North and South Regional Chapters have been launched this year to give a boost to the off-road motorsport culture mushrooming across the country. Cougar Motorsport partnered with two of the biggest off-roading clubs of India – Bangalore Offroaders Development Association (BODA) and Gerrari Offroaders Chandigarh – wherein Force Gurkha RFC India Regional Chapters form the extreme category competitions of the annual OTRs of these clubs.

As per Cougar Motorsport’s Founder & Director Mr. Ashish Gupta, “With the overwhelming response that we have received from participants and spectators of the North and South India Chapters, our objective of taking the RFC to various regions of India was successfully achieved. We could provide an insight into the format, rules & regulations, vehicle and safety requirements of an international offroad motorsport event to more people and participants and hope that they will emulate these in their own events and activities in the future for the development of this form of motor sport.”

The track for Force Gurkha RFC South India was designed by David Metcalfe, or Mean Mr. Metcalfe as he is popularly known in the RFC circles globally, along with the Cougar Motorsport team.