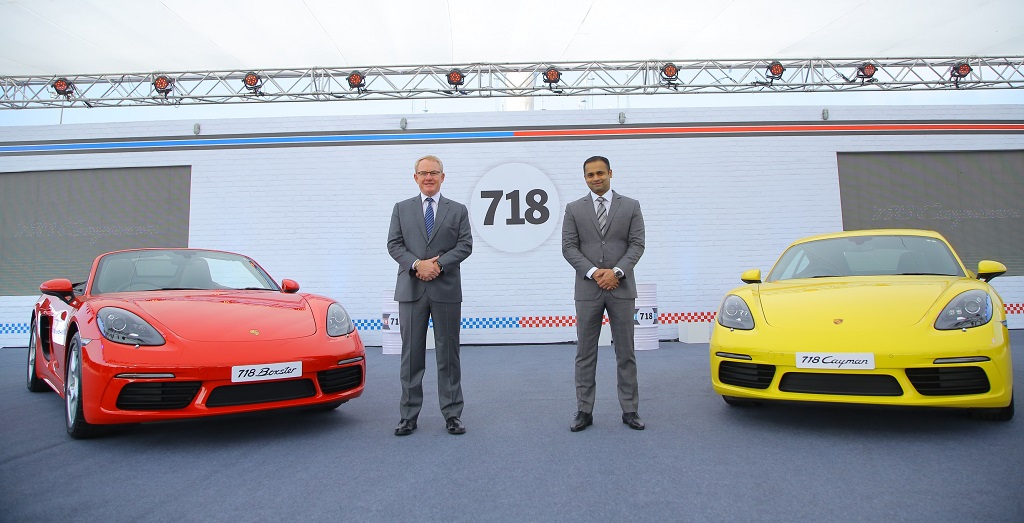 New Delhi. Merging tradition with visionary technology, Porsche’s new mid-engine sports cars, the 718 Cayman and 718 Boxster were launched by Porsche India at an exclusive event in New Delhi. Utilising a custom-built track, the two-seater sports cars delighted guests with a driving display that showcased the performance capabilities of both models.

Comprising of a coupé and roadster, the new 718 series pays homage to victorious Porsche race cars of the past, such as the 718 RSK, which took numerous race wins in the 1950s and 1960s. The mid-engine models now continue the tradition of small, powerful, turbocharged four-cylinder flat engines in combination with the latest technology innovations.

Speaking at the launch event, Pavan Shetty, Director Porsche India, commented: The re-launched Cayman and Boxster are the sportiest of all time. It is remarkable how Porsche engineers have evolved the 718 concept to produce such outstanding increases in power and torque from the newly designed four-cylinder engine, whilst managing substantial improvements in efficiency. We anticipate that the introduction of both models will be well received by our customers and enthusiasts in India, especially with the Cayman now representing the entry model into Porsche.”

Also speaking during the event, Deesch Papke, CEO of Porsche Middle East and Africa FZE, said: “The new 718 Cayman and Boxster are great examples of Porsche’s ability to produce segment leading, mid-engine sports cars. Both models offer customers an option of a sporty coupé or cabriolet and have an abundance of performance features that ensure driving pleasure.”

Technically and visually, the 718 coupé and roadster are moving closer together. For the first time, Porsche’s mid-engine models now deliver the same performance, producing 300 hp from two litres of displacement and a maximum torque of 380 Newton metres. When equipped with Porsche Doppelkupplungsgetriebe (PDK) and Sport Chrono Package, both the 718 Boxster and 718 Cayman shift from zero to 100 km/h in 4.7 seconds and have a top speed of 275 km/h.

The 718 models come with a six-speed manual transmission as standard. PDK is available as an option, which also improves fuel efficiency thanks to an auto start/stop function shutting off the engine while the car is still coasting. The four-cylinder turbo engine when combined with PDK achieves moderate fuel consumption of 6.9 l/100 km, a 13 percent improvement on the previous generation.

In action, the new 718 models are built for passionate and sporty driving, facilitated by a newly tuned chassis and stronger brakes. Closer to the road than ever before, the mid-engine vehicles handle precisely, tackling fast corners with ease.

Externally, the comprehensive rework of the coupé and roadster is evident, with just the boot lid, windscreen and roof structure preserved from the previous models. At a glance the revised front appears wider and more powerful with larger cooling intakes, Porsche bi-xenon headlights as well as integrated LED daytime running lights.

The reshaped rear body has a stronger presence especially due to the accent strip with integrated Porsche badge between the tail lights. The completely redesigned lights stand out thanks to their three-dimensional LED technology and four-point brake lights.

On the inside, the cockpit features upgraded elements such as high quality leather with stitching for greater sophistication. Meanwhile, state-of-the-art technology compliments the unique driving experience of the newly designed dash panel that includes the latest generation of Porsche Communication Management (PCM), operated by touchscreen or voice control.

In conjunction with the optional Sport Chrono Package and derived from the 911, the new 718 models feature a switch on the steering wheel for four driving modes as well as a Sport Response button for models equipped with PDK. Inspired by motorsport, pushing this button makes the response of the engine and PDK very direct for a period of 20 seconds.

When combined, the synergy of the latest developments in the 718 models deliver outstanding results that make Porsche’s latest two-seater mid-engine sports cars leaders in their respective segments. The new Porsche 718 Cayman and 718 Boxster models are now available in India. Basic retail prices ex showroom Delhi are as follows:

From 12 August to 14 August, the AvD Oldtimer Grand Prix will attract many auto fans to the Nürburgring. Porsche will be there as well and showcase not only classics but also a special edition […]