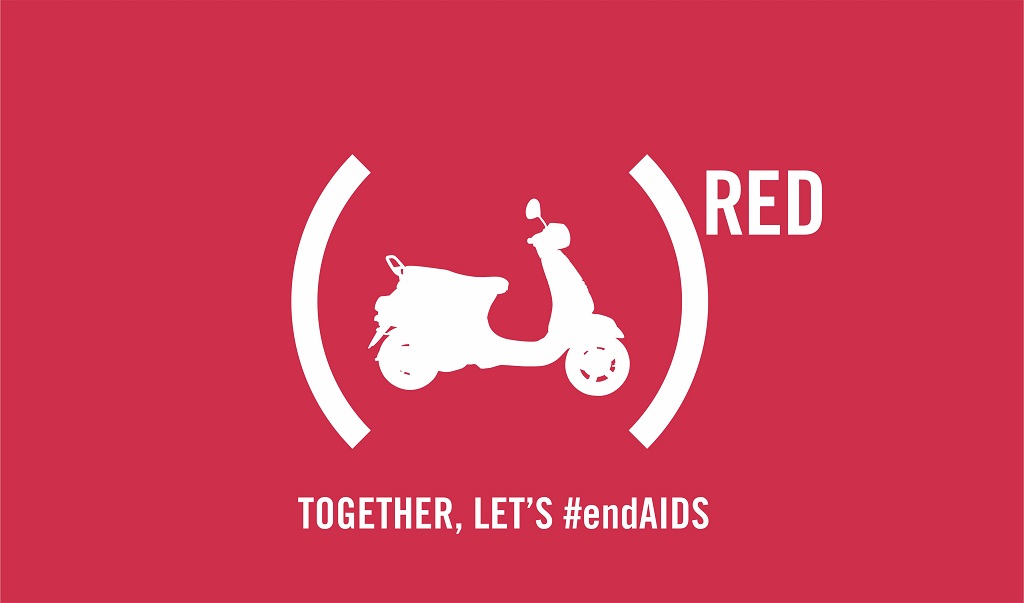 Mumbai, 29th September 2017: Piaggio and (RED) are proud to announce an expansion of the partnership with the launch of the (VESPA)RED  in India. To be launched only in the Indian Market, every sale of the(VESPA)RED  will generate money to finance Global Fund grants that support the fight to end AIDS in India.

Vespa, a model born to celebrate the beauty of a mode of transport that has achieved legendary status, was the first (RED) partner to bring an automotive product to market. The partnership was first unveiled at a Global Fund event attended by Bill Gates and Government Minsters in Rome in June 2016.

(RED) has been raising money and awareness for the fight to end AIDS since 2006, generating more than $475 million dollars to date with a focus on supporting Global Fund grants. For the first time, money raised through sales of all (VESPA)RED products in India will go to support Global Fund grants right in India – programs with a specific focus on ensuring that HIV+ women have access to the services they need to ensure their babies are born HIV FREE. Each (VESPA)RED sold can provide more than 165 days of lifesaving antiretroviral medication – medication that can help keep a pregnant mother alive and prevent her from passing the virus to her unborn baby.

Throughout its history, Vespa has been surpassing a bike’s core function as a simple and elegant vehicle and turning it into an extraordinary testament to its time, interpreting societal change and evolving accordingly. As such, funding an international project of such high social sensitivity is wholly consistent with Vespa’s values and DNA.

Vespa is proud to be paving the way in India in support of (RED)’s global fight.

Background on HIV/AIDS in India:

Despite enormous progress, there are still 2.1 million people living with HIV in India – of whom, 40% are women and 7% are children. In 2016, 80,000 people were newly infected with HIV (more than half of whom were women and teenagers), representing a 38% decline in the past decade.

(RED) was founded in 2006 to engage businesses and people in the fight against AIDS. (RED) partners with the world’s most iconic brands that contribute a percentage of profits from (RED)-branded goods and services to the Global Fund. (RED) Proud Partners include: Apple, Bank of America, Beats by Dr. Dre, Belvedere, Claro, The Coca-Cola Company, MCM, Salesforce, SAP, Starbucks and Telcel. (RED) Special Edition partners include: aden+anais, Alessi, ALEX AND ANI, Andaz, Bombas, Fatboy USA, Fully, Girl Skateboards, Le Creuset, Nickelodeon, Mophie, S’well and Vespa.To date, (RED) has generated more than $475 million for the Global Fund to fight AIDS,

To date, (RED) has generated more than $475 million for the Global Fund to fight AIDS, Tuberculosis and Malaria. 100 percent of that money goes to work on the ground – no overhead is taken. Global Fund grants that (RED) supports have impacted more than 90 million people with prevention, treatment, counseling, HIV testing and care services.

Piaggio invented the Vespa in 1946. Having successfully established itself in the world wide two wheeler segment, Vespa was launched in India in April 2012. The Company has a state-of-the-art plant in Baramati, Maharashtra, where it manufactures the iconic Vespa alongside the Aprilia SR 150 and also manufactures a range of 3 and 4 wheeled commercial vehicles at a separate manufacturing facility in Baramati.

Piaggio India to soon commence the production of its much-awaited premium scooter, the Aprilia SXR 160

The fast expansion of the dealer network to cater to distinguished customers with the new product range on cards Key Highlights: Piaggio India to start production of the first batch of Aprilia SXR 160 at […]

Aprilia SXR 160 is launched at a price of INR 1,25,997/- ex-showroom Pune The premium offering from the stable of Aprilia, can be booked at all dealerships across India and also through our website https://apriliaindia.com/ Pune, […]