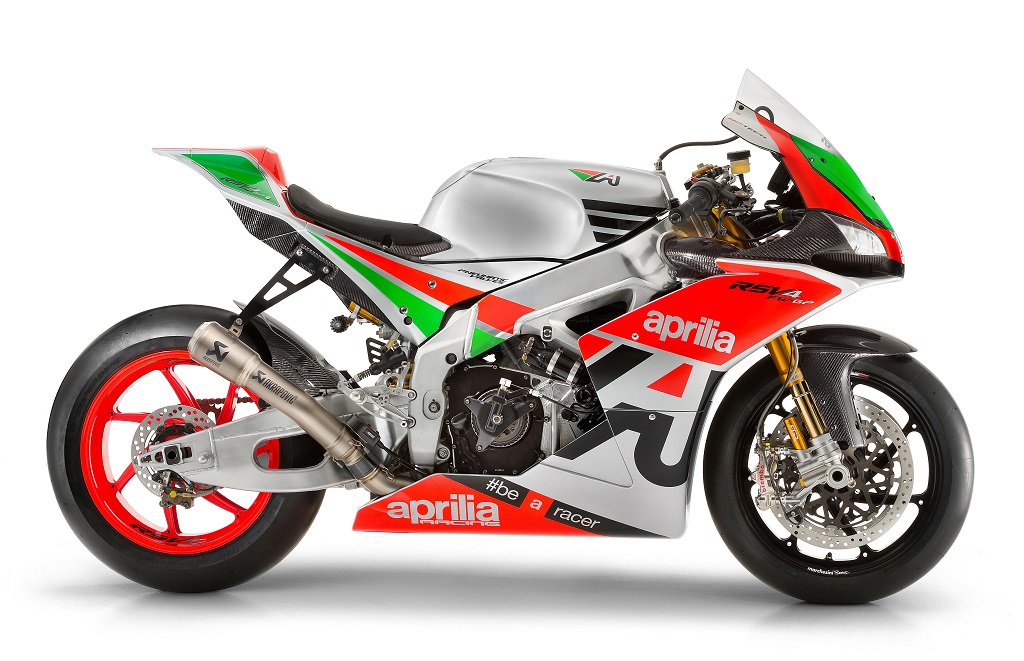 The Factory Works Project Makes A Special, High Performance Range Of Bikes Available, Created On The Extraordinary RSV4 Base, Sold And Supported Directly By Aprilia Racing, The Factory Bike That Has Won 54 World Titles. The New FW-GP Is Fully Loaded With Technology Developed In MotoGP

The history of the Aprilia RSV4 is one of the most sporting and victorious ever for a single model in the factory derivative category. From 2009 to the present, this extraordinary Italian V4 has collected seven world titles in the World Superbike championship, sealed further – in the 2015 season – by the FIM CUP Superstock 1000 Rider and Manufacturer titles. This is an extraordinary racing career that stems from the technical leadership of the factory model, reconfirmed constantly by its multiple wins in comparative tests organized by the most authoritative international motorcycle periodicals.

Aprilia Racing – the Piaggio Group’s most advanced development, innovation and experimentation platform – launched the “Factory Works” programme in 2015 to make the same technology developed for the world champion bike available to anyone who wants to compete in top level factory derivative championships or for those who simply want to have an RSV4 with optimised performance for track use. The programme includes the realization of RSV4 “Factory Works” bikes developed in compliance with the Superstock and Superbike championship regulations in the different countries, with various levels of chassis, electronics and engine modifications. In 2017, this extraordinary project will reach a new peak, introducing an even more powerful version of the RSV4, called the FW-GP, fitted with the V4 with bore taken to 81 mm and pneumatic valve timing, a configuration similar to the one that Aprilia raced officially in the 2015 MotoGP world championship. Therefore, Aprilia Racing is the first to make all the technology developed in MotoGP available, accompanied by a complete range of exclusive services, before, during and after sale, that aim not only to make this experience truly unique and unrepeatable, but also to allow the customer to take maximum advantage of the RSV4 FW-GP’s full potential.

Romano Albesiano, Aprilia Racing Technical Manager comments on the new and extraordinary initiative: “Aprilia Racing has always competed in the most selective world speed championships, like MotoGP, in order to acquire experience and to develop technologies that we can also apply to the factory product. The RSV4 is the best example of the close collaboration between the racing world and production. With the Factory Works programme, Aprilia Racing now offers something more, something truly unique – the chance to own a true racing bike. Different levels of sophistication are available: it starts with an RSV4 optimised for the track, moving on to the SSTK version (exactly like the bike that dominated the 2015 Superstock 1000 FIM Cup) all the way to a true Superbike. For 2017 we decided to push farther, making an extreme RSV4 configuration available, fitted with an engine that has pneumatic valve timing. With the FW-GP, Aprilia Racing provides its customers, not only with the technology developed in MotoGP, but also with special treatment in terms of information, support and fine-tuning of the bike before, during and after the purchase, just like the riders have who race with Aprilia Racing, in order to allow them to take maximum advantage of this exceptional bike’s full potential.”

All of the versions begin with the already exceptional technical base of the MY 17 Aprilia RSV4 RR Race Pack.

Reprogrammed instrumentation, predisposed for lap times if combined with the V4-MP system. This is the multimedia platform with which Aprilia introduces a telemetry system that provides, among other things, “corner by corner” adjustment of the RSV4’s electronic settings.

The starting point is the top of the range RSV4 R FW SBK, but the Aprilia V4 engine, derived from the unit in the RS-GP 15, has 81 mm bore and pneumatic valve timing to guarantee maximum power of more than 250 HP.

These customers will receive truly special treatment: they are invited to the Aprilia Racing headquarters in Noale to stipulate the contract, partly so that they can select the ideal configuration for their needs and budget along with our engineers. During preparation of the bike, they will receive “live” images of the outfitting progress and they have a telephone line and address available for any other needs, both of which remain active subsequently in order to receive information or request support. The bike is hand delivered by Aprilia Racing engineers with pick up, if desired, at Noale. The customers also have the right to receive Aprilia Racing branded full track leathers and a paddock pass for an entire MotoGP Grand Prix weekend, in addition to an invitation to participate in an Aprilia track day, where Aprilia Racing engineers can adjust the bike’s settings based on their riding needs and provide the best possible technical tips to take full advantage of the RSV4 FW-GP’s mechanical and electronic potential. In any case, an Aprilia Racing engineer will always be at the track, any time the customer wants to use the FW-GP. The Factory Works programme provides, included in the price of each model, technical training aimed and providing all the information required to best adapt the vehicle to the rider and circuit characteristics, as well as a test session on the track with the Aprilia Racing test team in order to ensure that the instructions are put into practice.

In the special web area www.serviceaprilia.com/public/racing , riders, collectors and teams can access the exclusive world of the Aprilia “Factory Works” racing bikes and receive further information and more technical details on the RSV4 machines prepared by Aprilia R