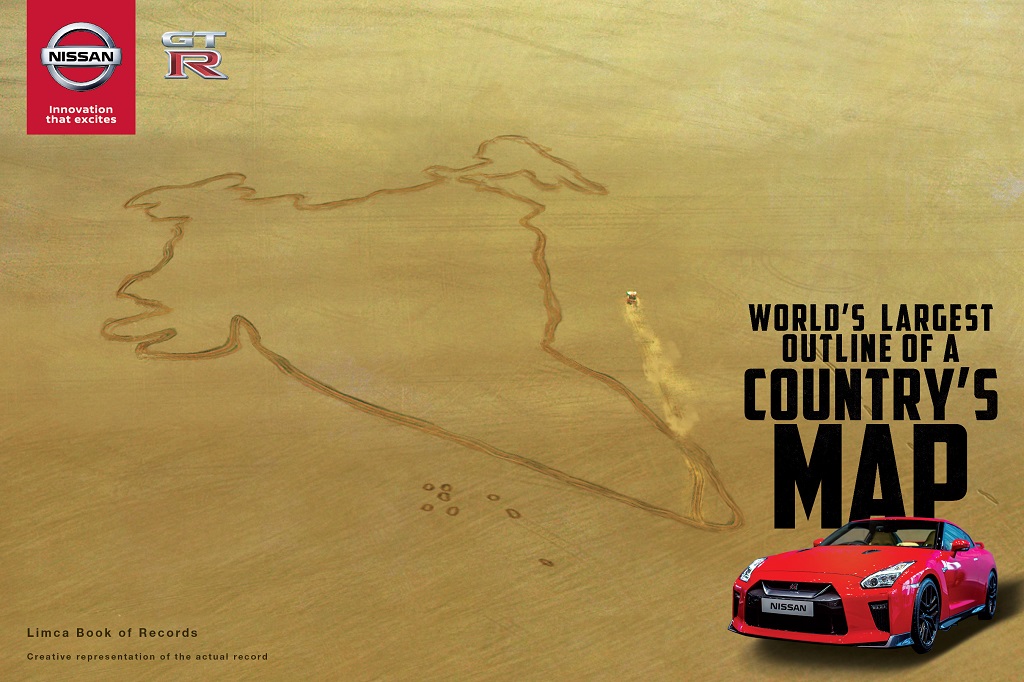 NEW DELHI, India (25 January, 2017)—Nissan Motor India is celebrating the 68th year of the Republic with a record-breaking tribute to India and its people starring the legendary Nissan GT-R sports car. The company is set to enter the Limca Book of Records for the world’s largest-ever outline of a country map. This was achieved by a  Nissan GT-R which carved out the approximate map of India spanning three sq. km. on the dry surface of Sambhar Lake in Rajasthan. This latest feat of the GT-R, captured in a video released today, salutes the Indian Republic.

Speed and precision were critical to accomplish this incredible act which marks the arrival of the iconic Nissan GT-R supercar in India. Nissan chose Sambhar Lake in Rajasthan as the location for the record attempt for its level and dry lakebed surface, stunning vistas, and soil which is soft enough to leave a deep impression to be captured by camera drones high above.

The Nissan GT-R’s precise and crisp responses enabled the car to manoeuvre through the twists and turns to trace the complex proportions of India’s landmass on the sandy surface in a dry section of the lake.

With major turns and bends along the periphery, the GT-R’s renowned driving performance, power and handling was put to its ultimate test. At the helm of the vibrant red GT-R was professional rally driver Rahul Kanthraj, who piloted the car to achieve the  record.

To ensure accuracy, the map was created by plotting the co-ordinates on a GPS device and multiple laps were done to approximate the actual map. The exciting results were captured on video with drones and onboard cameras.

The dimensions of the map were about 3km in length and 2.8km in width with a total outline periphery of 14.7km. Officials from the Limca Book of Records were on site to validate the process. Once certified, this unique record will be included in the 2018 edition of the book expected to be published in June 2018. The Limca Book of Records is a compilation of records that is published annually in India documenting human and natural world records. It is published annually in three languages: English, Hindi and Malayalam.

As a mark of respect and appreciation for India and Nissan customers on Republic Day, the company has issued a video that showcases the legendary GT-R as it sets the new  record.

To watch the full video, go to www.youtube.com/watch?v=2AqKcVgZUIA

The Nissan GT-R was launched in India in December 2016 in its Premium Edition. The first delivery of the supercar in the country was to Bollywood action star and Nissan Brand Ambassador, John Abraham. The GT-R is produced at Nissan’s world-class plant in Tochigi, Japan. India’s first official Nissan High Performance Centre (NHPC), in Noida, provides exclusive sales and service for the 2017 Nissan GT-R.

Apart from its 3.8-litre handbuilt twinturbo V6 engine producing 565HP, the 2017 Nissan GT-R comes equipped with ATTESA E-TS advanced all-wheel drive system. Instead of the traditional 50/50 torque split between front and rear axles, this electronically controlled system provides up to 100% of available torque to the rear wheels, and can send up to 50% of torque to the front wheels. This provides the steering feel and response of a rear-wheel driven vehicle, while giving the added confidence that only AWD can offer.

Nissan India expanded its successful exports programme to an additional market with the introduction of Datsun GO+ to South Africa.  Sales of the Datsun GO+, produced at the Renault-Nissan Alliance plant in Oragadam near Chennai, […]

Season 4 of ‘Happy with Nissan’ service campaign to run from Nov 19th-28th, 2015 Campaign to cover 140 locations across 120 cities Customer confidence and satisfaction a key priority  After three successful seasons and delighting […]