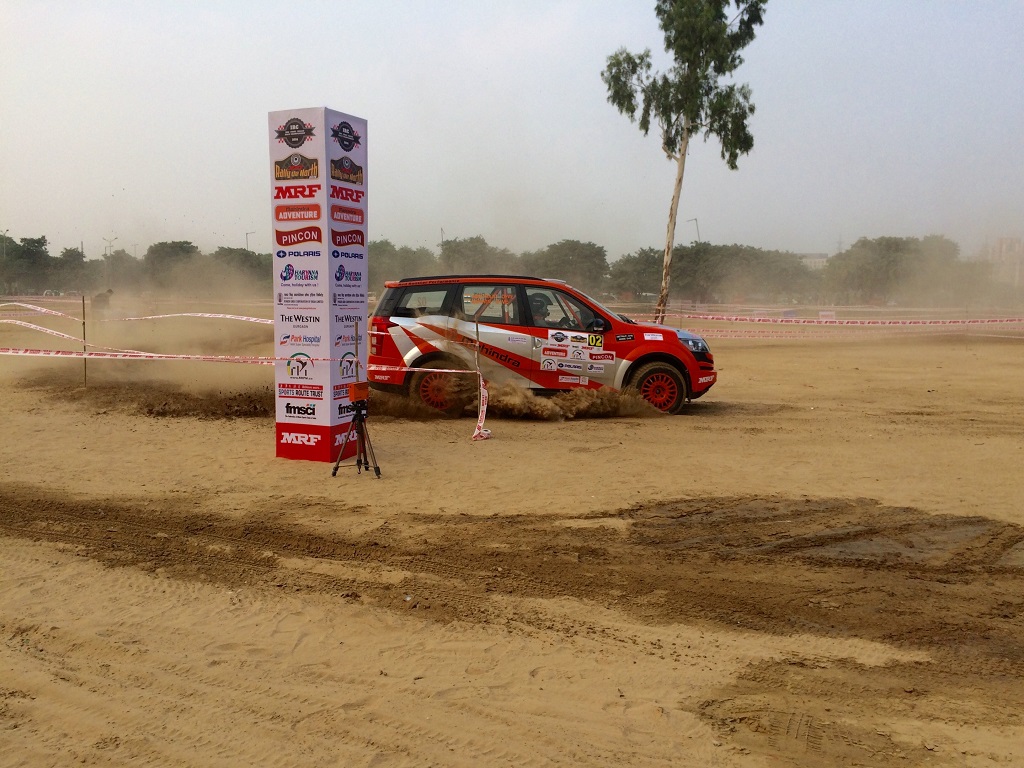 Round 3 of the MRF FMSCI Indian National Rally Championship (INRC) – the MRF Rally de North held its pre-event Press Conference at The Westin followed by the Ceremonial Flag off and Shakedown. The championship is running 5 rounds in different parts of the country (schedule given in page 2). To welcome foreign drivers and cars, a separate championship known as the MRF FMSCI Indian Rally Championship (IRC) is also being run concurrently. Indian drivers in Indian cars are eligible for the INRC while Indian or Foreign drivers in Indian or Foreign cars are eligible for the IRC.

Round 3 of the INRC and IRC, the MRF Rally de North covers around 145 kms., which includes 65 kms. of special stages (driving tracks) on dirt roads. The routes of the stages are closed sections of public/private roads which have been disclosed to competitors for reconnaissance. The 6 special stages (driving tracks) of the rally to be covered by the teams on the 18th Sep are on the outskirts of the city, while the pre-event Shakedown was held today. Shakedown, a concept introduced this year, is a procedure conducted to provide some pre-rally practice & testing to all the competitors. Top seeded drivers took dignitaries and media personnel as passengers and drove around the shakedown stage in their rally cars.

Mr. Arindam Ghosh, Director, RRPM said, “I am very happy to see the INRC come back to North India after almost a decade and hope it is here to stay. I thank MRF Tyres, Mahindra Adventure, Pincon and Polaris for their faith in us and for allowing us an opportunity to travel to new cities and venues, a trend we look forward to continuing next year as well in our goal to make the championship a pan India affair.”

Mr Sameer Burkule, the Clerk of the Course, said “Welcome back to Delhi after almost a decade. Participants from other formats like cross country rallying are getting attracted towards the MRF FMSCI INRC and IRC, which is definitely a good sign for the sport. North India is all set to see the action at the MRF Rally de North 2016.”

38 teams in the MRF Rally de North include top drivers of India like Gaurav Gill, Amittrajit Ghosh and Sunny Sidhu of Team Mahindra Adventure as well as Arjun Rao Aroor, Rahul Kanthraj, Karna Kadur and others. The INRC received 19 entries through its various classes, being a) INRC Overall – upto 3500cc cars including turbo factor and b) INRC 2000cc, and c) FMSCI Cup while the IRC, which is still at a nascent stage, received 6 entries with the Evo VIII of Abhilash P G and Evo X of Samir Thapar being the top contenders in this championship. The standalone class running only for this rally to encourage competitors in T1 and T2 vehicles, mainly Gypsies has received the remaining 13 entries.

It must be noted that the INRC and IRC are two separate championships and their results are not clubbed together or compared as they run distinctively different vehicles, most importantly, the INRC is for two wheel drive Indian vehicles only while the four wheel drive foreign vehicles are allowed in the IRC.

The prizes for the different categories are as follows:

The championship standings of all the classes in the MRF FMSCI INRC and IRC 2016 after round 2 is enclosed.

The Federation of Motor Sports Clubs of India (FMSCI), the governing body for all motorsport events in India has given the rights to promote theINRC and IRC to Ramakrishna Race Performance Management Pvt. Ltd. (RRPM), which has roped in marquee companies like MRF Tyres, Mahindra Adventure, Polaris and Pincon as key sponsors for the Indian rally season.

Ramakrishna Race Performance Management Pvt. Ltd. (RRPM) is a company formed with the sole intention of promoting “Professional Motorsports” in India and provides all kinds of technical assistance and information required to be at par with the National Level.

RRPM was started in 2003 by Mr. Arindam Ghosh, an icon in his own rights with rallying and organizational experience of over 40 years.  RRPM is proud to be a part of the Federation of Motor Sports Clubs of India, which is the apex body of India.