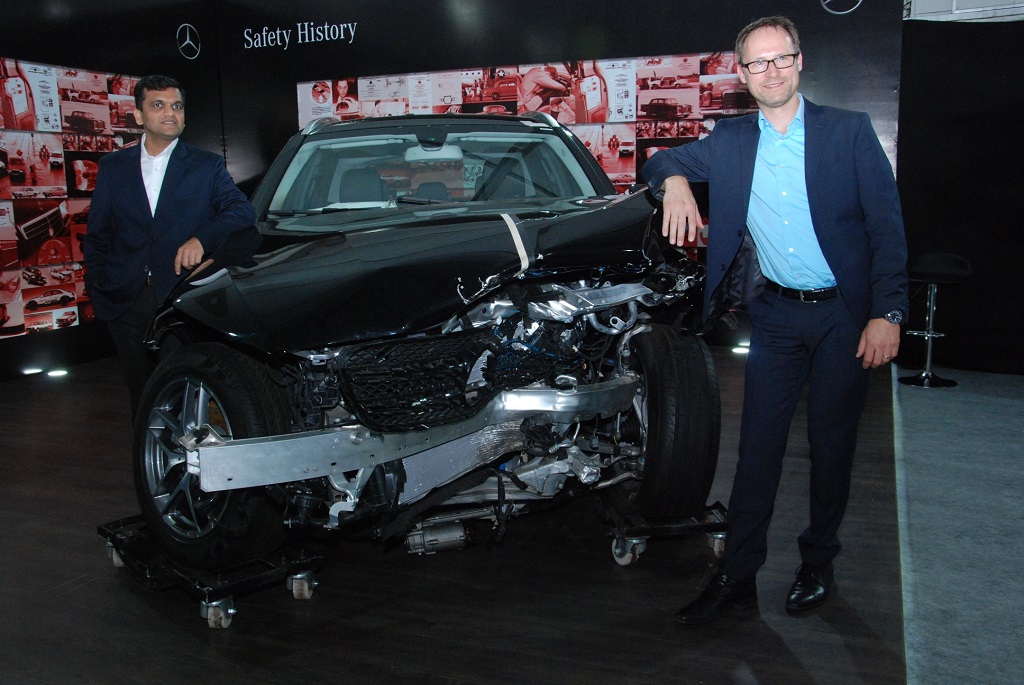 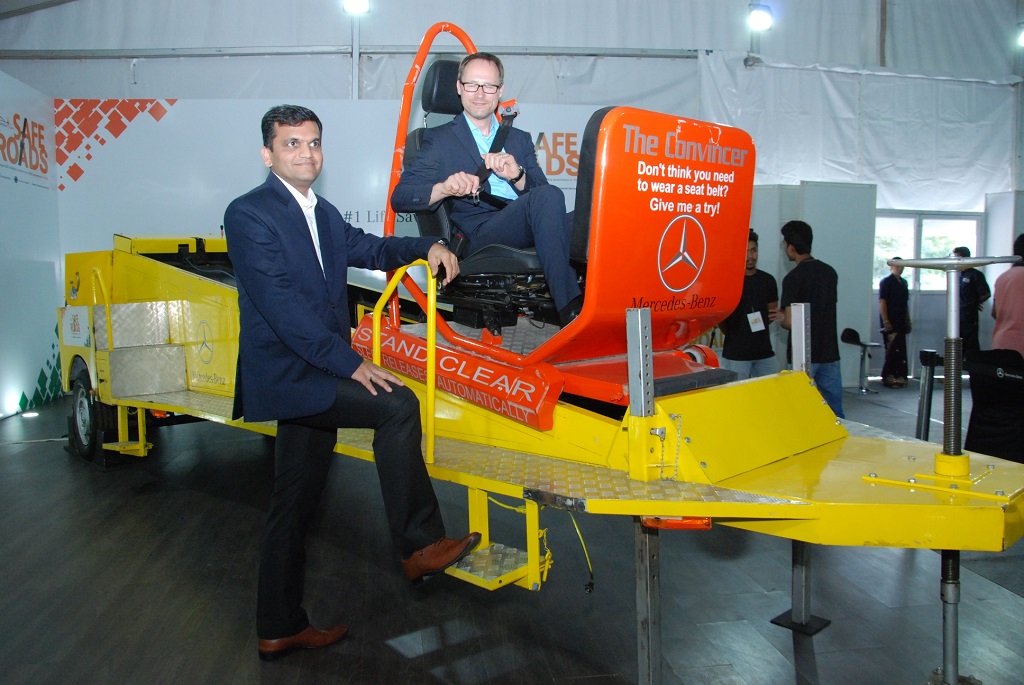 Safety is a core competency and a core value for Mercedes-Benz and its automotive brands. Mercedes-Benz in particular, is renowned worldwide for developing highly sophisticated safety systems. However, implementation of effective safety systems remains a challenge, as the road users often do not comply with traffic rules or do not use the safety systems onboard their vehicles. On Indian roads, approximately 140,000 people die every year of road accidents, largely caused due to ignorance of safety norms and rules.

‘Safe Roads’ was hence conceptualized by Mercedes-Benz, in an effort to reduce this startling fatality rate on Indian roads, by creating more awareness on road safety. Mercedes-Benz is convinced that such initiatives can begin an era of road safety awareness that supports a new culture of road safety for Indians. Over 70 per cent of the fatalities can be reduced in the next ten years through education and enforcement of safety rules and by creating awareness. 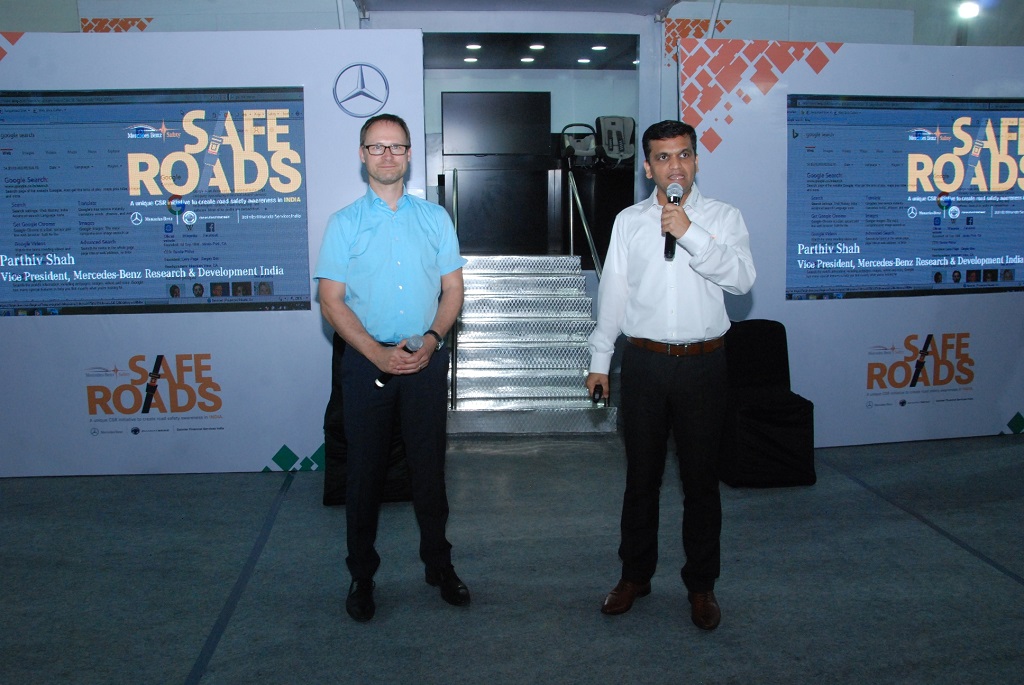 The roadshow was held at the Forum Sujana mall on 1st and 2nd October for public participation and will be at the Jawaharlal Nehru Technological University on 5th and 6th of October to orient students on road safety awareness. ‘Safe Roads’ is a road show that spreads the message of road safety through physical demonstration, visual aids and research reports. The physical demonstration will be undertaken with the use of exhibits that have been brought from Germany providing a real life experience of safety measures that can potentially save lives during road accidents:

The most popular exhibit remains the Belt-Slide which enables visitors to experience the impact of seat belts in a simulated crash environment at low speed. The aim is to increase the percentage of seat belts usage for front row passengers including driver. 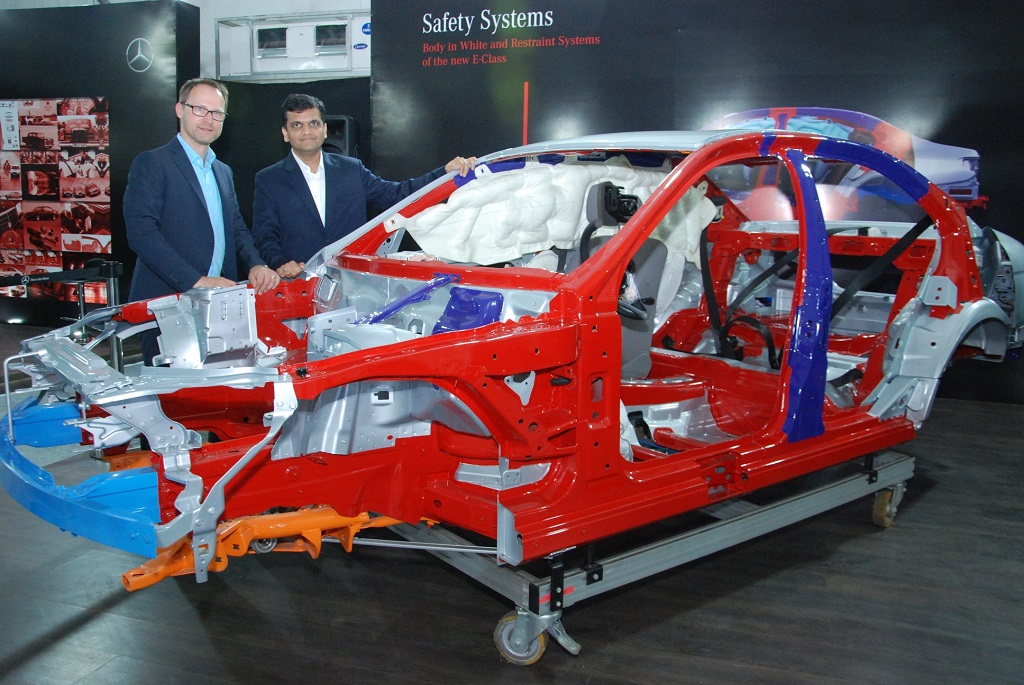 New exhibits for this year are:

The Mercedes-Benz PRE-SAFE® Seat system: Enables visitors to experience the PRE-SAFE® features of the Seat. Using a network of sensors, PRE-SAFE® system can detect certain conditions that suggest an accident is about to occur. The PRE-SAFE® seat system then pre-tensions the front seat belts, adjusts the front head restraints and passenger seat to better prepare the occupants for more effective results from the restraint systems.

An absolute highlight is the Mercedes-Benz S-Class S500. The S-class will be on display to showcase a glimpse of future of safety. The S-class illustrates trailblazing innovations in the field of active and passive safety.

From last year, we are showcasing the following important safety exhibits as well:
Airbags will also be on display (driver and passenger airbags, curtain airbags, knee bags, etc.)

A ‘Body in White’ (BiW) passenger car exhibit highlights some of the core elements of a car structure which have high tensile strength that can absorb most of the energy during a crash and minimize passenger car intrusions.
Alcohol goggles provides a unique experience: Wearing these special types of glasses simulates the common ‘walk-the-line’ activity which causes loss of balance and delayed reaction times. Visitors will feel their susceptibility to impairments and realize the potential severe consequences due to alcohol consumption.

Driver’s fault has been revealed as the single most responsible factor for road accidents, killings and injuries on all roads in the country over a long period of time. Drivers’ fault accounted for 77.1 per cent of total road accidents during 2015 as against 78.8 per cent during 2014. Within the category of drivers’ fault, road accidents caused and persons killed due to exceeding lawful speed/over speeding by drivers accounted for a share of 62.2 per cent (2,40,463 out of 3,86,481 accidents) and 61.0 per cent (64,633 out of 1,06,021 deaths) respectively.

Manu Saale, MD & CEO, Mercedes-Benz Research and Development India added: “Technology, Innovation and Research go hand-in-hand in improving vehicle safety. With the Safe Roads initiative, we have brought in a new era of safety awareness keeping the Indian road scenario in focus. Accidents and resulting fatalities can not only be greatly reduced through innovative technologies but also through responsible driver and passenger behavior. Mercedes-Benz has developed state-of-the-art safety features that have proven to be effective. In MBRDI alone, there are over 100 engineers contributing to these technologies in active and passive safety of Mercedes-Benz vehicles with 54 patents filed on automotive safety. While there are some policy and regulatory hurdles that exist in order to apply them in India, we hope that the ‘Safe Roads’ initiative will enhance the road user’s awareness of such technologies and will help persuading the legislators to ease these norms for the greater good of society.”

Following the successful event we had at Hyderabad, the Safe Roads initiative will be travelling to Kolkata soon!

After conducting ‘Luxe Drives’ in the southern, central and east markets in the first half of the year, Mercedes-Benz India has set its eyes on the industrial and financial hub of Gurgaon. The city […]

Mercedes-Benz redefines the ‘compact luxury’ segment all over again, drives in the dynamic and sporty new A-Class

A-Class launched in both petrol and diesel variants to suit customer requirements: A 180 Sport and A 200 d Sport Continuation of dramatic design elements: the new A-Class combines dynamic exteriors and impeccably detailed plush […]

Mercedes-Benz ups its luxury quotient in the Financial Capital; inaugurates a refurbished 3S luxury car destination, the largest in Mumbai