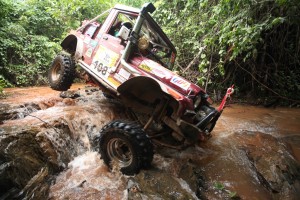 New Delhi, March 15, 2016: Cougar Motorsport Pvt. Ltd. has announced the opening of registrations for Force Gurkha RFC India 2016 which will be held in Goa from 22nd July to 29th July. The third edition of India’s toughest off-road motorsport event will witness up to 25 teams competing for the title. The event, launched in 2014, is one of the 25 worldwide editions of the iconic Rainforest Challenge of Malaysia and the top Indian driver at the India Chapter will get an automatic and free entry to the mother event to be held in Malaysia in December 2016.

Explaining the reason for limiting the participation slots for the event, the event organizer Cougar Motorsport’s Founder & Director Mr. Ashish Gupta said, “RFC India is an extremely tough competition that tests the driving and vehicle recovery skills of the contesting teams under extreme off-road conditions. As the event progresses, the challenges keep getting tougher and completing the tasks in the allocated time becomes very difficult for most of the teams due to vehicle breakdowns, topples, faulty equipment and accessories as well as the mental and physical fatigue of the competitors. Hence, we have kept an upper limit of 25 teams for the competition in order to retain the high-quality standards of the competition and yet complete the entire event within the stipulated time.”

Rainforest Challenge was launched in Malaysia in 1997 and is recognized as one of the ten toughest motor races in the world. The worldwide editions of RFC include Italy, Russia, The Balkans, Poland, Sri Lanka, Vietnam, Thailand, Tunisia, China and Australia. Force Gurkha RFC India, though merely two editions old, is already among the top three events of RFC global series.

Force Gurkha RFC India is divided into four competitive legs; The Prologue, The Predator, The Terminator and The Twilight Zone. These legs are further divided into over 20 Special Stages (SS) consisting of 100 points each. The competing teams gain points based on successful completion of a task and incur penalties for making mistakes, not starting or finishing a task as well as breaking competition rules including the environment protection rules. The team with the maximum points after the completion of all the Special Stages emerges as the winner of the competition.

Anyone who is passionate about off-road motorsport and has a relevant off-roading or motorsport experience can register for the event. Vehicles have to be modified as per RFC India guidelines. Registration fee for Indian contestants is INR 75,000 per team with each team comprising a driver and a navigator. All applications, except those of past participants of Force Gurkha RFC India, will be reviewed by the screening committee prior to acceptance. Interested off-roaders can download the application form from the RFC India website, www.rfcindia.in.