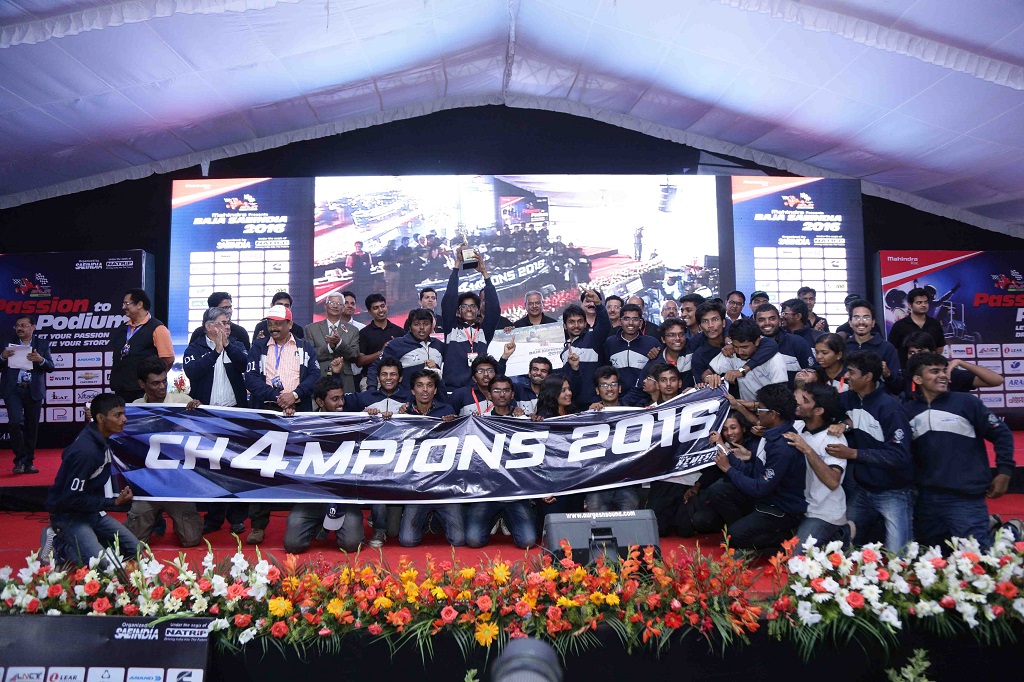 The much awaited 9th edition of the Mahindra BAJA SAEINDIA 2016 finally came to an end yesterday at Pithampur Indore, leaving behind many exhilarating moments. A total of 129 teams competed the endurance round comprising both mBAJA and eBAJA. The second edition of eBAJA saw 9 teams competing for the title on February 20, 2016. The events took place at the NATRiP facility at Pithampur near Indore. 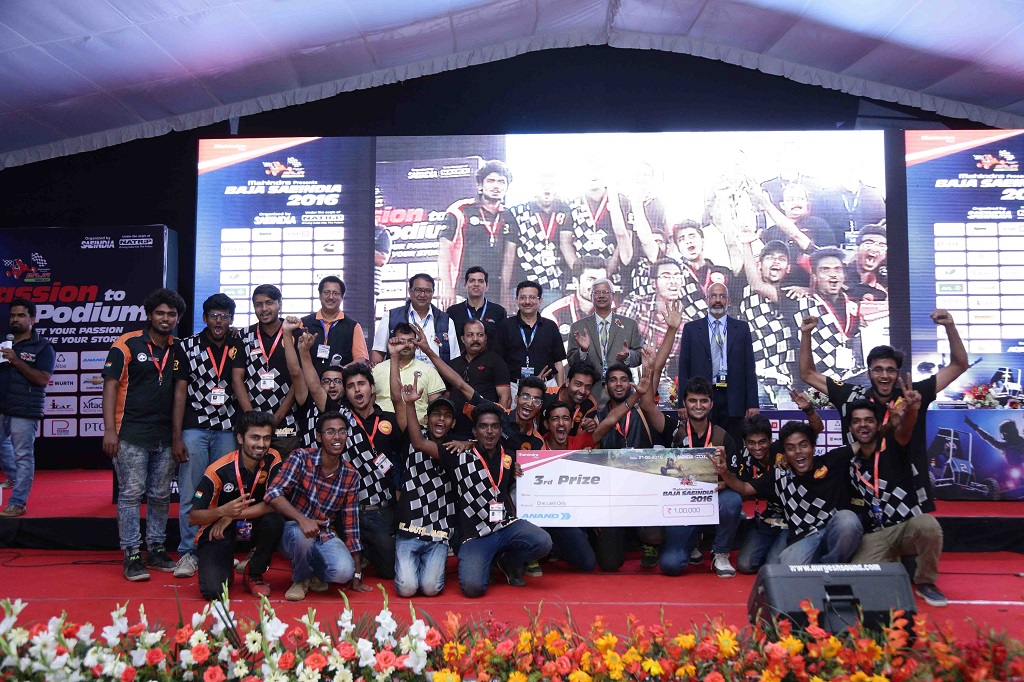 The highlight of BAJA 2016 was the new track and with natural hurdles spread over 5 kms. The track was designed in a manner to pose more challenges and test not only the success of vehicles but also of those driving that vehicle.

Smt. Kashibai Navale College of engineering, Pune was declared the winners of the ‘Best eBAJA Team’. This was the second edition of eBAJA which aims to provide a platform to leverage the onset of Electric Mobility in India. The event saw participation from 11 colleges. However, only 9 colleges competed in the endurance round.

About 395 teams had registered in the 9th year of BAJA SAEINDIA series, out of which 179 teams qualified for the finale. However, only 129 teams made it to the Endurance round. This year was remarkable with 8000 students from different parts of the country working towards BAJA SAEINDIA 2016 theme ‘Passion to Podium’ and achieving it with great success.

Speaking on the occasion, Dr. Pawan Goenka, Executive Director, Mahindra & Mahindra Ltd. said, “I look forward to personally attending BAJA every year. Witnessing thousands of students coming together to celebrate not just the spirit of BAJA but also the philosophy of Rise has given me immense pleasure. Year on year there has been an increase in participation from colleges and this is testimony to BAJA SAEINDIA’s growing popularity and its national significance. We at Mahindra have always believed in thinking beyond the conventional and this forum gives young engineering talent that opportunity to showcase their skills. Mahindra is delighted to be associated with BAJA SAEINDIA 2016 as the title sponsor and with BAJA we are taking forward the philosophy of Mahindra Rise to the next level”. 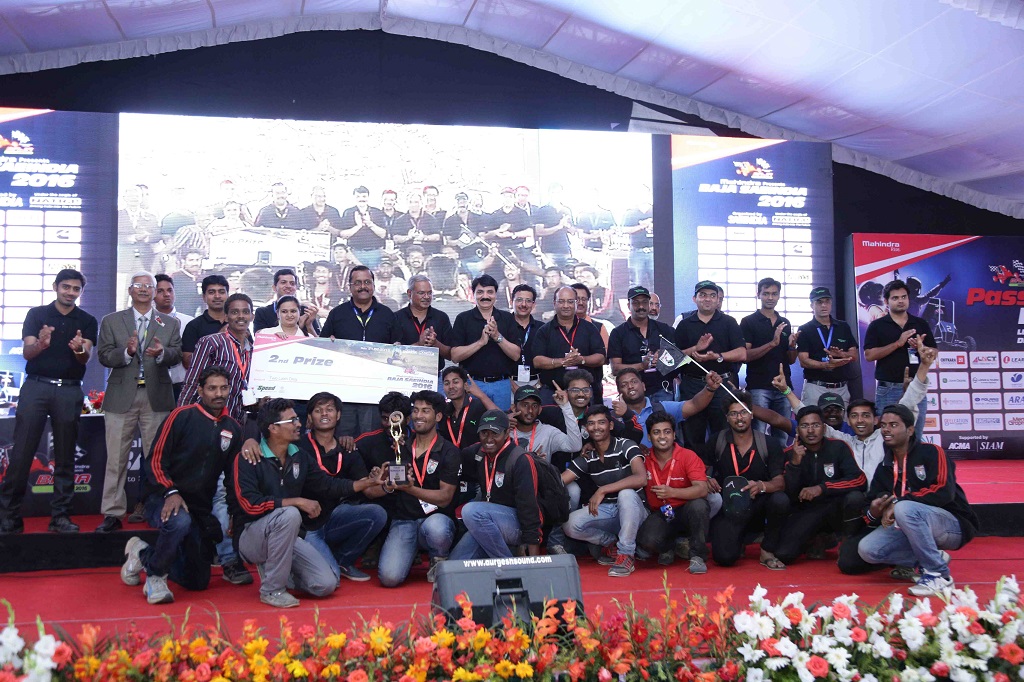 Dr. Aravind Bharadwaj, President, SAEINDIA said, “In our endeavor to foster the ‘Make in India’ initiative and achieve the global aspiration of the Indian automotive industry, it is imperative that there is a steady flow of qualified and passionate engineers from the various universities. BAJA is one such initiative from SAEINDIA that provides an opportunity for students to get hands on learning experience in vehicle design. The rapid increase in the number of teams from SAEINDIA clubs in colleges across the country and the unparalleled enthusiasm of everyone involved with this event is clear evidence that BAJA SAEINDIA is making progress in the right direction”

Mr. Sudhir Gupte, Convener, BAJA SAEINDIA 2016 said, “BAJA SAEINDIA is a platform that offers an out-of-classroom learning opportunities for the engineering students and to showcase their talent and skills in presence of auto experts. In addition to that, they learn to plan and execute their ideas by complete coordination and team work. The experience of preparing optimum design by carrying out CAD modelling and analysis by using Altair, Ansys software and development of vehicle as their design fabrication to finally testing and validating the prototype built on their own self, makes them ready for the industry. Significant inputs are provided by industry experts through several multi-locational training programs and webinars conducted throughout the year.

The experience gained helps the students to understand the environment which is similar to the industry they aspire to be part of. Amongst the thrill and adventure, we assess the abilities of participants by testing them on parameters such as leadership skills and theoretic and practical knowledge.”

The students walked away not just with the excitement and a sense of accomplishment for having competed in such a testing event, but also a fair amount of prize money as well which was about Rs. 29, 80, 000/-.

The three day event started with basic Static Evaluation round which comprised of Design Evaluation, Cost Evaluation and Marketing Presentation. In the final round, the teams showcased their prototype of a rugged single seat, off-road recreational four-wheel vehicle and were evaluated on various parameters, including engineering design, cost and technology innovation. The objective of the competition was to simulate real world engineering design projects and their related challenges. Each team’s goal was to create a safe, easily transported, easily maintained and fun to drive prototype without any direct involvement from professional fabricators. However, the teams were free to design their own transmissions with the only restriction being the speed limit to 60kmph. The Dynamic Evaluation Round tested the vehicles for acceleration, speed, hill climb and manoeuvrability and the Durability Evaluation Round saw the vehicles undergo endurance tests. The Endurance Event assessed each vehicle’s ability to operate continuously and at a speed over rough terrain containing obstacles in any weather conditions.

eBAJA is an event initiated by SC & OC of BAJA SAEINDIA which engages  more than 1000 engineering students every year. To leverage the onset of electric mobility in India we had started this event under the convenorship of Mr. Subodh Morye in 2014. This is a platform where engineering students get to build an electric vehicle on the same dynamics of BAJA rulebook and experience the wonder that this vehicle does with electric power. During a session with, His Excellency Late Dr. APJ Abdul Kalam, former president of India, he suggested the organizing committee to utilize this platform for national prosperity. Overwhelmed by his thoughts the organizing committee decided to include a new event to its 8th season – named eBAJA. As the conventional BAJA is all about petrol driven ATVs, eBAJA vehicles will run on electric power using electric motor powered by rechargeable Lithium Ion battery packs.

eBAJA an electric powered ATV design competition, lays emphasis on “Electrical Mobility”. Through this event we intent young minds of our nation get an opportunity to experiment and explore the electric science of mobility which is to be the future.

SAEINDIA is a professional engineering society of automotive engineers with a vision to continuously enrich the knowledge base of practitioners in the mobility industry and institutions in the service of humanity. It is an affiliate of the 105 year old SAE International based in U.S.A. SAEINDIA has 5000 regular members and 50,000 student members. For more details on SAE Activities, please visit www.sae.org and www.saeindia.org

Mahindra to invest Rs. 1,500 crore in Nasik Project for next phase of expansion