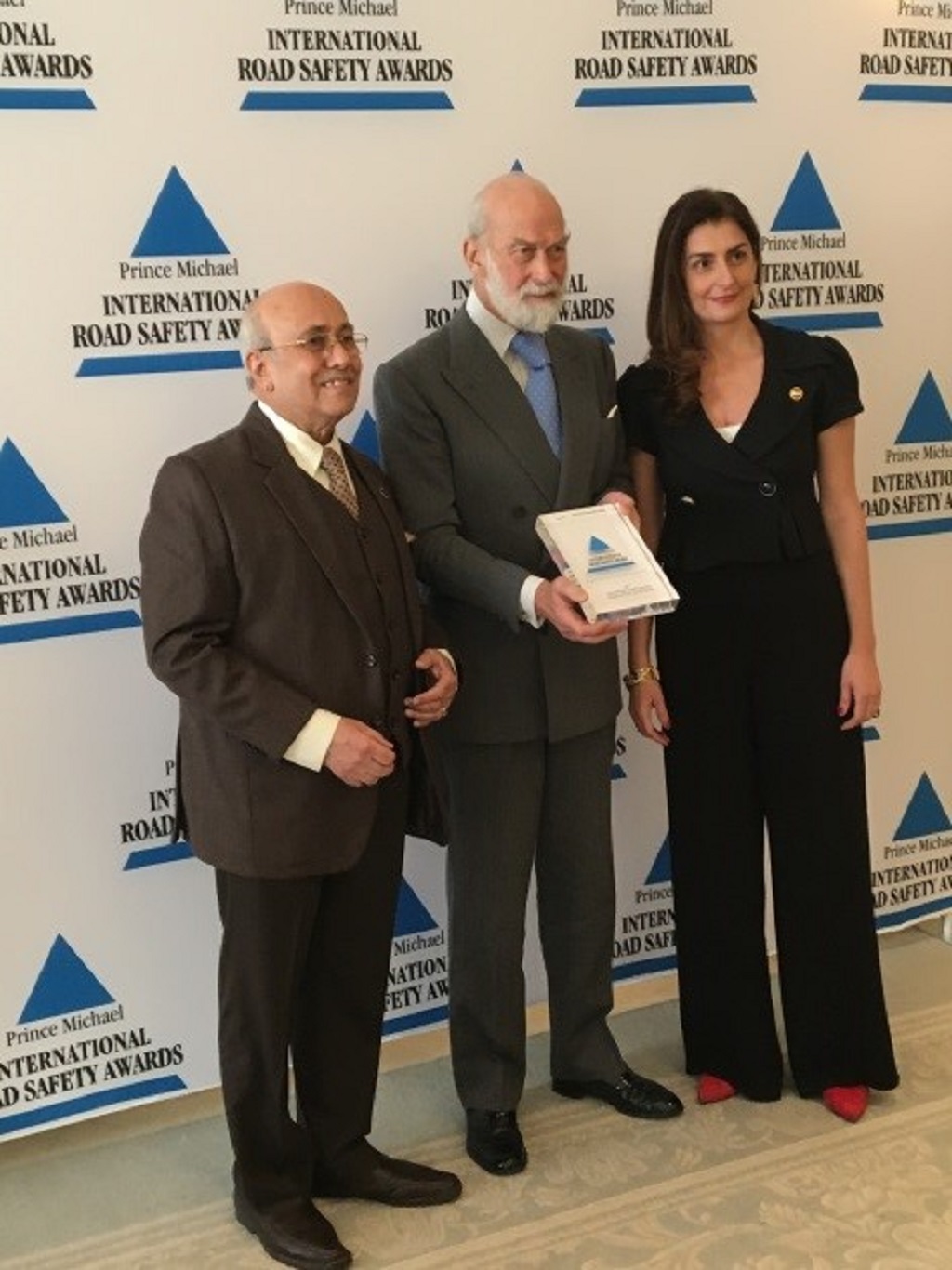 The prize was handed over to the International Road Federation (IRF)  Chairman, Mr Kiran Kapila and Mrs Susanna Zammataro, IRF Executive Director at a special ceremony held at The Savoy in London on Tuesday 12 December in the presence of His Royal Highness, Prince Michael of Kent.

Established in 1987 in the UK, the Prince Michael Award recognises annually, achievements and innovations in road safety from around the world. Each year, the most outstanding examples of international road safety initiatives are given public recognition through the scheme and the winners are invited to a Gala Presentation, hosted in London.

Since 2015, IRF has undertaken several initiatives to strengthen ‘’Pre-hospital’’ trauma care in India by developing skilled, competent and confident First Responders to intervene during the golden hour and increase survival rate of road accident victims. The Enhanced First Aid for Commercial Drivers (eFD) initiative aims at training drivers to recognize an emergency, call for help and provide a more comprehensive level of pre-hospital care

The Programme has already trained 12,000 commercial drivers in India and has now further developed into a certification programme on First Aid Trauma Care extended not only to drivers but also to bystanders and people working in the road side amenities.

“Given the shortages of ambulances, trained staff, infrastructure, systems and processes for providing emergency response services within the golden hour, the provision of first aid and trauma care to accident victims is often unduly delayed. The results of these delays reflect in higher traffic accident fatality rates, especially in low-income countries. These fatality rates can be reduced if appropriate and prompt first aid and trauma care is provided at the accident site itself” said Mr Kapila, IRF Chairman.

“We have started with drivers of commercial vehicles as they are ubiquitous users of road networks and witness road accidents from close proximity. They are thus, potential resources to play a vital role in providing immediate care as well as to transport the injured from the accident site to nearby health care facilities/trauma centres. We are delighted to be recognised with one of the most prestigious awards in our sector” added Mr Kapila.

“The eFD is a straightforward and practical approach, easily replicable in other parts of India and in the rest of the world. We are now ready to scale up the initiative counting on the precious support of public authorities and also the private sector” said Susanna Zammataro, IRF Executive Director.