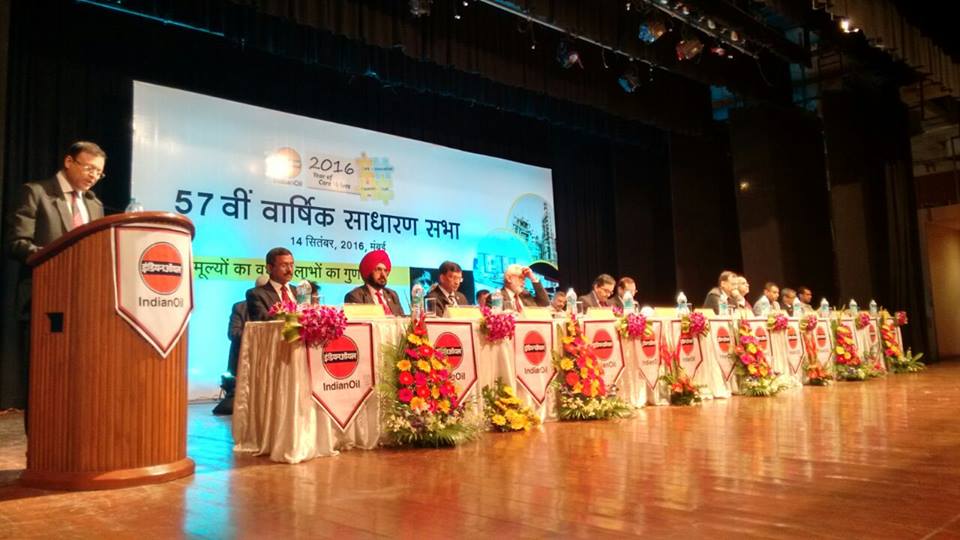 A healthy mix of shareholders from youngsters to veterans attended the IndianOil’s Annual General Meeting today in Mumbai. The annual report and the accounts were approved by the shareholders. The shareholders further approved the recommended issue of bonus shares in the proportion of 1:1. All proposals of the Board of Directors were approved with strong majorities. The FY 2015-16 witnessed new benchmarks in physical performance parameters set by all Divisions of IndianOil. The Company earned the highest ever profit of Rs. 10,399 crore for the year 2015-16.

At the meeting, IndianOil Chairman B Ashok highlighted IndianOil’s commitment to Nation: “IndianOil is planning to add about 24 million tonnes per annum refining capacity through brownfield expansions in the next five to six years. These will be concurrent to the projects being undertaken for production of environment-friendly BS-VI grade auto fuels as per the stringent timelines committed to the Government. In the wake of the rapid urbanisation and the automobile sector boom, IndianOil’s fuel stations network , currently numbering over 25,000, is headed for major expansion. We are eager to lead and contribute in the proposed mega refinery on the west coast, to be built jointly by the public sector oil marketing companies.”

Mr. Ashok’s address also touched on several in-house refining process technologies and catalysts specially suited to Indian conditions developed by IndianOil R&D Centre. He pointed out that, with its long-term orientation to be the Energy of India , IndianOil is rapidly expanding its customer base by leveraging its marketing expertise in liquid fuels. Furthermore , Mr. Ashok mentioned that the current low-price regime is most suited for Company’s ambitions for speeding up upstream integration into oil exploration & production. He said:”IndianOil sees enormous potential in petrochemicals marketing; its contribution to overall profit is giving IndianOil strength and the confidence to withstand turbulence and volatility in business.”

Talking about IndianOil performance , IndianOil Chairman again underlined the strategy that differentiates us: “Inspired by the core values of Care, Innovation, Passion & Trust , the IndianOil team has been pursuing a six-fold path to corporate excellence over the last two years. Focussing strategically on sustaining leadership in core business; operational excellence; investing in people ; financial prudence ; leveraging assets ; and enhancing corporate reputation and brand value; this pursuit has helped IndianOil put up exceptional operational and financial performance in 2015-16.”

Click here to read the full text of Chairman’s Speech at the AGM: