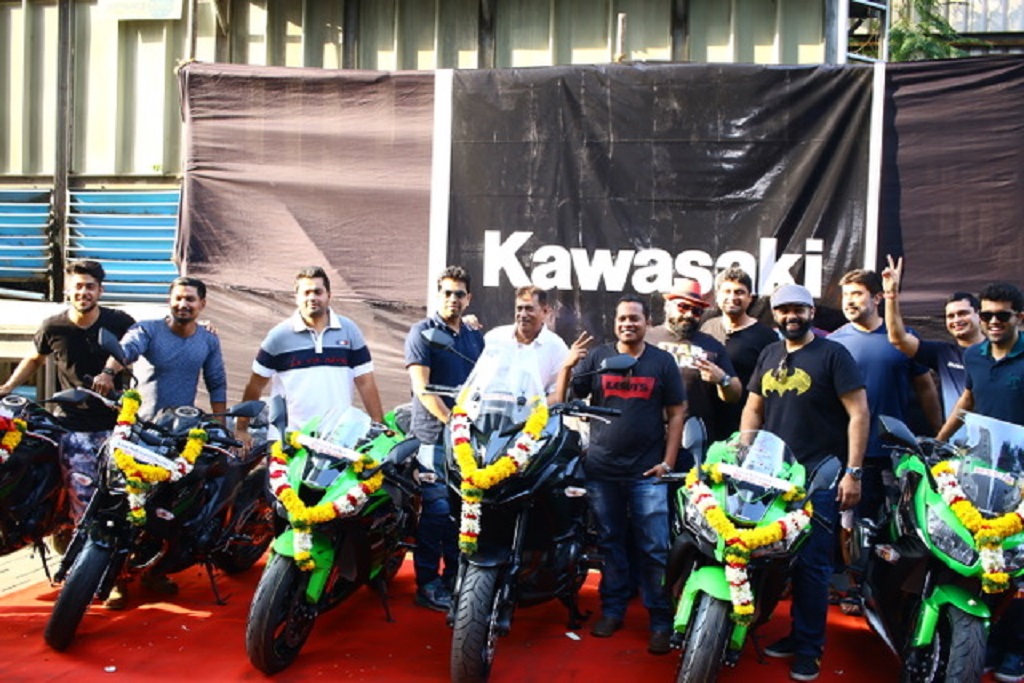 Pune, 19th October 2016. India Kawasaki Motors Pvt. Ltd (IKM), a 100 per cent subsidiary of Kawasaki Heavy Industries Japan in a bold move has delivered 13 motorcycles to its customers who have been waiting eagerly for more than six months. The customers had booked and paid a full amount for the motorcycles to SNK Palm Beach, Navi Mumbai who was IKM’s Principal Dealer for Mumbai (now ex-dealer) from June 15, 2015. The dealership was terminated on September 1, 2016 as SNK failed to deliver to its commitments towards its customers.

Customers had paid money in full to SNK and many had taken loans to buy motorcycles, who continued to pay the bank EMIs, which SNK seemed to have no intention of making refunds or deliver the motorbikes.

Tarun Khanna, Senior Manager, IKM commented, “We are happy to finally have a closure to this by receiving the necessary approvals to deliver our motorcycles to our inconvenienced customers who have been patient with us.” IKM has had numerous meetings with SNK Palm Beach to rectify the problem; however, despite repeated promises and assurances, SNK has failed to honour its commitments. He further added, “The delivery of motorcycles or refunding payments’ to the customers’ is solely the responsibility of SNK, IKM took it upon itself, as a gesture of goodwill, to deliver the motorcycles through its dealer network. IKM is committed to its customers and is dedicated to develop its business and investments in India”.

Fuzail Amin Qureshi, one of the customers, who received his Kawasaki Z800 commented, “We have invested our savings in these motorcycles and have waited for 5-months and it’s a positive move taken by IKM to take it on them and deliver our motorcycles”.

IKM will also file a criminal case against SNK and will pursue this matter with the help of its lawyers and the Indian judicial system. IKM would like to assure its customers that they are committed to them and it has always been their endeavour to provide the best possible experience.

Rich with a history for being at the forefront of technological innovation, Kawasaki Heavy Industries Ltd. has a number of technological divisions such as aerospace, rolling stock, ship building and energy solutions. They are also active in a number of wide ranging businesses such as industrial plants, robotics and motorcycles to name a few.

The Kawasaki name represents a technological enterprise whose activities range from large-scale, international projects to items used in daily life and for recreation. And at every step, Kawasaki pays the utmost attention to humankind and the environment. The past 120 years of innovation has enabled Kawasaki to establish a firm foundation as a leading technological enterprise. Now, the company is fully prepared to welcome the new century and looks forward to playing a leading role in the advancement of humankind and to another century of innovation.

Bringing this technological capability to India, IKM is continuing to develop and grow the motorcycle business market in India, by manufacturing 5 CKD models at their manufacturing plant in Akurdi, Pune and marketing 8 CBU models imported directly from Japan.

India Kawasaki Motors Pvt. Ltd (IKM), a 100 per cent subsidiary of Kawasaki Heavy Industries Japan in a bold move has delivered 13 motorcycles to its customers who have been waiting eagerly for more than […]