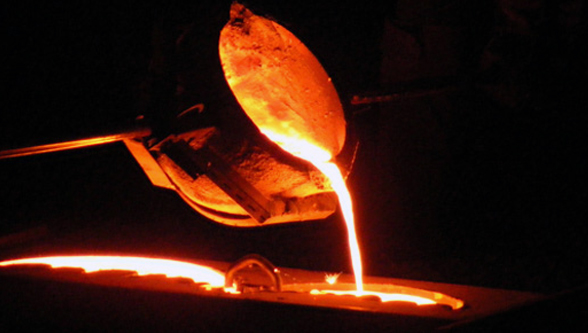 The disruption caused by the Corona Virus has affected the automobile industry thereby the automotive components and hence the forging industry. While the industry was reviving post the pandemic, the increase in steel prices has hammered the Forging Industry in India. Forging Steel manufacturers have hiked the price by 10% over the last six months, and have now sought a further 15% increase,the initial increase itself was all but impossible to sustain, the further increase will prove to be disastrous.Steel is the basic raw material for The Forging Industry and typically constitutes 60 to 65% of the ex-factory value of forgings, with these two increases this is expected to rise to around 75%,with such an increase in percentage of the input cost, survival of the industry has become challenging.

At the moment, the prices of steel are at unprecedenthighs. Increased demand amid low allocation of production for the domestic marketcoupled with minimal imports due to import restrictions imposed by the Government of India, domestic steel manufacturers have increased the prices twice in the current quarter for forging quality steel and three times in the current month for other types of steel, bringing the benchmark hot-rolled coil prices in the wholesale market (ex-Mumbai) to Rs 52,000 per ton from only 36,500 per ton in July, that’s a rise of 43 percent, an indicator that the prices of forging quality steel will be further revised upwards in the immediate future in line with the increases in the prices in Hot Rolled Coil prices.

The price increases of steel in the domestic market are due to the increase in exports to neighboring countries and resultant reduction in supply within the domestic market has resulted in Indian prices, moving contrarian to the prices of steel in the European and American markets, thereby reducing the price competitiveness of the Indian manufactures in these markets, besides forcing the manufacturers to absorb the increases on existing orders, resulting in them incurring losses on them.

The same is illustrated on the table below: 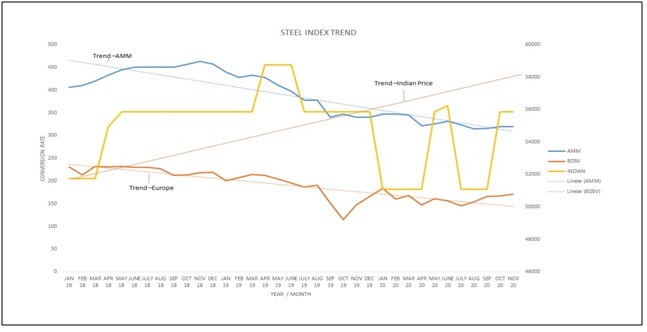 Apart from the increased export of Steel, India’s iron ore exports to have increased by 63%. This increase in exports is mainly motivated by the record steel production of the world’s largest steel manufacturer—China. In FY20, India’s iron exports increased by 133% to 37.69 million tons over the period April-July 2020 compared to the corresponding period in FY19. And more than 80% of these exports have been to China. Hence domestically produced iron ore in India has met the needs of another country before catering to our own requirements.If Indian steel price are higher than international steel price that will lead to exports becoming uncompetitive. Export rates have risen sharply in post COVID and they have almost doubled.

Mr. Vikas Bajaj, President, AIFI said“Steel prices have increased by 25 to 30% per cent in the last three months, putting the forging industry at serious risk, particularly when we are still recovering from COVID-inflicted business losses and the resultant pressure on cash flow, and cash reserves. The industry is still going through a very difficult time and is not in a position to absorb losses. I believe that rising demand for steel, low steel production for the domestic market due to increased steel exports are the prime reasons for price hikes. The Forging Association requests the government to consider a ban on steel and iron ore exports so that demand of steel within the country can be met in a cost / price effective manner”.

Steel accounts for 7 % of the country’s GDP, as steel prices have increased by 10 % and are projected to increase by another 15 %, that could ultimately have an inflation rise of about 1.5 %. If inflation increases, it will result in higher interest rates, leading to a slowdown of the economy.

India’s exports of finished and semi-finished steel to China increased sharply in this financial year despite the growing border tensions. Also, India’s overall iron and steel exports to China in the first five months of this fiscal year were more than three times the amount for the entire fiscal year 2019-20.

Impact on Forging Industry: Indian Forging Industry is one of the key players in the auto component manufacturing sector and a major contributor to the Government’s Make in India initiative. The Industry apart from catering to the automotive sector, solar, aerospace, railways and wind sector also plays a key role in contributingto the forex by way of huge exports. The current overall capacity utilization of Forging Industry stands around 50 to 55% against a normal of 65% and the Industry provides direct employment to 250,000 plus people and indirect employment to approx. 250,000 people against 600,000 earlier. The industry has turnover of around 34000 crores.

Mr. Yash JinendraMunot, Vice President, AIFI said “Export of steel is the major reason for the rate hike. Large mills are preferring to export steel to neighboring countries. Also, orders have been booked for Europe, the Middle East, etc., which is one reason for the shortage of steel in India. Thus, steel companies are in a position to increase prices at their will due to the gap in supply and demand. The Government should consider banning the export of steel and Iron Ore for the next six to eight months or till such time that the local demand is met and should look at regulating steel prices for domestic consumption.

Another factor that can be attributed to steel manufacturers to increase prices is minimal imports from other countries. Japan and Korea, the main two exporting countries to India apart from China, are exporting more to Europe due to the restrictions placed upon imports into India by the Government of India.