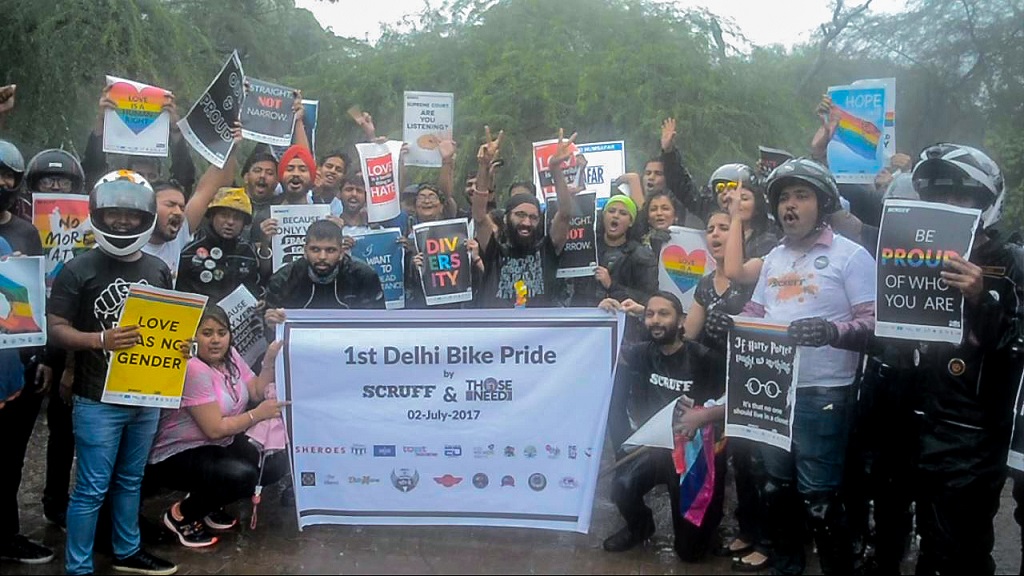 While the cloud thundered and it showered in the capital city of Delhi, the LGBTQIA community came out on roads for the First Bike Pride of the city and of the country.  02-July is recognised as a significant date for LGBTQIA community as the High court of Delhi read down section 377 in 2009. This decision was further reversed by the Supreme Court in 2013 but still – the date of 02-July is remembered as the day of victory. To celebrate this day, SCRUFF & Those In Need came together to organise the First ever Delhi Bike Pride. While it poured heavily, the participants still stepped out of their homes early in morning and became a part of it. The ride began while the participants were drenched completely. This also signified the spirit of the struggle and how this struggle for equality just can not stop – no matter what obstacles are in between. The road was full of colours with smiling faces – riding for equality.

It was beautiful to see how the allies joined the ride. While many of the allies – both men and women – were riding, a number of community members became the pillion members – signifying how the support of the allies to the community to take the movement ahead.

The march started from Lakshman Dhaba near IIFT where Harsh Agarwal, Yashwinder Singh and Gautam Yadav explained further the importance of this date and where does the community stand right now – from both legal and social perspective.

The march ended at Hauz Khas Village where the participants marched in circles and flew rainbow balloons in the sky while some of them stood with posters and banners with messages of equality, diversity and to end hate for the LGBTQIA community – all while it rained heavily.

“On behalf of SCRUFF, I’d like to thank all participants that joined the First Delhi Bike Pride as we commemorated a day of victory for the LGBTQIA community when Section 377 IPC was read down on July 2, 2009. Although the Supreme Court of India reversed that decision in 2013, this day continues to serve as a reminder that our community’s rights are worth fighting for, and SCRUFF supports initiatives that aim to advance equal LGBTQIA rights in India.” –

Abhishek Saini, Co-founder of Those In Need said,

“We are happy and thankful that the participants from the community and the allies came out while it rained heavily. The determination of the participants is worth to applaud for and that was something that made this landmark event possible. Hoping for more such collaborations between the LGBTQIA community and the allies for the struggle of equality to take a step ahead.”

“It is good to see such new events coming up to raise our voice against the inequality, discrimination and bullying that we have to live with. Hope that this sends a strong message in the society that the LGBTQIA community exists and demands its rights.”

SCRUFF is a global dating, travelling and social networking app for men looking to meet other men. SCRUFF – is a socially responsible organisation and aims to grow with the communities in the country they operate in. Having experienced exponential growth in India, SCRUFF has supported film festivals, prides, regular parties and organised flashmob with the aim to engage and strengthen the Indian LGBTQ community.

About Those In Need:

Those In Need is a Not-For- Profit organization child of Lending Hands Foundation – which has as mission to work for the welfare of minorities. Through civil society engagement, volunteers support community development by organizing resources and obtaining an effective response. Those In Need provides a network platform to various NGOs, volunteers, educational institutions and others to maximise the impact of their philanthropic efforts. Website: www.thoseinneed.in