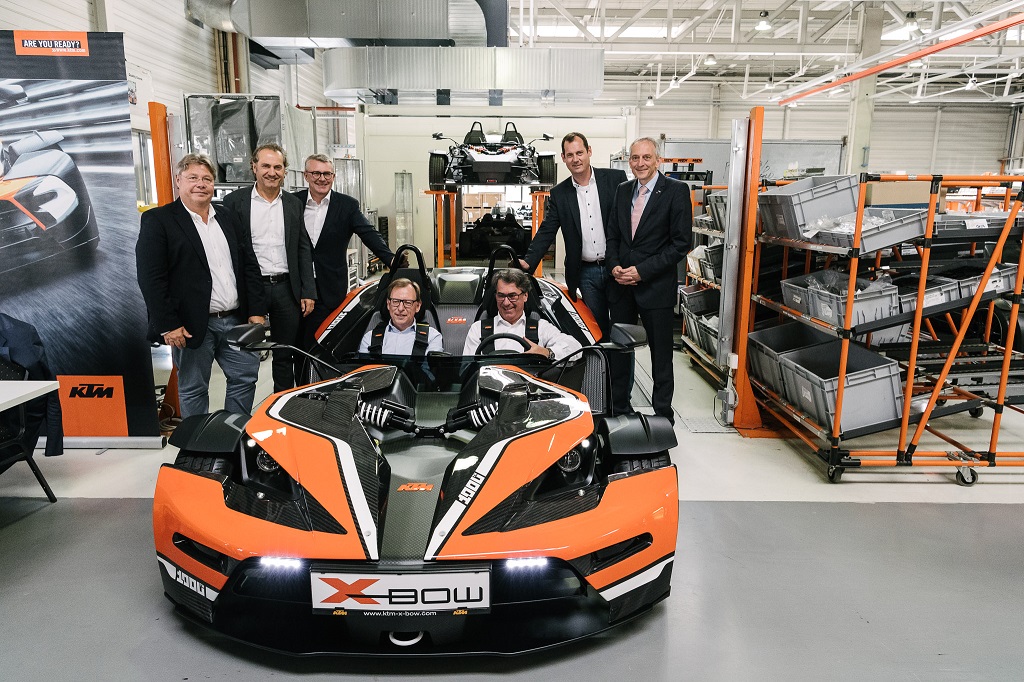 KTM CEO Stefan Pierer: “A success story in so many ways”
During the press conference, KTM CEO Stefan Pierer first emphasized the importance of the unique supercar to the KTM Group: “Firstly, it has changed the way that KTM is perceived in the automotive industry. Not many people believed that we could succeed in getting such an extraordinary vehicle on the road. The fact that this didn’t turn out to be a flash in the pan, despite all the challenges we faced, has also improved our reputation. In addition to the production plant in Graz – a popular showcase of Styrian technological prowess – subsidiaries such as Salzburg-based KTM Technologies have also been established, which play a crucial role when it comes to technological innovation within our Group.” 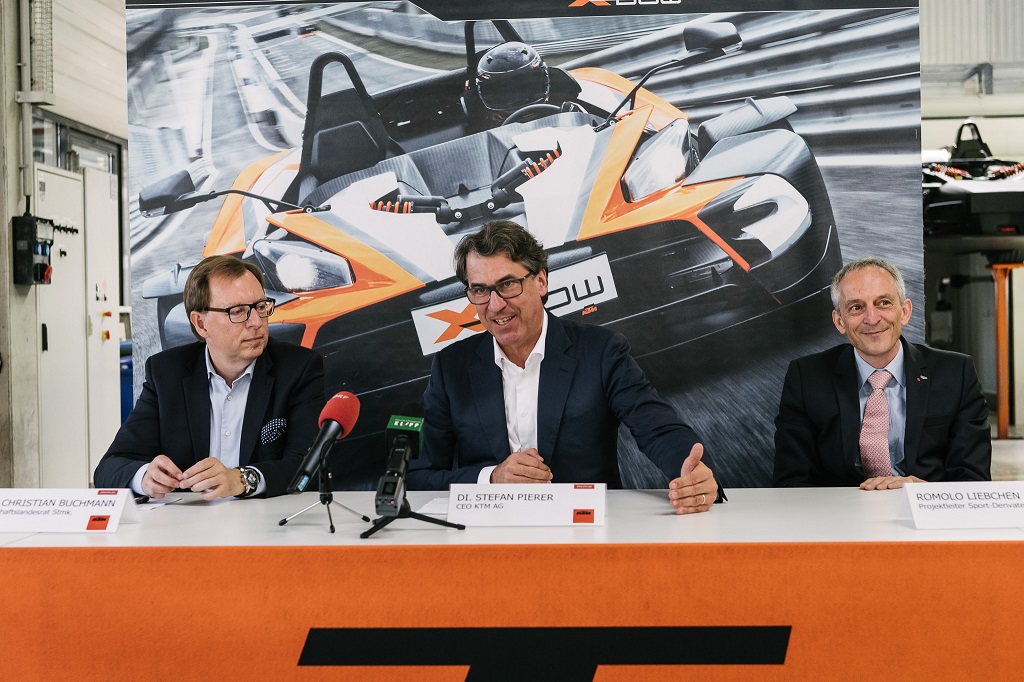 Pierer stressed that the KTM X-BOW is also an economic success story: “This was of course a steep learning curve for us, in part due to the global economic crisis that started when the product was launched. However, after selling 1,000 cars to many delighted and enthusiastic customers, the KTM X-BOW cannot be seen as anything other than a success story – especially in purely economic terms!”

The KTM majority shareholder and Chairman of the Executive Board is also putting a lot of thought into the future of the KTM X-BOW:“We have successfully established ourselves in the extremely specialist niche of lightweight supercars, and we are the largest small series manufacturer in mainland Europe. Thanks to Georg Silbermayr, organizer of the X-BOW BATTLE, we have one of the most successful one-make cups in Europe. And with the high-tech KTM X-BOW GT4 race car developed in collaboration with Hans Reiter and Reiter Engineering, we have also achieved international success in the field of customer racing. We will of course be continuing this success story in the future, and with Gerald Kiska as the designer, the development team for the KTM X-BOW are already coming up with some exciting ideas!”

Minister Christian Buchmann: “An ambassador beyond Austrian borders”
Dr. Christian Buchmann, Styrian Minister of Economic Affairs, also attended the Graz factory to take part in the anniversary celebrations, where he made the following statement: “The KTM X-BOW is an ambassador for the Styrian flair for innovation in the automotive sector – and not just in Austria. The production of this supercar in Graz is an international showcase project.”

According to Buchmann, this was all made possible thanks to the commitment and passion shown by KTM CEO Stefan Pierer: “Last year we were able to welcome Stefan Pierer and KTM parent company CROSS Industries as a new partner in our ACstyria mobility cluster. The business location – and in particular ACstyria’s 250 partner companies – benefit from the innovative flair demonstrated by CROSS Industries and its subsidiaries, such as Pankl Racing Systems or KTM itself. This creates added value and jobs for both small and medium-sized suppliers.”

Audi AG Project Manager Romolo Liebchen: “Showcase for Vorsprung durch Technik”
KTM’s X-BOW project was only made possible with the help of Italian sports car chassis manufacturer Dallara and support and technical assistance from Audi. Romolo Liebchen, project manager for sport derivatives at Audi AG/quattro GmbH, supported the development of the vehicle and the collaboration between Audi and KTM right from the start. “Working with KTM was also very exciting for us. Some of the technologies used, such as the full carbon monocoque or extreme aerodynamic downforce, had never even been considered before in series car production. This presented us with completely new challenges, which we have overcome together with KTM. I cannot think of a better showcase project than the KTM X-BOW to affirm our company motto ‘Vorsprung durch Technik’ and competence as an engine and components supplier. We are looking forward to a bright future with KTM and to continuing our successful partnership!”

KTM CSO Hubert Trunkenpolz: “We have set new standards in customer racing”
KTM CEO Stefan Pierer was naturally joined by his colleagues on the KTM board, including CSO Hubert Trunkenpolz, COO Harald Plöckinger, CFO Friedrich Roithner and CFO Viktor Sigl. CSO Hubert Trunkenpolz, who occasionally gets behind the wheel of a KTM X-BOW racer in his spare time, spoke on behalf of his fellow board members: “We have set new standards in customer racing on account of our revolutionary concept. Thanks to the technology used, the KTM X-BOW race car is extremely safe and very cheap to run. This combination is attractive to semi-professional as well as professional drivers and teams, and I am confident that the KTM X-BOW GT4 in particular will bring us many more international successes in the future!”

The 1,000th KTM X-BOW and the facelift for the KTM X-BOW R
The 1,000th model is not a “standard” KTM X-BOW, but rather the first KTM X-BOW R to get a facelift. Careful renewal of the body elements, based on the 2013 KTM X-BOW GT with its fixed windscreen and glass side doors, has attracted a wider variety of customers. The change in design approach taken by Gerald Kiska and his team can also be seen in the “R” version.

The body elements have a more vivid appearance, and sharply drawn lines help to structure surfaces clearly. The engine cover, which now has grill-like ventilation slits (similar to the GT), connects extensively with the rear bodywork elements, which make the rear part of the vehicle appear even more muscular and powerful thanks to its new shape. The front of the car also received a makeover: the headlamp surrounds have become narrower and the front body elements sit on the front splitter at a distinctive angle – the entire front section exudes raw power.

The technical basis of the vehicle is the tried-and-tested complete package, including the 2.0 litre TFSI engine from Audi with 300 PS, however with a few minor improvements. The new net purchase price is 74,900 euros (excl. VAT).

The KTM X-BOW is coming to the North American market in 2017!
All good things come in threes, just like the latest ingenious addition to the X-BOW project from KTM. Together with Audi, a solution has been found for the launch in North America – it looks as though the first vehicles designed specifically for the North American market will be arriving in the US and Canada in spring 2017. In the meantime KTM Sportcar GmbH will gain a North American subsidiary, along with a small network of dealers selected exclusively for the planned “Track Day” car. 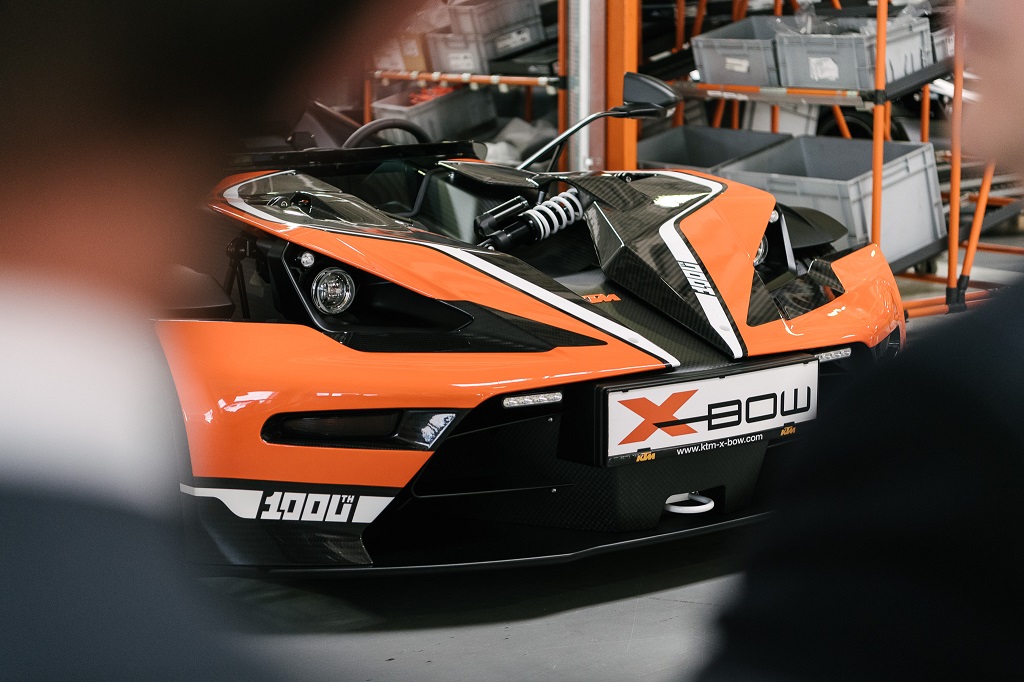