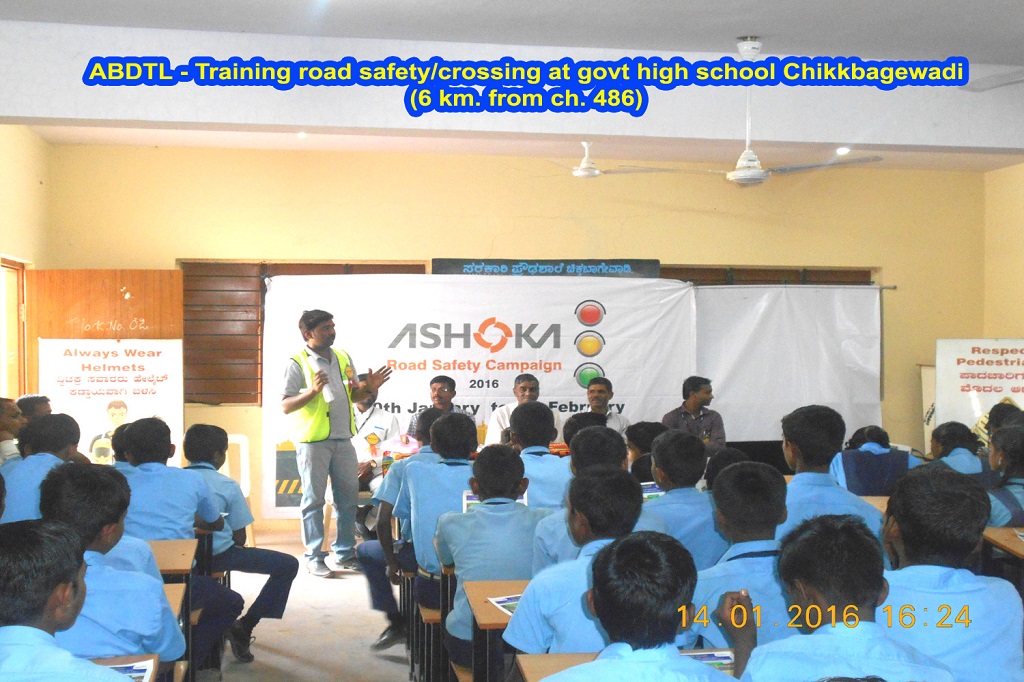 Ashoka Concessions Ltd., a subsidiary of the Ashoka Buildcon Limited (one of India’s largest BOT based highway developers), has launched its Road Safety awareness campaign for 2016. This month long campaign is scheduled from 10th of January to 9th of February 2016. Every year the company celebrates Traffic Safety Month with a focus on encouraging road safety practices amongst employees as well as road users.

The major highlight of this year’s campaign is that the company is conducting safety related lectures at over 200 plus schools. The spirit behind this mission is that these youngsters would soon be driving their own vehicles and it is important thath they are well informed about traffic rules. The company beleives that these students will be the bearers of a future where traffic rules are respected and followed

The Campaign will include multiple activities working with local administrative bodies, over 200 schools and hospitals in an effort to spread the message of road safety. Volunteers will also be interacting and requesting commuters who pass by Ashoka’s toll plazas to observe basic safety rules while driving. The activitiy will be conducted in and around  20 road projects of Ashoka in  West Bengal, Orissa, Karnataka, Tamil Nadu,  Madhya Pradesh, Chattisgarh, Maharashtra

Ashoka has donated Alcohol Breath Analyzers and speed guns to the police department at various locations.

It has been observed that many truck drivers are unaware that they are suffering from poor vision. This often results in accidents. Ashoka will be conducting free eye check up camps for truck drivers.

Human flagmen are exposed to dangers of being hit by fast moving vehicles. Ashoka is installing robotic flagmen and other modern traffic diversion devises in order to avoid such accidents. Ashoka is also conducting special safety training sessions for laborers at road construction project sites.

To reinforce the message of safety, team Ashoka has lined up activities which include Safety Message Signages at Toll Plazas, Hoardings and also the Toll Tickets with messages. Also, volunteers from the staff members would extend a gentle request to commuters to drive safely. ‘Please wear your seatbelt’, ‘don’t drink and drive’, ‘Please respect speed limits’, ‘Please don’t talk on your cell phone while driving’, will be some of the messages to be used during the campaign which aims to reach out to the thousands of vehicles driving across the highways of Ashoka. Public adress system at toll plazas are being utilised for announcement of safety messages.

Mr. Ashish Katariya, Managing Director , Ashoka Concessions Ltd., ‘Safety is a collective responsibility and we are trying to encourage commuters, workers and drivers to help us in reducing fatalities and accidents on highways. We are also conducting seminars at schools and colleges as theyrepresent the future of our country. Their exposure to speeding and stunts, as glamourised in movies, needs to be countered with awareness regarding the dangers of  ignoring traffic rules. Change will not come overnight, but continual efforts will definitely make a difference.”

Ashoka Buildcon Ltd is today the only private sector company to have maximum number of 28 BOT projects. Currently the company is executing prestigious projects in the states of Maharashtra, Madhya Pradesh , Chattisgarh, West Bengal, Orrisa , Tamilnadu and Karnataka.

Ashoka witnessed the first private equity placement from a pedigreed investor, IDFC Private Equity in 2006. The company got listed in 2010