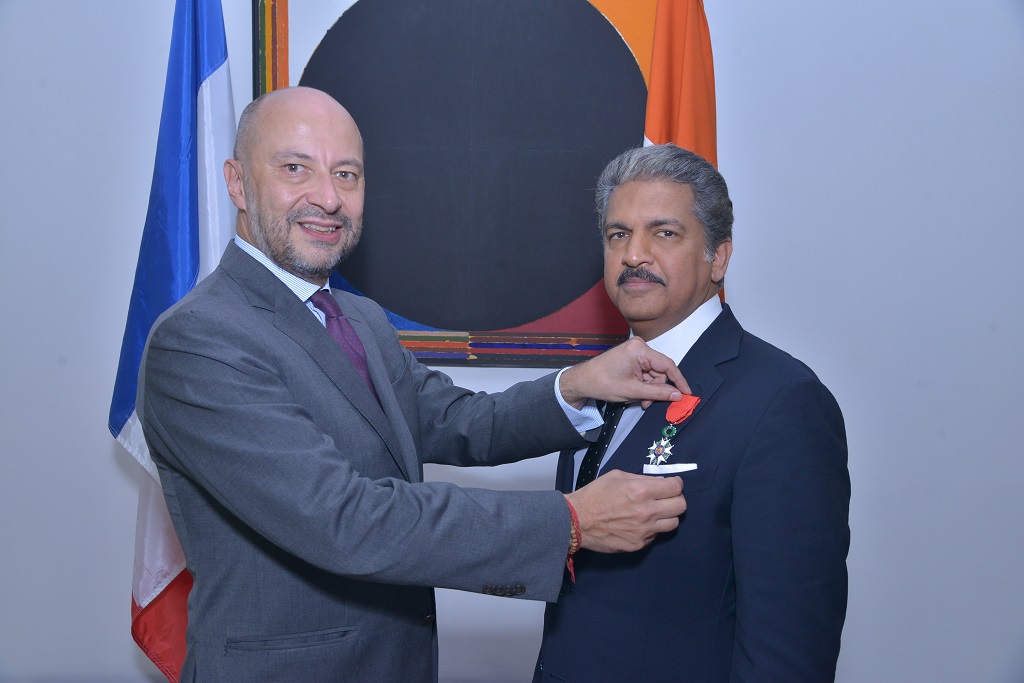 H.E. Mr François Richier, Ambassador of France to India, conferred the Chevalier de la Légion d’Honneur (Knight of the Legion of Honour) on Mr Anand G. Mahindra, Chairman and Managing Director of Mahindra & Mahindra, at the Residence of France on 5th March 2016. The highest French civilian distinction came in recognition of Mr Anand Mahindra’s outstanding national and international achievements and initiatives at the helm of the Mahindra Group.

Mr Mahindra is recognized as one of the most prominent business leaders in India, who has turned Mahindra & Mahindra into a global company of outstanding repute.

Under his leadership, fruitful partnerships have been developed, among many others, between French and Indian industries: with French auto manufacturer Renault in India; with Peugeot Scooters France, after its acquisition by the Mahindra Group in 2014; and Tech Mahindra interests in France (commercial office in Paris and R&D and engineering centre in Toulouse). For his wide-ranging expertise, he is often called on to serve on various boards and committees: at the French President’s invitation, he participated in the Strategic Attractiveness Council in Paris (17 February and 19 October 2014), which brought together 25 company heads from across the world.

Apart from his numerous industry triumphs, Mr Mahindra is also known for his philanthropy and promotion of both primary and higher education. In 2014, Mahindra Ecole Centrale College of Engineering was founded in Hyderabad through the joint collaboration of the Mahindra Group and the prestigious Ecole Centrale Paris engineering college

Mahindra Truck & Bus Division launches a first of its kind book on road safety, titled – ‘Have A Safe Journey’

‘Have a Safe Journey’ propagates road safety through short stories The book launch is a culmination of a unique road safety initiative jointly partnered by Ministry of Road Transport & Highways, Mahindra Truck & Bus […]