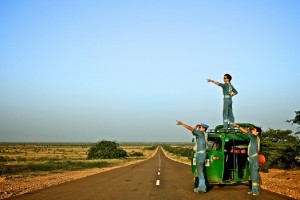 Jaisalmer, Rajasthan – Shillong Meghalaya – The Rickshaw Run is about to hit the road again. A peerless adventure organised by UK travel outfit, The League of Adventurists, this April will be the twenty third edition and it shows no sign of losing its popularity. Since the first event in 2006, the Rickshaw Run has been growing in numbers and is now the largest event on three wheels in the world.

The brave teams are now coming from across the globe to Jaisalmer as they prepare to take on the drive of a lifetime. They’ll have thirteen days to get from Jailsalmer to Shillong, Meghalaya. The only acceptable means of transport is the humble auto-rickshaw. Each team of three will get their own vessel, painted to their unique design, for them to become familiar with over the course of the 3500kms. What makes this journey even more impressive is the fact that each team raises £1000 for charity with half of this sum going to rainforest preservation charity, Cool Earth.

They’ll be seen off from the startline with a party worthy of the majesty of Jaisalmer before they set out on 4th April. The teams will have no set route, no back up and are on their own to explore India. Their only appointment is with their fellow teams at the finish line in Shillong. They may break down and they may face tough times but whether they drive, roll or wiggle there, they’ll have to make it by the 16th April.

Event Manager Matthew Dickens has been at the Rickshaw Run helm for six years and knows to maintain a stiff British upper lip as he guides a new set of recruits to the startline: “This event certainly has a lighter side, but the important message is clear…We plan to introduce our participants to the real India – this is not a typical package holiday. The less help we can give the teams, the more they learn to rely on themselves, their friends and the hospitality of the Indian people. When the teams are lost, stuck and all hope seems futile, Mother India and the heart-warming generosity of the Indian people shall envelope them in a fondness that many would not have encountered before. We also like to bring attention to the beauty of lesser travelled places such as Jaisalmer and Shillong. Needless to say we’re thrilled to be raising an awfully large amount of money for worthy charities across the nation too. The Rickshaw Run has now raised well over £2,000,000 (around $3.1 million) – which is a huge boost to the good work that these charities and our official charity Cool Earth are doing. In fact, each Rickshaw Run raises enough money for Cool Earth to save 150,000 trees in some of the most endangered rainforest in the world.”

The Rickshaw Run has now been going to Jaisalmer for five years. Mr Dickens goes on to say:

“Jaisalmer is a place dripping with history and the sandstone fort rising majestically from the middle of the Thar desert screams adventure like possibly nowhere else in India.”

Shillong is a truly worthy finish line. Rising majestically from the hills, there’s nowhere more suitable to finish a British-run adventure than with a trip to the Scotland of the East.

For many of the participants April will be full of firsts – whether it’s travelling to India, driving a rickshaw or just experiencing the enthusiasm and love that the people of this country are so famous for.

The next few days as the participants pour into Jaisalmer will no doubt be packed with energy, colour, noise, nerves and excitement. Let the merriment begin! Look out for teams with names such as Never a Dahl Moment, and Live and let Chai – this is an event with fun at its heart.

The League of Adventurists International currently organises seven events worldwide including the Mongol Rally, the world’s largest car rally and the Mongol Derby the longest horse race in the world respectively.

Schedule of events in Jaisalmer: