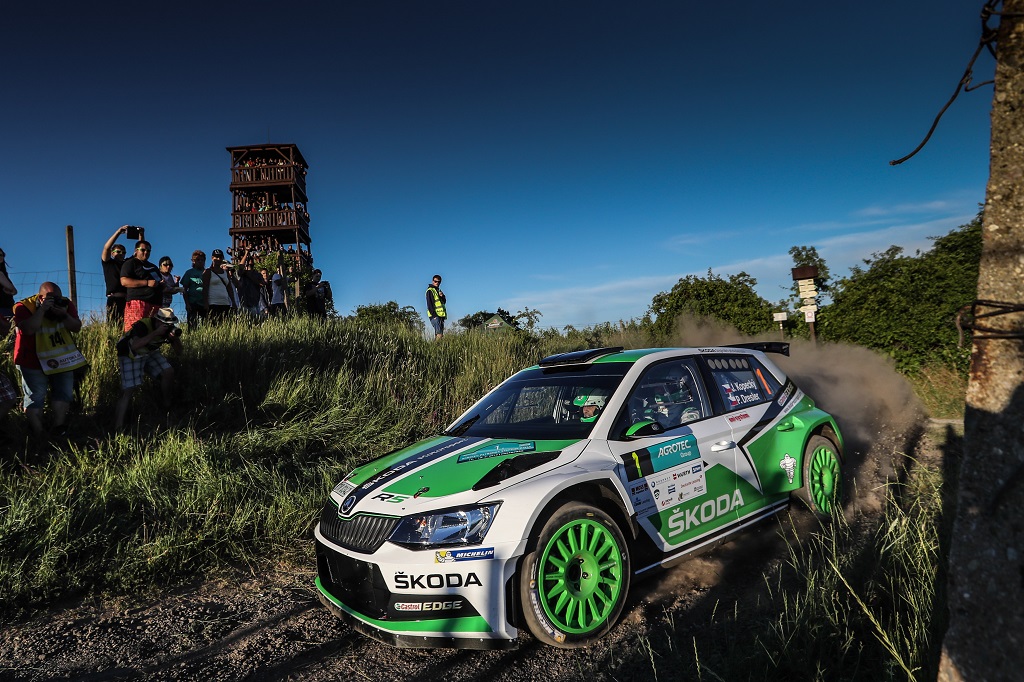 Cheered on by thousands of fans, the ŠKODA works duo Jan Kopecký/Pavel Dresler (CZ/CZ) completed a hat-trick of victories in this year’s Czech Rally Championship (MČR). The experienced pair won the Rally Hustopeče on Saturday after a dramatic battle with fellow ŠKODA drivers Pavel Valoušek/Veronika Havelková (CZ/CZ). The ŠKODA FABIA R5 was the best rally car in the field throughout the 150 special stage kilometres among the vineyards of South Moravia.

“That was the perfect end to the first half of the season in the Czech Rally Championship. First of all, we got second place in the WRC 2 at the world championship race in Italy last Sunday, and now we have won at the Rally Hustopeče”. ŠKODA Motorsport Director Michal Hrabánek was full of praise for Jan Kopecký and Pavel Dresler, who “produced outstanding results after a challenging few days. The atmosphere in the ŠKODA Park and at the circuit was fantastic once again at the Rally Hustopeče. All ŠKODA Teams put on a great show for the numerous fans in South Moravia.”

The drivers did indeed deliver top-quality rally entertainment on the tight, bumpy and dusty asphalt of the twelve special stages. ŠKODA works driver Jan Kopecký took the lead right from the start, and was able to reclaim this position after dropping to second place behind Pavel Valoušek after a minor error in the Bořetice 2 stage. A fascinating duel developed between the two ŠKODA FABIA R5 drivers during the three stages after dark on Friday evening. The battle continued on Saturday, before Jan Kopecký claimed victory, 28.0 seconds ahead of Valoušek.

This was his third win of the season in the national championship, having already tasted victory at the Rally Šumava Klatovy and the Rally Český Krumlov. The reigning Czech champion has now won each of the eight national championship races in which he has competed in 2015 and 2016, spanning this season and the last. “The Rally Hustopeče is always a special rally for us, thanks to the particular track conditions. I was lucky that my error at the start of the rally did not lose me more time. It was a great battle with Pavel Valoušek, which makes this win even more valuable,” commented Kopecký.

ŠKODA Media Services:  http://media.skoda-auto.com, media@skoda-auto.cz ŠKODA AUTO a.s., Tř. V. Klementa 869,  293 60 Mladá Boleslav, Czech Republic number of wins for this event. Kopecký extended his lead in the overall MČR standings and is the clear leader at the halfway point, after three of six races. Vojtěch Štajf (CZ) also produced a strong performance. The ŠKODA customer from the Klokočka ŠKODA Czech National Team finished in fourth place at the Rally Hustopeče, recording his best result of the year. “The ŠKODA FABIA R5 worked wonderfully. We can still have a lot of fun this season,” commented Štajf.

It is only two weeks until the next race in the Czech Rally Championship, the Rally Bohemia (2/3 July). Jan Kopecký/Pavel Dresler will start with home advantage around the ŠKODA brand Championship (WRC 2) on the same weekend, featuring the works duos Esapekka Lappi/Janne Ferm (FIN/FIN) and Pontus Tidemand/Jonas Andersson (S/S) for the ŠKODA Motorsport team.

The number for the Rally Hustopeče: 9